Ajagba got up from a third-round knockdown, continued battering a remarkably brave Kiladze and stopped him in the fifth round on the Tony Harrison-Jermell Charlo undercard at Toyota Arena. Kiladze’s trainer threw in the towel late in the fifth round because the courageous Georgia native was taking a beating from the hard-hitting Nigerian prospect.

Referee Thomas Taylor stopped their scheduled 10-rounder at 2:09 of the fifth round. The 6-feet-6, 230-pound Ajagba knocked down Kiladze once apiece in the third and fifth rounds, and landed numerous flush right hands to his head during their action-packed battle. 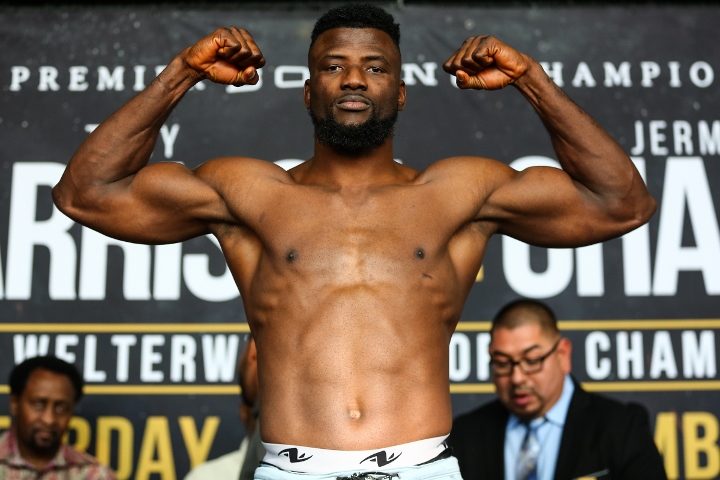 Ajagba (12-0, 10 KOs), a 2016 Nigerian Olympian, fought for the first time since defeating Turkey’s Ali Eren Demirezen (11-1, 10 KOs) by unanimous decision in what was a closely contested fight July 20 at MGM Grand Garden Arena in Las Vegas. That marked the first time that Ajagba went the distance as a pro.

His fight against Kiladze seemed destined to end inside the distance because Kiladze (26-5-1, 18 KOs) had previously been stopped by Adam Kownacki, Michael Hunter and Joe Joyce in three straight fights in 2018.

A crushing right hand by Ajagba knocked Kiladze to the canvas with about 1:45 to go in the fifth round. Kiladze courageously got up again and tried to fight out of the trouble.

Ajagba tried his best to finish him off before Kiladze’s trainer wisely threw in the towel.

Kiladze knocked down Ajagba in a highly unusual sequence during the third round.

A right hand by Ajagba wobbled Kiladze badly in the final minute of the third. Kiladze stumbled backward and Ajagba backed away because he thought Kiladze would go down again.

Kiladze didn’t just remain on his feet. He landed a punishing right hand of his own several seconds later that knocked down Ajagba for the first time in the huge Nigerian’s pro career.

A stunned Kiladze beat Taylor’s count and somehow made it to the bell to end the second round.

Ajagba drilled Kiladze with a straight right hand that wobbled him just before the halfway point of the opening round. Kiladze clipped Ajagba with a right later in the first round that got his attention, too.

[QUOTE=JakeTheBoxer;20276539]Kiladze already fought Joyce, Kownacki and Hunter.[/QUOTE] You are right ...... I forgot they last year. Hunter is brutal with decent power.

[QUOTE=Laligalaliga;20275258]Calling kiladze a C level fighter or a bum is a disrespect to that warrior. He gave his all, and has a heart of a lion. I would love to see him with DDD, JJ or hunter. Great fight.[/QUOTE] Kiladze…

[QUOTE=Oldskoolg;20272106]Egjaba is basic. Will be a contender at most but not championship material. He is just too robotic, keeps his hands too low, and never seems to throw the left hook.[/QUOTE] Take it easy man.....ajagba is just 12 fights in…

Calling kiladze a C level fighter or a bum is a disrespect to that warrior. He gave his all, and has a heart of a lion. I would love to see him with DDD, JJ or hunter. Great fight.