Efe Ajagba: Fights Like Kiladze Will Help Me Perform Better

Ontario, California - Heavyweight sensation Efe Ajagba (12-0, 10 KOs) and Georgia's Iago Kiladze (26-5-1, 18 KOs) slugging it out and trading knockdowns before Ajagba dropped Kiladze in the fifth round, prompting the ring doctor to call a halt to the bout. The end came at 2:09 with Ajagba scoring a TKO victory to maintain his unbeaten record.

It was an action-packed slugfest from the opening bell as the two giant heavyweights traded heavy shots. Late in the second round, Ajagba dropped Kiladze with a straight right down the middle. Kiladze was dazed but made it to his feet and finished the round.

In the third round, Ajagba landed another heavy shot that buckled Kiladze's knees and sent him stumbling around the ring on rubbery legs. Kiladze never went down. Though he was hurt, he was still dangerous as he proved when he dropped Ajagba with a thunderous right hand. 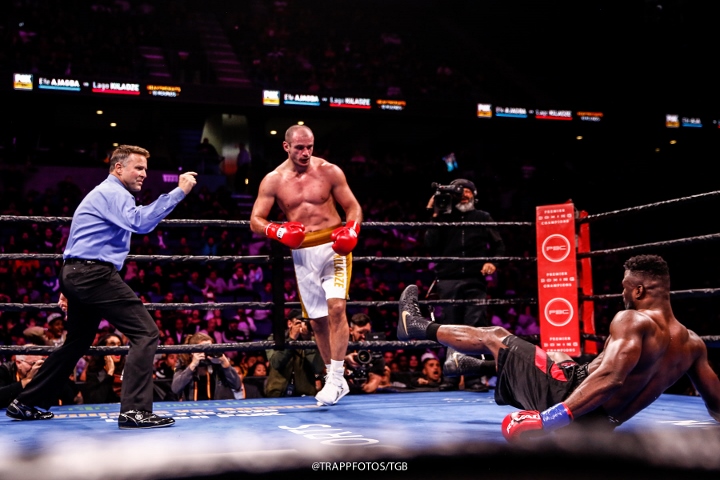 In the fifth round, Ajagba dropped Kiladze again, but he got up on unsteady legs. Ajagba was unloading unanswered shots on Kiladze when the ring doctor climbed on the apron waving a white towel, signaling that the fight was over.

"When I got knocked down, I didn't see the punch coming. I tried to hit him with the left hook and that's when I got caught,'' Ajagba said.

"He has a lot of experience and he's a good fighter. This kind of fight will help me perform better in the future. This guy was a good fighter and he can take a lot of shots. I missed a lot of shots. Ronnie Shields, my trainer, kept telling me to work behind the jab and come back with the hook. It's something that I have to learn to do. I made some mistakes, but I will go back to the gym and work on it. I'll do better next time."

Learning curve of a fight, you take away a lot from fights like that. But to be honest Efe was never a stellar amateur so am not getting carried away with him yet.

[QUOTE=Jab jab boom;20274205]you ever see Michael Grant Vs Golota?[/QUOTE] I did and I remember grant got up but this guy hits harder and is a better boxer. Grants problem was they stuck him in with Lewis and he wasn’t ready…

[QUOTE=Oshio;20275094]Whyte should not be mentioned in the same sentence with Ajagba. Whyte has a money-shot which could bring Wilder, Fury and Joshua down and, even, win the top 3 HW[/QUOTE] Well, had Ajagba hit Whyte in the same way Mariusz…

[QUOTE=kingstip9;20274369]Tell me exactly how he is supposed to work on his chin[/QUOTE] The only way a boxer can physically improve punch resistance is by building the neck muscles, it kinda works like a shock absorber. Pencil necked dudes are much…

[QUOTE=JakeTheBoxer;20274227]He has to work on his stamina and chin, otherwise top 20 puncher knocks his head off. Whyte and Chisora stop this boy easily at this moment.[/QUOTE] Whyte should not be mentioned in the same sentence with Ajagba. Whyte has…