The heavyweight knockout artist continuously hammered Wallisch with thudding shots in their brief bout. Referee Tony Weeks had seen enough after 4 ½ minutes and stopped their scheduled 10-rounder at 1:40 of the second round on the Robert Easter Jr.-Rances Barthelemy undercard.

Showtime televised the promising prospect’s most recent win as part of a tripleheader from The Chelsea inside The Cosmopolitan. 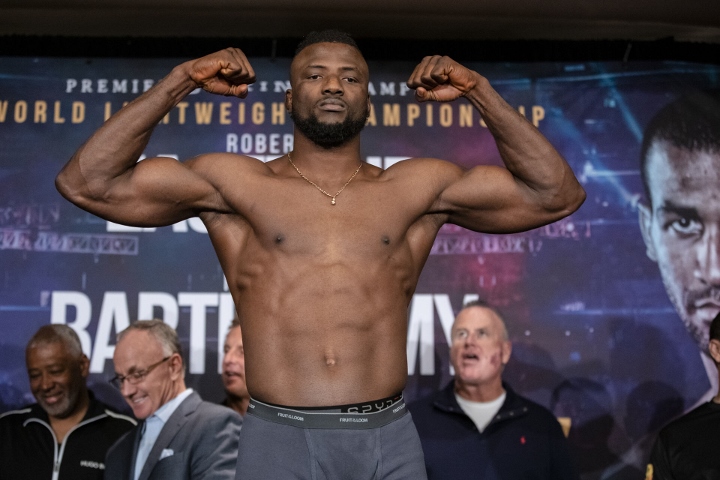 Ajagba, 25, has knocked out each of his pro opponents, except Curtis Harper. Eight months ago, Harper infamously fled the ring right after the opening bell for his fight against Ajagba sounded in Minneapolis.

Weeks gave Wallisch time to recuperate because Ajagba fouled him.

Once Wallisch was ready to fight again, Ajagba resumed his assault. He landed enough hard rights and lefts that Weeks stepped in to stop the action at 1:40 of the second round.

Wallisch was still on his feet when the bout was stopped, with his back against the ropes. He protested Weeks’ stoppage, despite that a TKO defeat seemed inevitable.

Wallisch went on the attack in the first round, when he tried to back up Ajagba with right hands. Wallisch had difficulty splitting Ajagba’s guard and hitting him clean.

Before long, Wallisch had taken some hard shots and had a nick above his left eye.

[QUOTE=Brettcappe;19699922]He looks like he is the real deal. Boxrec has him currently at 51. Would love to see him in with guys like Eric Molina or Szpilka who are top 30 right now. There is no need to rush him…

He looks like he is the real deal. Boxrec has him currently at 51. Would love to see him in with guys like Eric Molina or Szpilka who are top 30 right now. There is no need to rush him…

[QUOTE=JakeTheBoxer;19699225]Yeah he is better than Dubois, Hrgovic, Milas.. Maybe Yoka could be better than him.[/QUOTE] Yoka would leave the ring on a stretcher if he were to fight Ajagba.

[QUOTE=Oldskoolg;19698389]Loved the jab and the punch output. Only thing I would like to see is mo betta lateral movement. Can’t stand on front of everyone, he will have to learn angles[/QUOTE] Yeah, I agree. He'll have to learn mo betta…