Top Rank, promoter for Edgar Berlanga, are hoping that Lanell Bellows will not join the clan of fighters to be knocked out in the first round on October 17.

Since his debut in 2016, Berlanga has knocked out all 14 of his opponents in the first round.

But now the time has come to raise the level of competition in order to test the Puerto Rican boxer's ability to go rounds. 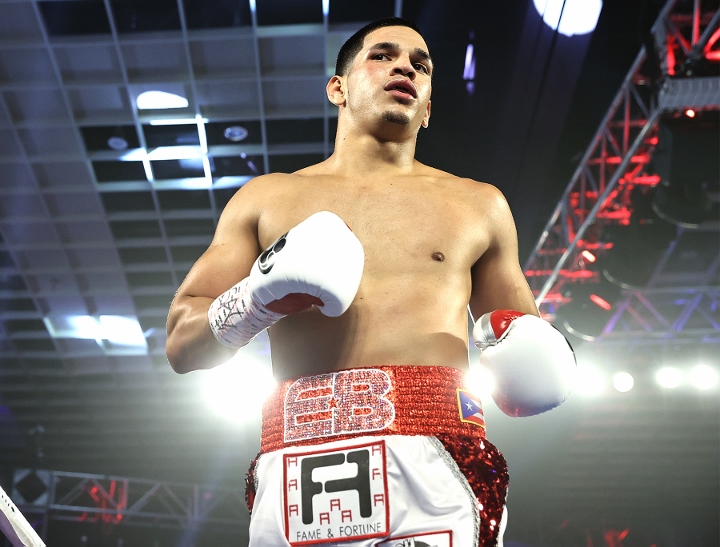 The bout will be part of the undercard to the highly anticipated clash between lightweights Vasiliy Lomachenko vs. Teofimo Lopez.

Bellows does have power, with record of 20-5-3 and 13 KOs. He won his last two outings by knockout.

"We want to see Berlanga get more rounds," said Carl Moretti, Top Rank vice president, to Carlos Narvaez. “We want more rounds on his record and we believe that Bellows is the perfect match to lead Berlanga to extend his fights a bit more.

"We were very happy with [his last] performance. But definitely when you have a fighter with such power that he finishes his fights early then there will always be that question mark of how he would look when there are more rounds. That is what we want to see now."

Berlanga blasted out Eric Moon on July 21 in Las Vegas, who he stopped him 62 seconds into the first round.

“We know that he is preparing to go the distance as well. But we want to see more,” Moretti added.

Bellows, 34, and 11 years older than Berlanga, has gone down in several fights and was stopped once, but the outcome was reversed to a no-contest. He's viewed as a step-up opponent in comparison to some of Berlanga's past foes.

[QUOTE=fourtheboys96;20786035]If they want rounds, then get someone who will give him rounds. Just look at those ranked 15 to 20 or 30.[/QUOTE] I mean they did get someone who can go rounds in Bellows. I don't believe he has been…

[QUOTE=fourtheboys96;20786035]If they want rounds, then get someone who will give him rounds. Just look at those ranked 15 to 20 or 30.[/QUOTE] He only has 14 rounds of experience i say keep stepping up slowly he needs the rounds he's…

If they want rounds, then get someone who will give him rounds. Just look at those ranked 15 to 20 or 30.