Eddie Hearn says it is “business as usual” in the wake of the coronavirus crisis but says there is no chance of Anthony Joshua’s fight with Kubrat Pulev, scheduled for June 20, or any other major show in the UK being staged behind closed doors.

“At the moment, everything is so up in the air short-term,” Hearn said. “I don’t think anybody knows what to do at the moment.

All Premier League and EFL football matches will be cancelled, as have Six Nations rugby matches, but Hearn believes that the Government will follow through with its threat the ban mass gatherings. “The government, at some point, have to come out and say ‘nothing over 5,000 or 1,000 or 500’,” Hearn said.

“We go on, business as usual, until we are told otherwise by the government. I spoke to the British Boxing Board of Control yesterday and they said the same thing. Their biggest problem is the doctors, having the right doctors ringside.

“My main concern is March 28 and April 4. But everything has a knock-on effect because you have ten fighters on that card saying 'when am I fighting?' and then the same the next week.

“There's risk for Dillian Whyte's fight (May 2), there's risk for this [Oleksandr Usyk vs Dereck Chisora] and there’s risk for AJ, too. But this is 11 weeks away, we just don't know.”

“For for us it's not catastrophic but it's more catastrophic for the fighters,” Hearn said. "They only get paid when they fight and we already don't have enough shows to put out all our fighters.

“I've got two kids in America, one this Saturday and one on the 28th for Golden Boy, they both got pulled last night in California. And that's another two that want a date.” 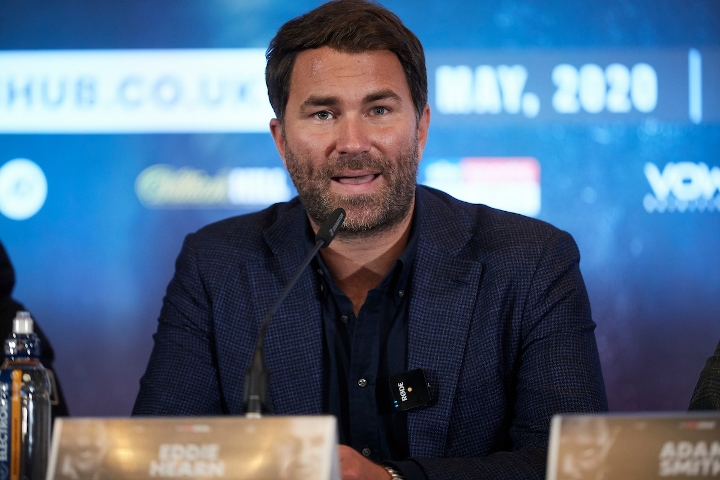 One solution might be to put shows on in small venues or behind closed doors, but that is not going to happen for bigger shows.

“Those fights would never be behind closed doors, we need the gate money and it's just too big,” Hearn said. “Imagine us sitting there and AJ knocks Pulev out and goes to us 'cheers lads'.

“Certain shows depend upon gate revenue, AJ isn't dependent on that but it's a big chunk. Usyk-Chisora we'll take £2million at the gate. Whyte-Povetkin we've sold nearly 11,000 tickets already but that's going to slow because people are going to wait now before buying.

“But I said to Adam Smith (the head of Sky Sports Boxing) the other day we might be better off hiring York Hall for the week and just air and knock out fights because we're going to get a log-jam of fighters.

“York Hall is the easiest venue for this because it holds 1,500, it's a boxing arena, everyone knows where it is.”

The most imminent US show under pressure is the April 17 card at MGM National Harbor that features Regis Prograis against Maurice Hooker and Luke Campbell v Javier Fortuna, while he promotes Bill Joe Saunders, who is due to face Saul ‘Canelo’ Alvarez on May 2.

“The phone hasn’t stopped but I haven’t got a clue, they’re all on at the moment,” Hearn said.

“In America the decision comes more from the athletic commissions rather than the government or the state.

“We will advise, if we don't go, that everyone who buys a ticket will get their full money back if there is a cancellation. If we turn around and say ‘no we're just going to give up’, then it’s back to normal, we're turning our backs to the situation.

“Broadcasters will have a big problem where fans are thinking 'what am I going to do this weekend? F--- there is no sport on telly!' There’s no Premier League, there’s no F1, there’s no golf. It is what it is. The difficulty for us from a business perspective is we’ve put something out about ticket sales and people reply saying ‘it ain’t even happening’.

“Bob Arum said to me yesterday we’re cancelling this weekend’s show but they’d sold about 500 tickets for Shakur Stevenson anyway.

“We may do it behind closed doors on April 17 because it only holds 3,000. We’ve sold 1,600 tickets at the moment. In America we’re dependant on TV money but in the UK we’re dependent on gate.”