Mid and late summer is usually free off any significant prize-fighting events – both in hotbeds of boxing and at their outskirts. Olympic summers are specifically scarcely populated with events of any note. Nevertheless, this summer, while not a bloomer wasn’t the total wasteland someone thought it could be, and Eastern Europe was not an exception.

In what was a very strange boxing affair, WBA #11 and WBO #13 rated super bantamweight Vladimir Tikhonov collided with highly decorated local veteran Mikhail Krivolapov over six rounds. This fight was strange for two particular reasons. Firstly, Krivolapov last fought in February 2005, losing on a TKO to then-rising Belgian Jackson Osei Bonsu. Secondly, Mikhail Krivolapov was a career… light welterweight. In this fight, 42-year old Krivolapov weighed at 135 lbs, while Tikhonov was eight pounds his lighter. The outcome was predictable. Tikhonov (15-0, 8 KOs) easily boxed slow and clumsy Krivolapov (40-5, 22 KOs) out, getting a wide UD: 60-54, 60-54, and 60-55. 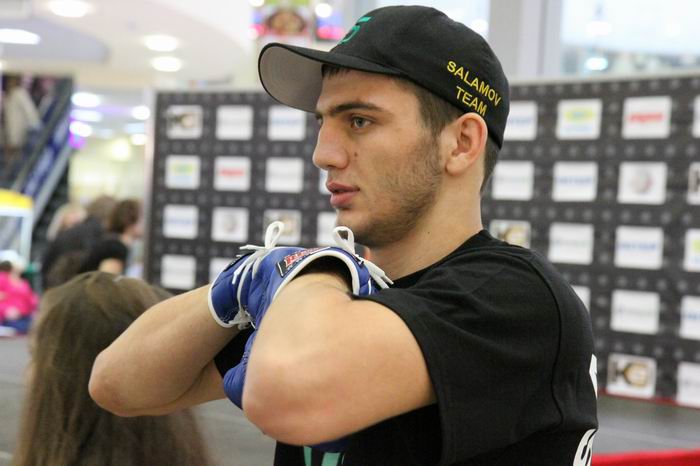 Unbeaten Ramzan Baysarov (7-0, 3 KOs) acquired a vacant WBC Eurasian Pacific light middleweight title with a hard-fought win over Russian former national champion Pavel Mamontov (11-3-2, 1 KOs). Scores were: 98-92, 98-93, and 96-94 – for the undefeated fighter, while Mamontov has lost his second fight over the course of two months, following his close loss to 20-0 Sergio Garcia in Spain.

Finally, in a heavyweight special attraction, 31-year old Evgueny Romanov (1-0, 1 KOs) debuted as a pro with a TKO win over Victor Chvarkov (1-1), when he knocked him out with a single left hook in round three. Romanov, Russia’s second or third choice for the national team during 00’s is best known for his kayo win over reigning WBC heavyweight champion Deontay Wilder in 2008.

Yuri Fedorov’s boxing tourneys in Latvia are usually highlighted with the presence of local boxing superstar Mairis Briedis. This time WBC #1 rated cruiserweight wasn’t presented but the show did get another Briedis, as his elder brother Kristaps debuted in the ring with the second-round TKO over someone named Toms Petersons.

In the main event, however, Russian light heavyweight Sergey Ekimov (17-0, 9 KOs) got a stoppage win, when his Spanish opponent Mustafa Chadlioui (8-2-1, 6 KOs) was forced to retire after eight with a foot injury.

Also, cruiserweight-turned-heavyweight Ruslan Fayfer (16-0, 11 KOs) got his seventh straight stoppage win (his fifth in 2016), knocking out vastly overmatched Zoltan Csala (9-8, 7 KOs) in two rounds. Csala was down once in the first and four times in the second round before a stoppage that came at 2:23 of the stanza.

WBA #3 and former interim middleweight champion Dmitry Chudinov (19-1-2, 12 KOs) continued his comeback story after a damaging loss to Chris Eubank Jr. with a unanimous decision over local fighter Andrejs Pokumeiko (9-12, 7 KOs). Pokumeiko was down in the first and lost the fight: 78-73, 79-73, and 79-71.

Veli Mamedov of the Duran Boxing Promotions staged a nice-packed show at Tesla Hall, which featured a number of rising fighters and a debut of a kickboxing star.

Russian welterweight champion Petros Ananyan (7-0-2, 4 KOs) got his most spectacular professional win, knocking out Filipino import Rey Labao (27-9, 18 KOs) in five rounds. Labao, who is known for his road wins over Japanese fighters, was stopped for the first time in his career.

Kickboxing (90-32-2, 46 KOs) and MMA (8-0, 6 KOs) former star Dzabar Askerov made his pro boxing debut with a one-sided unanimous decision over badly overmatched Nicaraguan Michael Mora (11-12, 4 KOs). Mora was down once in the third, fifth and sixth rounds. He has lost his tenth straight fight since relocating himself to Europe in July 2015. Scores were 60-51 (x3) – surely, for Askerov.

Two relatively-known fighters were featured in a local show by Shamir Petrosyan.

Light heavyweight Movsur Yusupov improved to 12-0, 5 KOs, with a wide unanimous decision over tough Artavazd Margaryan (2-9-2, 2 KOs). Scores were 80-71 – across the boards.

Salamov, 22, is the IBO light heavyweight champion but no regalia have been at stake in this particular fight, making it a non-title boxing affair. Next for Nemesapati is a highly dangerous (for the Hungarian) collision with 20-0 super middleweight top-ten contender Callum Smith in a week. Salamov’s next opponent is undefined.

Trying his best to get back to the title contention (or, at least, one step closer to the top-ten ranks) Ukrainian heavyweight Andriy Rudenko made a short work of well-travelled Brazilian Marcelo Luiz Nascimento (22-14, 19 KOs), knocking him out in three easy rounds. Rudenko (29-2, 19 KOs) is five fights removed from his bitter setback – two back-to-back losses to Lucas Browne and Hughie Fury in 2014 and 2015.

Young promoter Oksana Chernysheva staged a multi-fight (12 in total) tourney at the Tough Fight Club, featuring a number of young, promising guns. Two bouts stood out of the way.

Welterweight Ismail Iliev has never won a fight inside a distance. He has done just that against by far his toughest opponent on paper – former world title challenger and European super featherweight champion Sergey Gulyakevich (42-4, 17 KOs), who himself has never been stopped before. Belarussian Gulyakevich was just a fight removed from his one-sided loss to then-undefeated Ukrainian Ivan Redkach in June 2014. Iliev dropped Gulyakevich at the end of round one, mauled him all the way in round two, and forced him to retire in his corner after two complete rounds.