EA Brings Back Boxing Via "UFC 4," But Game Comes With A Twist - And Promise

Boxing’s video game library has been barren of a new title ever since Electronic Arts released Fight Night Champion in 2011.

The sport that once heralded Mike Tyson's Punch-Out!! has had many of its stars come and go over the last decade without their likeness able to compete in a virtual competition.

That changed ever so slightly Friday when UFC 4 debuted worldwide and featured heavyweight champions Tyson Fury and Anthony Joshua as playable characters, albeit in the discipline of mixed martial arts. (See below for Fury and Joshua’s full UFC stats, attributions and ratings.) 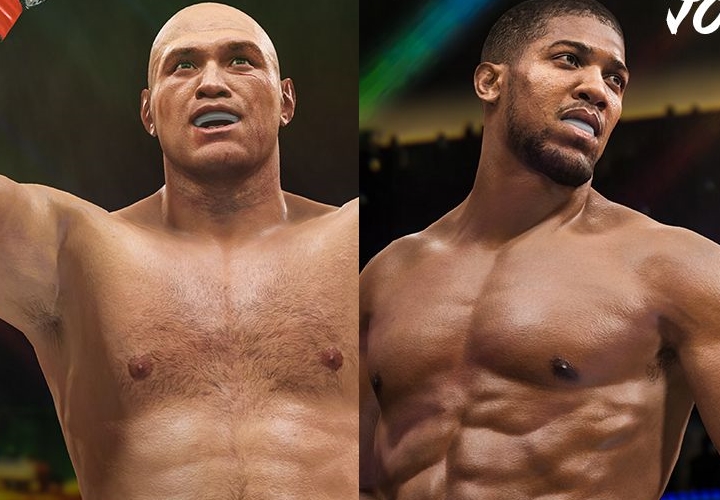 For boxing fans looking for a video game fix, it’s a fantastic alternative to fight with the British-based boxers in the octagon, even though UFC stars Israel Adesanya and Jorge Masvidal grace the cover.

Throughout the last nine years, many enthusiasts of boxing have pounded the table asking for a new game dedicated to the sweet science.

Brian Hayes, Electronic Arts’ creative director for UFC 4, was the gameplay and Champion Mode producer for Fight Night Champion years ago. Hayes and his team are now in charge of driving the UFC video game franchise for EA since 2014, releasing a new version of the title at a bi-annual rate.

If you ask Hayes, he still has a soft spot for the boxing title and is banging the drums to whoever will listen at EA trying to revive the franchise.

“Because I have a history with the franchise, and it's a game that I love, I’m always trying to make the case for the game’s resurgence as much and often as I can,” Hayes told BoxingScene.com in an interview.

“Fight Night didn’t really get canceled. When EA Sports signed a deal with the UFC, EA said, ‘hey, let’s have this fighting sports team start making this UFC game.’ We’ve just been busy making the UFC game, and it’s been challenging finding solutions for getting [Fight Night] spun up and done at the same time. I don’t think anyone at EA Sports ever said ‘cancel Fight Night.’ It’s really just never the right time. But as soon as I find out when the right time is, I’ll be yelling at people [to make the game].”

With bandwidth and priority being of the essence, the Canadian-based Hayes’ bread and butter, for the time being, is UFC, and he said playable characters like Fury and Joshua are a big hit with their gaming community.

“When we’ve brought in other fighters and personalities outside of the sport into the game, they’re very, very popular,” said Hayes. “Heavyweight boxing has definitely seen a resurgence in recent years, and it was just a great opportunity. People love to see big guys throw down. Both of them were interested in partnering with us, and it was fantastic … Their popularity outside of the UFC speaks to a broader audience. They certainly have significant fan bases. It is an opportunity to speak to their fans as well.”

By infusing the popular UK-based boxers, UFC and EA also tap into a completely different market and demographic, and with a stretch, boxing fans in general, hoping to make the game a commercial success.

“In our game, Fury and Joshua are great strikers, but they’re going to be in trouble when the fight goes to the ground,” said Hayes. “With my Fight Night lineage, I like guys who can throw their hands pretty well, but it’s not going to be a cakewalk for them versus UFC fighters.”

The addition of Fury and Joshua further perpetuates the idea of crossover fights, much like Floyd Mayweather Jr. pulled off versus Conor McGregor in 2017.

In recent years, Fury has sparred with middleweight contender Darren Till in MMA and even entertained fights with Francis Ngannou and heavyweight champion Stipe Miocic. Masvidal has even thrown his name into the ring of growing challengers wanting to face Canelo Alvarez.

Fury and Joshua’s debut is not the first time EA and UFC have dipped into the boxing well.

Hayes said special characters like Mike Tyson, Bruce Lee and Dana White have been popular players for the UFC game franchise in the past. Another feature that makes UFC 4 a fan favorite according to Hayes and critics alike is Created Fighter, especially in formats like Career Mode.

“Created Fighter is a very popular player to fight with in our game, and that’s for a variety of reasons,” said Hayes. “People like to make crazy characters. They want to create characters that look like themselves and fight with them. We saw this and wanted to make it more accessible and usable.”

Hayes said a Created Fighter is used more in the game than the top-two playable UFC fighters—Conor McGregor and Khabib Nurmagomedov—combined.

For this new installment, Hayes and his team have introduced a Universal Avatar, meaning, if a Created Fighter is a lightweight, they can enter the octagon as a heavyweight by shifting divisions with a click of a button.

Hayes is responsible for strategically aligning all involved parties together to execute the goals for the game. That includes fostering discussion with designers around gameplay telemetry from the previous version, reviews and player feedback to turn the ideas into solutions.

New features like Blitz Battles, Online World Championships, and environments like The Kumite and The Backyard are some of the highlights of the game. Improved Real Player Motion Tech overhauls are also evident from the previous iterations.

“Everything just evolves,” said Hayes. “[Fighting games] are not the same as every other EA Sports game that have city-based, seasonal sports. Those have a different kind of fandom. The similarities, both on the Fight Night series and UFC series, they have more of a significant casual fan base.”

If the opportunity presents itself, Hayes said it’s “possible” for them to continue introducing new boxers and stars into the game like Errol Spence Jr. and Terence Crawford.

“Anything is possible, but generally post-launch our focus is on the UFC roster and making sure it’s up to date and well-represented,” said Hayes. “There is always going to be a significant movement inside the sport, as new stars rise in the UFC. We want to make sure we strike the right balance between bringing in interesting personalities from other combat sports, as well as making sure we maintain an up-to-date, current roster. We need to definitely serve both avenues there.”

For the time being, there are no plans for a new Fight Night.

In recent months, Matchroom Boxing head Eddie Hearn has taken it upon himself to independently produce a game since EA has not entertained his inquiries, but not much has materialized other than headlines and social media fodder.

It appears EA doesn’t really need to reach a niche demographic with Fight Night in order to have a better bottom line.

EA had its strongest financial first quarter in its 38-year history this year with a revenue increase of nearly 21% year-over-year. The financial success (EA shares have risen nearly 31% since the beginning of 2020) however can largely be tied to stay-at-home orders across the globe.

The video game developer will look to continue winning the fight, only this time with UFC 4.

“We’re carrying on the lineage of Tyson and pitting mammoth heavyweights into the octagon to live out the fantasy of ‘what happens,’” said Hayes.

[QUOTE=YoungManRumble;20706644]That's a good idea actually but sadly licensed pros are half the reason people buy sports games like that ut seems. My fav baseball game currently is Super Mega Baseball 3 and even though it has all made up characters…

[QUOTE=PRchamp;20706537]I just don’t understand why don’t they just make a boxing game with made up fighters who are similar to the professional s fighting in real life. Download and upload content every month with new upcoming fighters. Have fighters with…

I loved FNC too and had all the previous versions. I still break out the PS3 just for that game and play it from time to time. I loved creating boxers and downloading others boxers. A lot of my created…

Everyone loved fight night, the truth is they stopped making it because ea cut a deal with ufc and they didn’t have money to invest in the fight night anymore. UFC game sucks ass, it’s too complicated and many times…

I just don’t understand why don’t they just make a boxing game with made up fighters who are similar to the professional s fighting in real life. Download and upload content every month with new upcoming fighters. Have fighters with…