Duva Hopes To Revisit Canelo-Kovalev Fight For Later This Year

Sergey Kovalev’s promoter finally found out that a Canelo Alvarez-Kovalev fight was a no go for September 14 the same way as everyone else.

It wasn’t until Golden Boy Promotions issued a press release Wednesday morning that Kathy Duva knew to completely shift her focus toward Kovalev’s mandatory title defense against Anthony Yarde on August 24. Duva had spoken to Golden Boy Promotions president Eric Gomez as recently as Friday regarding an Alvarez-Kovalev fight.

Golden Boy and DAZN increased its offer twice to Kovalev, who wanted more money to face the Mexican superstar. Golden Boy and DAZN didn’t offer the WBO light heavyweight champion as much as the eight-figure sum Daniel Jacobs was paid to battle Alvarez in a middleweight title unification match May 4. 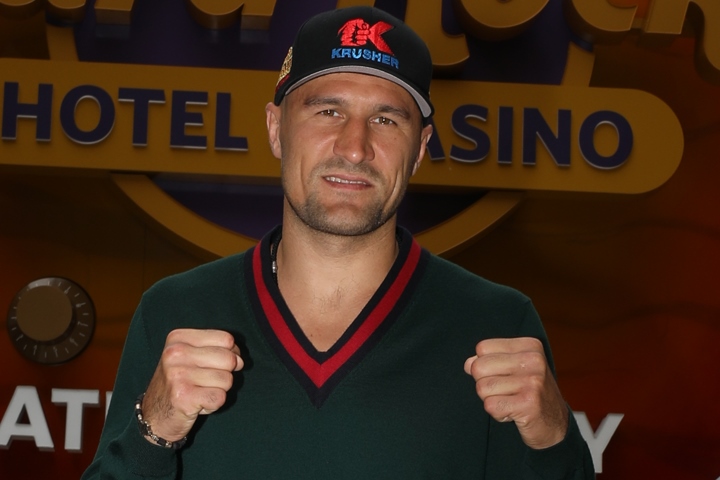 Eventually, Gomez, Oscar De La Hoya and Alvarez determined it was best to postpone Alvarez’s return to the ring until an unspecified date later this year. September 14 is just eight weeks from Saturday night, thus DAZN and Golden Boy essentially had run out of time to announce a fight, properly promote it and get Alvarez and his opponent back into training camp in a timely fashion.

Alvarez stated in the press release that he’ll fight “the best possible opponent” next. Duva hopes that opponent is Kovalev, one of two men DAZN executive chairman John Skipper has approved for Alvarez’s next fight.

“I’m told Canelo wants to fight Sergey,” Duva told BoxingScene.com. “We’ll see what happens. We have no control over this. [Golden Boy Promotions] clearly has to work out their issues with DAZN and Canelo, and I don’t know what they are. Sergey has been training and planning, full speed ahead, for the fight in August for a while. Even though I was getting an awful lot of calls [about an Alvarez-Kovalev fight], this was never anything realistic, that could’ve gotten done.”

The Kovalev-Yarde fight was officially announced Friday by the Russian Boxing Federation and Frank Warren, Yarde’s promoter. Yarde and Warren had agreed, however, to accept a step-aside fee in the event Duva and Golden Boy Promotions were able to come to an agreement for an Alvarez-Kovalev fight September 14 in Las Vegas.

Duva and Warren were forced to move forward with announcing Kovalev-Yarde because they only had six weeks to promote it. England’s Yarde (18-0, 17 KOs) will challenge Kovalev (33-3-1, 28 KOs) in the 36-year-old champion’s hometown of Chelyabinsk, Russia (ESPN+ in the United States; BT Sport in the United Kingdom).

“There was no way we were gonna gamble away his title,” Duva said. “This is a mandatory. It wasn’t like a fight where we could just say, ‘Hey, let’s put it off for a month.’ Sergey has to go on with his career.”

Kovalev-Yarde tentatively had been scheduled for June 29 in Chelyabinsk, but it never was officially announced. Duva and Warren came to an agreement for this August 24 fight a month ago, including the possibility of paying Yarde a step-aside fee that would’ve been determined only after an Alvarez-Kovalev deal was made.

If Kovalev defeats Yarde, Duva hopes not having to pay Yarde money out of Kovalev’s purse to fight Alvarez would make the next round of negotiations easier.

“That certainly removes a big complication from this,” Duva said. “It’s good for Sergey at that point, too, because he’ll be fresher. He likes to stay active. He hasn’t fought since February, so I think he would be better prepared for a fight [against Alvarez] a little later in the year. So, that part might be a plus in the end. But, of course, he’s gotta beat the guy in front of him. That’s really all he can think about and I can think about right now. He has to focus on the fight that’s in front of him. There are no easy fights at this level.”

I really want to like Canelo. He's technically quite good, he has a fun style and he brings a great passionate fanbase to the table. But man... there really is a lot of BS around this guys career isn't there?…

I hope Oscar tells Duva to go kick rocks. She let a golden opportunity slip through her fingers. Doesn't deserve another one.

You missed the boat Duva. Get lost slut

Good. I would rather watch Kov/Yarde. A clenelo fight could be crooked garbage with clenelo roiding and GB buying the judges and the ref. Clenelo is prob on the roids right now gaining weight for a move to 175. The…

[QUOTE=skinnystev;19907802]the sanctioning bodys will force alvarez to vacate for inactivity unless he fights in sept[/QUOTE] Inactivity? You do realise he fought in May dont you bra? He is under no obligation to fight Independence weekend, he just usually chooses to.…