Dulorme: Whether In L.A. Or Minnesota, Judges Can Turn In Bad Scorecards

Not having to fight Jamal James in his hometown seemingly would be one of the benefits of the site of Thomas Dulorme’s fight Saturday night shifting to Los Angeles.

Dulorme doesn’t look at their 12-round, 147-pound championship match quite that way, though. The native Puerto Rican actually was looking forward to meeting James at The Armory in Minneapolis, where their fight was supposed to take place April 11.

Once it became clear COVID-19 would prevent fans from attending the rescheduled card headlined by the James-Dulorme match, it was moved to Microsoft Theater, across from Staples Center in downtown Los Angeles. The site switch from James’ hometown doesn’t make Dulorme any more confident, however, about judges scoring their WBA interim title fight correctly.

“Whether the judges are in L.A. or Minnesota, they can still turn in bad scorecards,” Dulorme told BoxingScene.com through a translator. “There have been so many bad scorecards in boxing, it can happen anywhere. There could be bad scorecards in any city, in any state in the world.” 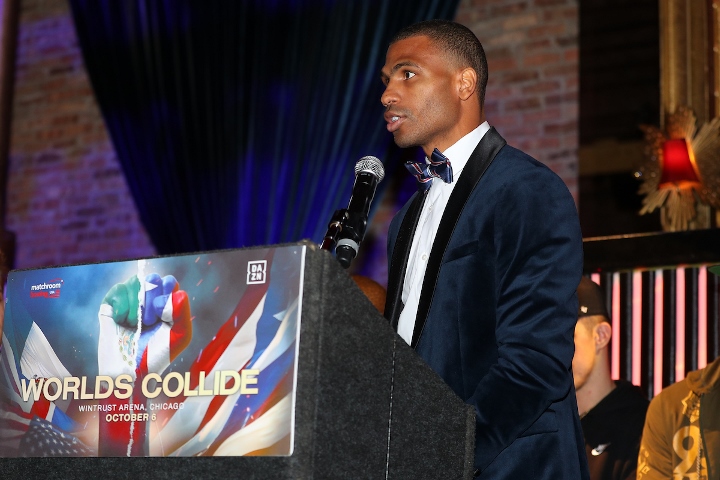 Dulorme doesn’t think he lost to Cuba’s Yordenis Ugas, who narrowly defeated Dulorme by unanimous decision in their 10-rounder on the Floyd Mayweather-Conor McGregor undercard in August 2017 at T-Mobile Arena in Las Vegas. The 30-year-old contender also feels he deserved better in his following fight than his 12-round majority draw with Las Vegas’ Jessie Vargas in October 2018 at Wintrust Arena in Chicago.

Though it is difficult sometimes to beat an opponent in his hometown, Dulorme (25-3-1, 16 KOs) wanted to fight James (26-1, 12 KOs) in front of his hometown fans in Minneapolis.

“I obviously like to fight in front of the fans and have the crowd noise,” Dulorme said of boxing in an essentially empty venue. “I also wouldn’t have minded fighting in his hometown because I like fighting in front of my opponent’s fans. I like to gain their respect from the job I do in the ring. I would’ve won over the fans with my performance.”

Each of James’ past four fights have been held at The Armory in Minneapolis. The WBA’s fifth-rated welterweight contender has won six straight bouts overall since Ugas defeated him by unanimous decision in a 10-rounder in August 2016 at Turning Stone Resort Casino in Verona, New York.

While Dulorme doesn’t consider the site switch much of an advantage for him, it did make traveling to the fight easier. He prepared at trainer Joel Diaz’s gym in Indio, California, which enabled him to drive approximately two hours to his hotel in downtown Los Angeles.

“The only benefit is that I didn’t have to get on a plane, where there’s a chance I could get infected [with COVID-19],” Dulorme said. “I would have had to fly to Minneapolis, but I was able to drive to L.A.”