Jessie Vargas (28-1-2) and Thomas Dulorme (24-3-1) battled to a draw in a spirited contest Saturday night in Chicago, IL. The bout served as the main event of DAZN's first boxing event staged in the United States. The final scores were 113-113 twice and 115-111 for Vargas.

The fight started out with Dulorme building an early lead before Vargas rallied back in the middle rounds.  Vargas floored Dulorme in the 10th round. He rose to his feet on unsteady legs but was able to fight back and finish the round.

In the closing seconds of the 12th and final round, Dulorme sent Vargas to the canvas and the extra point for the knockdown proved to be the difference in earning the draw on the judges' scorecards. 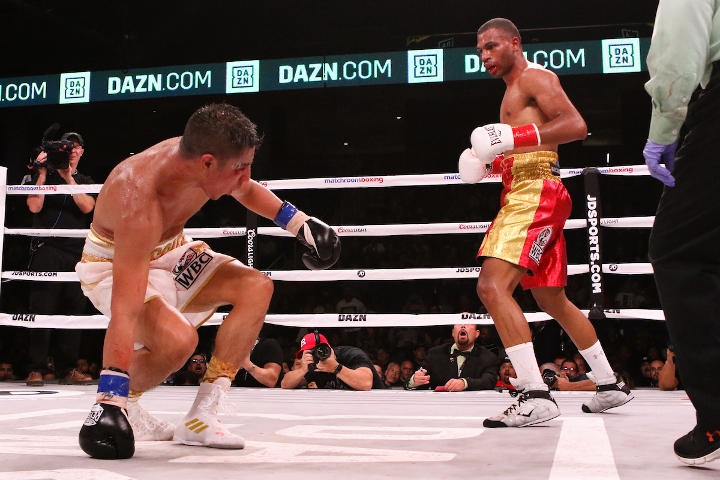 Dulorme wasn't happy with the draw result and believed that he had done more than enough to earn the victory.

"I think that the judges got it wrong," said Dulorme. " I think that was a very bad decision.  There is no way I lost."

The 28-year-old from Puerto Rico was planning on this being his bounce back fight.  In his last ring appearance, which took place 14 months ago, he lost a razor thin decision to welterweight contender Yordenis Ugas. That high profile fight took place on the Floyd Mayweather-Conor McGregor undercard at the T-Mobile Arena in Las Vegas.

Vargas was a 4-1 favorite for this fight so even with the draw Dulorme's stock will likely rise.  Regardless, he is still very upset with the decision.

"I think that I clearly won 8 rounds.  Without a doubt I won that fight. I think that most of the people in boxing agree with me," Dulorme told BoxingScene.com.

In the post-fight press conference, Vargas wouldn't commit to a rematch, saying that he would leave that up to his promoter Eddie Hearn and his advisers.

Vargas sucks for letting the fight be that close. He's a weird character.

I'll be the judge of that after I watch the fight on YouTube :)

I had it a draw man...Vargas let the win slip out of his hand the last 20 seconds of the fight with that flash KD