Dulay Furious With Loss: I Boxed The Hell Out Of Magdaleno

At the Bridgestone Arena in Nashville, a back-and-forth battle between lightweights Austin Dulay and Diego Magdaleno. Magdaleno produced one of the finest performances of his career, dropping Dulay on his way to a 10-round unanimous decision victory in a minor upset.

The 33-year-old Magdaleno (32-3, 13 KOs) was simply busier, particularly down the stretch in this battle of southpaws. 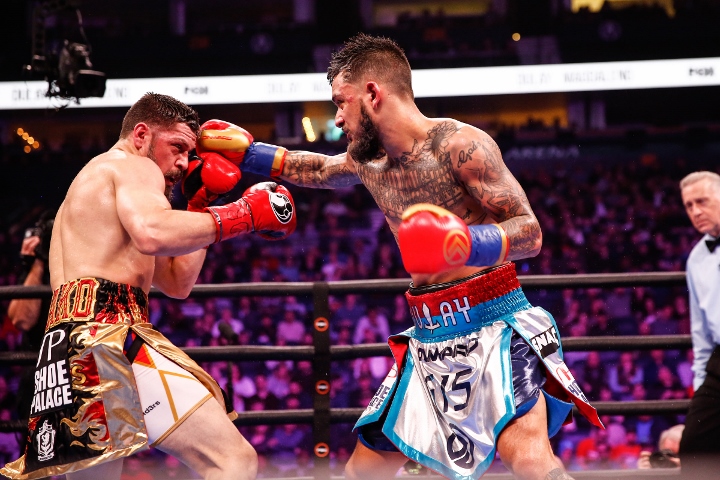 Dulay disagreed with the decision. "I boxed the hell out of him every round, making him miss, catching shots, countering. Yeah, he hit me with a few good body shots. That doesn't replace the heavy shots that I hit him with every single round for 10 rounds straight. That is madness. And it was a unanimous decision? That's crazy. That's unbelievable to me.

"Even Diego just told me that he had nothing to do with the decision. He knows. How can they do that to me in my hometown? That's dirty man."

Some of those shots strayed low which elicited warnings from referee Jack Reiss. However, the work paid off as Dulay's output dropped over the course of the bout. The sixth featured some of the best exchanges of the bout. Magdaleno got the better of those, landing a right to the ribs followed by one upstairs.

Magdaleno continued to press the attack in the seventh, scoring the fight's only knockdown with a hard left hook to the solar plexus.

Once action resumed, Magdaleno pounded at his ribs until a left hook strayed low and dropped Magdaleno, causing Reiss to deduct a point.

"Every round he was hitting me low and, in the back, and on the hips," said Dulay. "It was more times than he got called for. I won that fight 100%."

Sensing the fight slipping away, Dulay picked up the pace over the last three rounds. It wasn't enough to overcome Magdaleno's work rate, which earned him a win by scores of 97-91, 96-92 and 96-92.

"Experience has everything going for me. In my previous fight, I lost my head," said Magdaleno. "This time I took my time. My camp said slow it down. Happy for the victory tonight."

Nope. Not close. Dulay lost, I only gave him the first two rounds.

This is broner after yhe pac fight all over again...WHAT!?!?!?!? i sChOoLEd tHaT bOy.

Dulay thinks Leo messed up that bear in The Revenant.

[QUOTE=Mario040481;20396255]Bootleg Mayweather!? Nice, very, very nice. Outlet made in China Mayweather[/QUOTE] Lol...Dulays toy style might as well be made in a factory outlet in China. His style was all trinkets! Mayweather had the goods, Magdaleno’s style was tailor made for…