NASHVILLE—Not that Austin Dulay particularly enjoys a rainy day in Nashville, but there is far greater comfort in watching the inclement weather through his bedroom window than having to fly through it while arriving into town.

So goes the luxury of a rare home game for the lightweight, who meets Diego Magdaleno this Saturday at Bridgestone Arena in Nashville, Tennessee. The bout serves as the opening leg of a Premier Boxing Champions (PBC) on Fox telecast (8:00pm ET/7:00pm local time), topped by Ashland City’s Caleb Plant (19-0, 11KOs) in a super middleweight title defense versus Germany’s Vincent Feigenbutz (31-2, 28KOs).

For Plant, it’s a long overdue homecoming though one where he arrives back into town as the 27-year old now lives in the greater Las Vegas area. Like many others on the card, the defending champ flew into town earlier this week, combatting stormy weather to touch down and then fend off any experienced jet lag in order to prepare for fight week activities beginning with an open media workout at Music City Boxing gym. 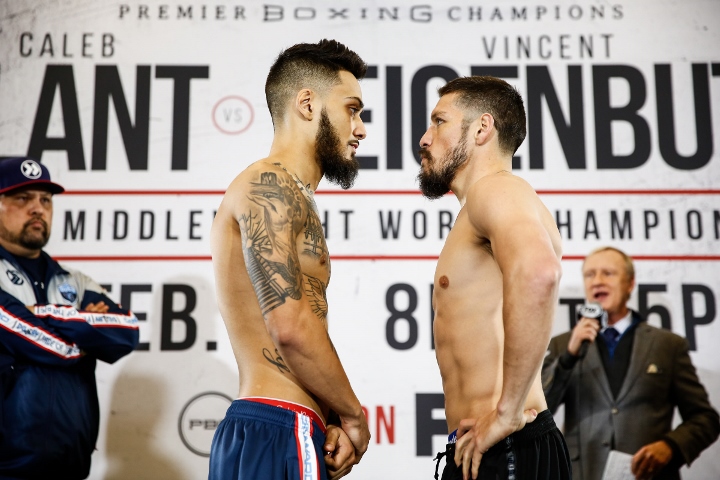 For Dulay, it was just another Wednesday in Nashville.

“Can’t relate,” Dulay (13-1, 10KOs; 1NC) joked to BoxingScene.com in comparison flight plans to his short drive to the office for the day. “I left my own bed comfortably this morning, got my coffee and hit the road.

Dulay—who was born and raised in nearby Hendersonville, roughly 20 miles northeast of downtown Nashville—can use the local edge against his most accomplished foe to date.

On the other side of the battle of lightweight southpaws is Magdaleno (31-3, 13KOs), a two-time title challenger from Las Vegas who is likely looking at his last chance to shine. The 33-year old southpaw suffered a heartbreaking loss to Roman Martinez in an April 2013 title bid, and a far more conclusive 2nd round stoppage to Terry Flanagan in their October 2015 lightweight title fight.

Magdaleno enters the ring this Saturday for the first time since a frightening 7th round knockout loss to Teofimo Lopez last February in Frisco, Texas. Lopez (15-0, 12KOs) went on to capture a lightweight title, which Dulay aspired to accomplish within the next 12-18 months and follow in the footsteps of Plant in becoming the area’s second-ever home-grown champ.

“That’s the idea down the road, the plan is to get another world champion here in Nashville and give PBC a reason to come back,” notes Dulay, who is advised by PBC creator Al Haymon. “Once we get that title, we ain’t ever letting go of it.

“But first I have to get through this step to take that next one. It’s just a blessing to know that I don’t have to go very far for this opportunity.”