Dubois: Fear Is an Asset, A Weapon - I Use It In Every Fight

Daniel Dubois says that he has used fear of failure as a drive to success so far as a professional.

The unbeaten heavyweight goes for win number 14 when he faces Kyotaro Fujimoto, of Japan, at the Copper Box, London, on December 21.

But despite a growing list of knockout wins, Dubois said that fear has been driving him to success.

“For my whole career fear has been an asset for me, it’s a weapon and I use it in every fight,” Dubois said.

“My own anxiety and in general, I want to do myself proud and don’t want to let down the people behind me that I care about. It’s pressure. I need pressure to survive and strive in this industry.” 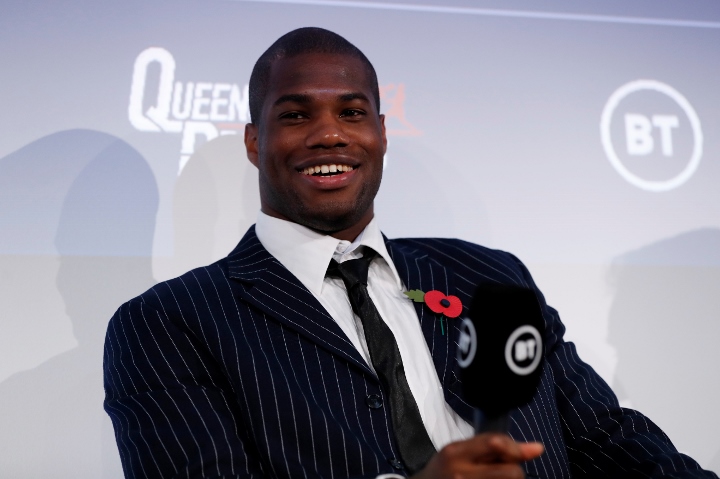 Dubois is ranked No 9 by the WBO and No 15 by the WBC and IBF, but Frank Warren, Dubois’s promoter, said the attraction of Fujimoto as an opponent was his No 12 ranking with the WBA. The bout will also be for the WBC silver title.

“For Daniel it is about fighting another guy with a belt, has a good ranking and a good record,” Warren said. “It will give him a lot of exposure. He is not ranked by the WBA at the moment. We are working hard to make him a No 1 contender next year.

“He has been punch perfect as a pro. He has really worked hard. He has gone from strength to strength at this stage of his career he is the best young heavyweight I have seen in British boxing. He has to go on still. He has ticked a lot of boxes.

“The plan is for him to be mandatory to one of the world titles this time next year, so he can challenge for the title without having to give away options. He will be up in the top 3 with the next two fights, guaranteed.

“I could make a world title fight for him tomorrow and I think he will win it, anyone he clips will go. But he needs a bit more experience. It is about winning the title and defending it over and over again.”

Dubois, the British heavyweight champion, says he has enjoyed becoming a more of a recognised figure as his wins have piled up.

“I love it,” he said. “The recognition is what I have been working for in the gym since I was 5 years old.

“The boxing audience in general is starting to take notice of me. It’s an on-going process, I am more than ready for the next step.

“My Dad still bosses me around the house, I do what I’m good at and try to be a humble guy.”

Keeping out of the gym has proved a problem, though. He had promised himself a holiday to the Caribbean after his first-round win over Ebenezer Tetteh in September, but did not get round to it. However, he is going in a short break to Los Angeles in the coming weeks, to accompany his sister Caroline, who hopes to box at the Olympics next year, as she is filmed a commercial for Adidas, before returning to begin his camp.

“Each camp I have been in I’ve improved so one day, when I am in position to fight for a world title, I’m going to be more than ready,” Dubois said. “I’ll just continue winning in style and I will get there.”

[QUOTE=gully7;20187840]I only added Allen because it'll attract casuals and get DDD a bigger fanbase, no doubt DDD ends the fight when he wants. The biggest trouble they'll find is fringe world level guys will want a fortune to fight him,…

[QUOTE=Adamsc151;20187216]Maybe Hunter is a step too far in terms of ability, I'd be looking to see if Dubois can handle a skillful come forward counter-puncher; he's shown he can beat opponents who get on their bike and ones who keep…

[QUOTE=Roberto Vasquez;20185205]I like Dubois and he looks promising but he literally hasn't done anything in the pros. He beat another unproven prospect in Gorman. And as far as I can see that's it Warren needs to step him up so…

[QUOTE=gully7;20187106]Hunter???? That's crazy, Hunter is world level and has the movement to outbox DDD. He wont be ready for Hunter for a good 12 months, its not worth the risk. I'd step him up to genuine world level when he's…

[QUOTE=Adamsc151;20186952]With Dubois, I think he's already past the stage of needing journeymen, even fringe contenders. The next step is fighting genuine top 15 contenders, not just someone with an over-inflated ranking due to a regional belt. I'd like to see…