The autumn gets a bad rap in some quarters.  Some compare it to Wednesday, the so-called “hump day” of the working week, the day we need to simply plough through in order to close the week down and get to the weekend intact.

The final months of the year are often reflective, a turning away from the summer towards mornings and evenings of darkness that require a switch in mind-set and routine.  This year has been especially night and day due to the summer heatwave that most of us probably complained about while sweating our way through it.

In many ways it is the home straight for another year, one for the home birds who see the ever encroaching early darkness as a sign that it is time to curl up in the warmth of our homes with a good book, a tablet (the electronic rather than the pharmaceutical kind) or some other device, and enjoy our loved ones.  For others it may be the opposite, a farewell to warmer days and the end of summertime pursuits.

September seems to cop for the worst of it.  “The harvest month” that was named after the Roman word for seven, “septem”, was traditionally a time to gather together the barley crops in order to prepare for the winter.  For boxing fans, it is a time when the sport starts getting back into gear and lays the groundwork for the months, and year, to follow. 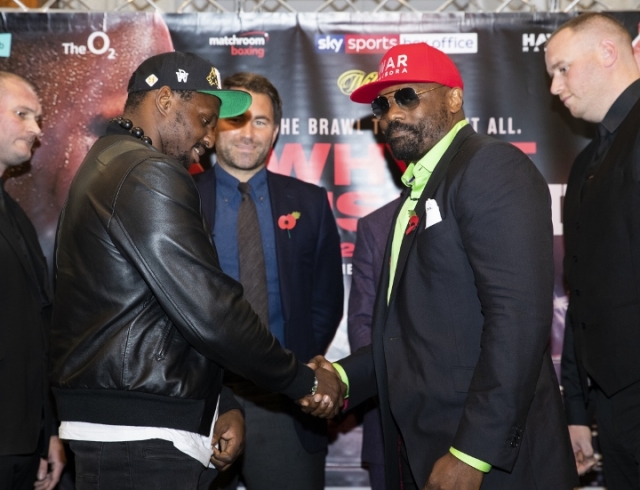 The end of the traditional summer break marks a steady cranking up of the boxing machine, usually culminating in a packed November and December schedule before things quieten down in January then pick up again as we head into spring.  The pattern of a boxing fan’s life is not dissimilar to that of a heavyweight slugfest: moments of boredom or pauses for breath punctuated by bursts of violence.

This year is shaping up along similar lines, even surpassing previous ones, as we will get Wilder-Fury, Warrington-Frampton, and Whyte-Chisora II in December. The lead up to the festive period has traditionally been decent: we’ve had Mayweather-Hatton, De La Hoya-Pacquiao, and Pacquiao-Marquez IV in the past, and often with supporting shows to take in before we head Stateside.  So December 2018 is likely to be a good one for the watchers.

That is why it is a shame that this particular festive period is shaping up to be the most expensive one on record for British boxing fans, who have long said they are being priced out of the sport and can justifiably point to three PPVs during a month in which our money is funnelled elsewhere or when our monthly pay date might nestle sometime after the 25th if you get paid on the last working day of the month.

Granted, we could easily be told that we have been given what we have always asked for.  There are decent fights in December this year and lots of choice.  In many ways this should be our winter of content, both in regards of how happy we should be with the schedule and the amount of boxing that will be available to us via the various TV networks and platforms.  This, though, is part of the problem.

For those of us who must simply take it all in December’s Christmas Boxing list looks like this:

Warrington-Frampton prices are yet to be set but we can expect £19.95

Whyte-Chisora is also expected to clock in at £19.95

That is for the PPVs, unless of course common sense or Christmas cheer prevails and one or both include a festive discount.  In addition, Sky Sports subscriptions can range from £28 to £61 a month (for UDH with Multiscreen as other people in the house might want to watch something other than the boxing) as you may have to bundle them in with other packs in order to get regular Sky Sports boxing content such as Kell Brook’s run out against Michael Zerafa.

Although there are deals to be had chasing them can take time, effort, and multiple calls so many may just opt for the full cost package for ease of use.  Sky users paying full whack could be looking at up to £120 for their December fix.

BT Sports costs anywhere from £25.99 a month (Standard Definition) with HD, and let’s face it most of us prefer that option, clocking in at £32.49 for a worst-case scenario cost of £93.49 during a crucial month if we were to opt for the higher-end of the costings.  Oh, and throw in £12 a month for those who subscribe to BoxNation.

Even Team Stream have to pay a price, with the cost of broadband thrown in for people who go for this option plus the antecedent cost of it for those who want to get the most out of their Sky or BT packages.

Factor in tickets for either show, priced, with additional fees, between £50-600 and £47.25-£328.79 (according to one of the many outlets for purchasing tickets) for Warrington-Frampton and Whyte-Chisora II respectively, and it becomes clear that this avalanche of content can cause a fair amount of discontent.  Even the fights we are given for “free”, such as Fielding-Alvarez, come as part of Sky’s hefty fee(s).

The promoters have come in for a lot of stick over the scheduling clash on the 22nd, with Warren arguing that it is down to Hearn’s ego and telling The Metro that: “What we’re not about is putting second tier, inconsequential fights on PPV for the sake of it.  It is disrespectful to Josh and Carl and, to a certain extent, Whyte and Chisora, who are being used.  While Whyte-Chisora is a decent fight, Sky customers need to ask what they are getting for their subscriptions if this event is deemed to be PPV.”

Hearn was typically bullish, telling Matt Christie of Boxing News that: “It’s two completely different contests and two completely different markets.  Warrington-Frampton is a hardcore fans’ fight, it’s not a fight for the casuals, it’s never going to attract casuals, even if it’s not on the same night as us...I know the numbers, it’s [Warrington-Frampton] not a threat.  What we’re going to lose on pay-per-view we’ll make up on the night.”

If both men could agree on one thing it is that wins for any of Warrington, Frampton, Whyte or Chisora will lead to further PPV nights in 2019.  A win for Whyte means that he is almost certain to face Anthony Joshua at Wembley in April unless Usyk steps in, and with the Ukrainian only one fight into a deal with Hearn’s Matchroom it is likely that he will squeeze in at least one more fight before vying for a shot at the partially unified heavyweight holder.

So after a mini-break in early-2019 the steady drip of money paid out will resume as the consensus heavyweight king partakes in the second of his Wembley “rewarding the fans” fights.  Although as things stand a fitting, and unlikely reward, for fans would be a non-PPV outing to help them recoup some of the costs from this packed winter schedule.

In the meantime, contentment with content comes at a cost, and a high one at a time when prices are rising, wages stagnating, and financial disaffection is rife.  Too many people are as skint as hell and can't take it anymore.  Fans may have to have an either/or moment and the best we can hope for in terms of the sport in general is that Whyte-Chisora does a great live gate yet the trade fight between Warrington-Frampton excels on PPV.   Reality is likely to set in, though, and the Whyte fight might eclipse and parasitically diminish what could be the domestic fight of the year, making it difficult to make these fights in the future.

This is all set against a backdrop of slight angst on the part of the fans, especially those who are naturally inclined towards pessimism, i.e. most of us, as we still half-expect at least one of the scheduled fights to fall by the wayside.

Although this may sound like an extended moan it is more a sigh of resignation, a whisper on the behalf of the financially oppressed.  You pay your money and make your choice or have no choice but to pay out two lots of monies to make sure you don’t miss out.  Either way, boxing continues to give with one hand and then take away with both.

In short: boxing is shaping up for a great December yet it is not going to be handed to us in gift wrap with a big red bow on top.  The clash of PPVs is tenable at the moment, it must be or simple economics would do away with these log jams, but, again, you have to ask what level of sacrifice some may have to make in order to continue to follow a business that, in many cases, is leaving them behind.