Two-division world champion Donnie 'Ahas' Nietes buoyed by a crowd of Filipino fans looked ripped and ready at the flyweight limit of 112 pounds lbs while former world champion Edgar Sosa of Mexico came in at 111.5 lbs during the official weigh-in at the Eagle Rock Plaza Mall (early Saturday in Manila) as the 'Philippines vs Mexico' boxing event unfolds at the StubHub Center on Saturday.

Then ALA Promotions fight card will be telecast on pay per view over the giant broadcast network ABS-CBN Sky Sports with a delayed telecast Sunday morning on the pre-eminent Channel 2.fight

Nietes who has a record of 38-1-4 with 22 knockouts who is fighting for the first time as a flyweight and Sosa 52-9-0 with 30 knockouts will contest the WBO international flyweight title over 12 rounds. 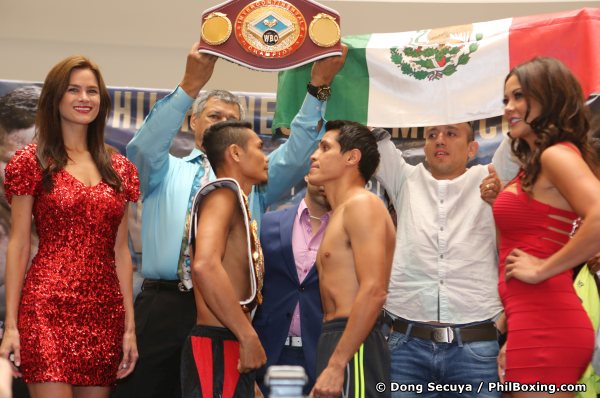 In the main undercard bout, promising unbeaten Mark 'Magnifico' Magsayo who has a record of 14-0- with 11 knockouts tipped the scales at 125.5 lbs while late substitute Ramiro Robles (13-5-1, 8KOs) of Mexico weighed in at 123.5 lbs. Magsayo will defend his WBO international featherweight title against Robles scheduled for 12 rounds.

Robles is a replacement for the injured Ruben Garcia.

In a rematch for the WBO Asia Pacific bantamweight championship 'King' Arthur Villanueva who has an impressive record of 29-1-with  15 knockouts weighed in at 117.5 lbs while Juan 'Pineta' Jimenez 22-10-0, was overweight on the first try, coming in at 119.5 lbs., 1.5 lbs above the 118 lbs bantamweight limit.

Given two hours to shed the excess weight Jimenez was still overweight at 119 lbs when he returned to the scales about an hour later. Upon the advice of the physician who examined Jimenez, he was not allowed to shed more weight.

Based on the rules, Jimenez will wear  heavier 10 oz gloves on fight night and if he beats Villanueva, the belt will be declared vacant.

The weigh-in for the WBO sanctioned fights was supervised by WBO’s Richard DeCuir.