Carson, Calif. - Donnie Nietes made his debut at the flyweight division on Saturday night a successful one.

The longtime world titleholder at minimumweight and junior flyweight defeated Edgar Sosa by unanimous decision before a small, but partisan crowd at the Stubhub Center. 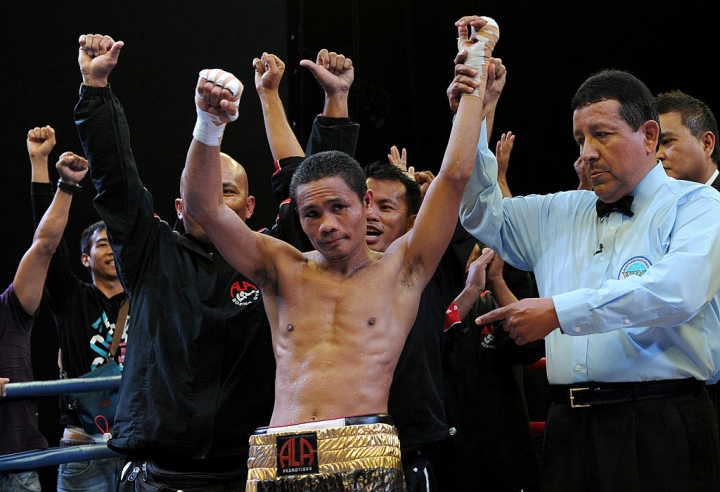 Sosa weighed three and a half pounds more than the contracted weight at Friday's weigh-in. He defeated Orlando Guerrero in his last bout on February 13.

Prior to that bout, Sosa was stopped in the second round by Roman 'Chocolatito' Gonzalez back in May of last year.

After a slow start from both fighters in the opening round, Nietes let his hands go more in the second, momentarily staggering Sosa with a right hand to the head near the end of the round.

Nietes again almost put Sosa down near the end of the fourth round, landing another right to the head. To his credit, Sosa was able to hold on until the bell sounded to end the round.

Both fighters had their moments in the middle rounds. Sosa was at his best when he initiated the exchanges, but he was not able to keep up with Nietes' punch output.

There was a discrepancy in round nine when the timekeeper at ringside sounded the bell to end the round at the two-minute mark, one minute short of the regulation three-minute rounds.

Nietes hurt Sosa again near the end of the 10th round as a right cross staggered Sosa across the ring. Sosa was able to hold onto Nietes and make it out of the round.

Nietes pressed the action in the final round, stunning Sosa again with more than a minute left in the round. But Sosa was able to use his ring savvy to make it to the final bell.

All three judges scored the bout 120-108 in favor of Nietes.

[QUOTE=ShoulderRoll;17072392]Chocolatito got rid of Sosa in 2.[/QUOTE] Nietes won 12 rounds EASILY. And he is a bóxer, not a pressure fighter.

Nietes is a solid fighter but this would have been more meaningful if he'd beaten Sosa when he was a light flyweight or when he wasn't 37 and without a meaningful win in at least three years. Now that Gonzalez…

I live 5 min from the StubHub center, I go to most fights there; I absolutely skipped this card. Nietes is the next Chris john, he's good but no one cares. How many people actually remember that he "beat" Marquez???.…

[QUOTE=BIGPOPPAPUMP;17072410]Not a good look for Nietes.[/QUOTE] Power isn't everything, haven't we known this already? Roman probably wished that wasn't all he had in his last fight so his face didn't look like old, melted chocolate that got stepped on. Nietes…