CEBU, Philippines - In one of the most intriguing and competitive boxing battles between Asian star fighters, three-division world champion Donnie Nietes (41-1-5, 23 KO's) of the Philippines clashes against Japanese standout Kazuto Ioka (23-1, 13 KO's) for the vacant WBO Super Flyweight World Title on New Year's Eve at the plush Wynn Palace Cotai in the vibrant city known as "The Vegas of Asia," Macao; and Nietes' strength and conditioning coach American Nick Curson, feels more than confident on the chances of his fighter.

BoxingScene.com caught up with Curson in Cebu, Philippines, where he trains Nietes for his important world title fight against Ioka. 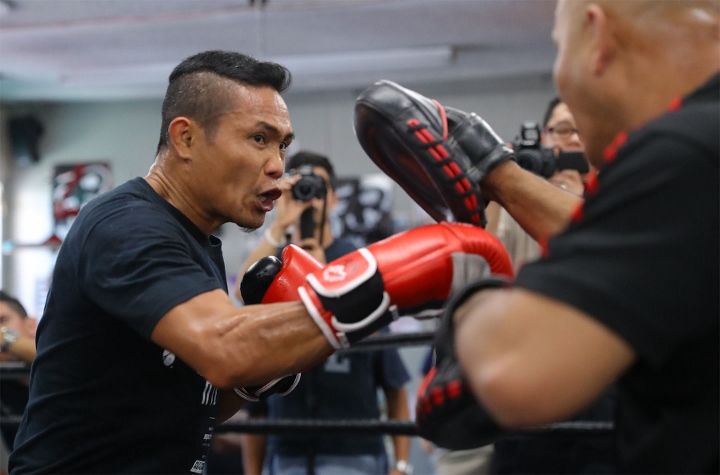 How has been for you working with Donnie Nietes?  Specifically, how is his conditioning about two weeks before the Kazuto Ioka fight?

"Donnie Nietes and me, we have a very good chemistry.   I think that he understands me and I understand him very well.

"The first fight I work with Donnie Nietes was when he knocked out Mexican Moises Fuentes to defend his world title at 108.   That was back in May of 2014.   And I have worked with him ever since for a total of nine fights.

"The success in his good conditioning in all fights has been a team effort 100%.   I appreciate Donnie as a person and as a fighter and I enjoy working with him and with his head coach Edito Villamor and the whole ALA team.   We have such a great chemistry and we respect each other boundaries.

"Donnie began at 105 and now he fights as a super fly.   We had to prepare him to go to the higher weigh division.  We paid attention to changes in the physiology of the body, enhancing certain areas of his body where we could add more muscle without impeding his performance, without impeding his speed and his creativity (in the ring).

"We have done a total of nearly four months training.  We did a lot of building in that time because we had so much boxing preparation, so we worked on cardio .   In addition, very importantly, we implemented a new diet, a very strict diet that would help Nietes in the weight cut process and the weight management process.

"I gave Nietes new supplements from fresh foods in the market that are really helping out, plus better hydration procedure after the weight cut to ensure that he will have energy.

"We all should have a diet strategy.   We could perform even better if we put some science behind dieting and weight-cutting.

"Donnie himself would tell you that after twelve rounds, he'd feel as good as if he was in the sixth or seventh round as in his last fight (against Palicte), which I believe he won; and his power was even better as the fight went on so he could relax and feel comfortable and just do his boxing job.

"Because we have to admit that we have moved up to 115 and during the first rounds you feel a little bit cautious about what is going on, wondering if you could take the power of your opponent and stuff.    But once realizing that you could easily handle the opponent's power, together with speed and air, then Donnie could let his hands go and it all could be done really good.

The Palicte fight was last September, and Nietes looked with stamina and conditions.   From there to training Kazuto Ioka in December, how was it?

"We had such a great starting point from where we left off that it is not taking that much to get Donnie back in great shape for this fight (against Ioka).   Plus, Donnie is disciplined.

"But I'd still like to continue pushing the envelop, and really see how far we can take this 36 year-old boxer (Nietes), with the body of a 24 year-old.

What about Kazuto Ioka?

"Not easy.   A three-division world champion.   29 year-old.   Skilled.   He is a challenge, a real challenge that we have to overcome.  That is why we are not overlooking Ioka at all.

"Kazuto Ioka is a Japanese fighter.  He has the heart of a Samurai, the warrior who never quits.

"Plus, he is a very intelligent boxer," said Nick Curson, the strength & conditioning coach from California preparing Nietes here in Cebu, Philippines.

"Yes, Ioka has the heart of a Samurai, and that is true.

"I have trained 15 world champions in various sports, and to me, Japan athletes consistently rank among the top 3 in mental toughness.   In mental toughness and heart, I would rank Japan among top three.  Also in the short list I'd include Persian Middle Eastern athletes as athletes with tough mindset for competition.

"Fighters who have a mental toughness and heart become the # 1.    If they have heart...  The ones who do not have it, just collect a paycheck."

The author Carlos Costa is a Panama-born Boxingscene.com fight reporter based in Cebu, Philippines.  He will attend the Nietes vs Ioka battle in Macao.  Carlos can be reached by email:  [email protected] and Whatsapp"  +639184538152.

Ahas' venomous bite puts the samurai boxer in a slumber, I predict.

Nietes via 1st round KO!

Both Ioka and Nietes has only one loss. And both of their losses on their record were controversial. Whoever wins between the two, the winner will be a 4-division world champ and will be holding the WBO superflyweight belt. Alot…

I'm excited for this bout, may the better man win