Donaire is starting to fear, though, that their fight isn’t going to happen. When Donaire agreed to compete in the World Boxing Super Series’ bantamweight tournament, he was told that the final would take place by June or July of this year.

Now that we’re nearing the end of July, Donaire has grown frustrated that the tournament’s organizers haven’t even scheduled their 12-round final for his WBA “super” world bantamweight championship and Inoue’s IBF 118-pound crown.

Donaire voiced his growing concerns to a group of reporters Thursday at the media center for the Manny Pacquiao-Keith Thurman fight at MGM Grand.

“We want communication, because we do want to fight,” Donaire said. “We do want to make things happen. But if that doesn’t work, then we’re willing to move on and make it happen some other time.”

“My promoter has talked to them, and they said they’ll get back to him,” Donaire said. “But they haven’t. The last time that we heard from them was my wife’s birthday, June 21st. … So, that’s pretty much it. We haven’t heard anything. And again, I love the opportunity that they’ve given me, fighting the best out there, making me world champion all over again. And I wanna fight. That’s all it is, just communicate and know exactly when I’ll fight and I’ll be there.”

Based on that timeline, Donaire senses something isn’t quite right regarding the Inoue fight, as if it might not happen.

“That’s what I’m saying,” Donaire said. “That’s exactly what it is. But in the meantime, if I don’t hear anything, my promoter and I, we’re gonna move on.” 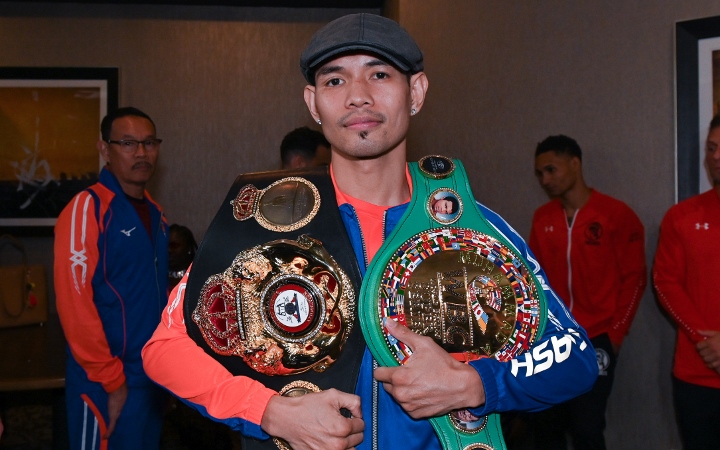 The 36-year-old Donaire defeated Stephon Young by sixth-round knockout in the WBSS semifinals April 27 in Lafayette, Louisiana. St. Louis’ Young (18-2-3, 7 KOs) was an 11th-hour replacement for WBO champion Zolani Tete (28-3, 21 KOs), who abruptly pulled out of the tournament due to a shoulder injury April 24 at the final press conference for his fight with Donaire (40-5, 26 KOs).

Japan’s Inoue (18-0, 16 KOs) knocked out Puerto Rico’s Emmanuel Rodriguez (19-1, 12 KOs) in the second round of his bantamweight semifinal May 18 at the SSE Hydro in Glasgow, Scotland.

A Japanese promoter announced Thursday during a press conference in Inoue’s hometown of Yokohama, Japan, that Ohashi Promotions wants to bring the Inoue-Donaire fight to his native country some time in November. Donaire would prefer fighting earlier than that, but he just wants to hear something at this point from those that run the World Boxing Super Series.

“That’s why I’m here with my promoter, because we were discussing the whole situation,” Donaire said. “We don’t really know what’s going on. I love the tournament. I love the concept, but one way or another, this is how I live, this is how I do things. And I want to fight. You know, that’s all I want to do is fight. And the thing about what’s happening now, and what my promoter and I is looking at, is we don’t know anything.

Donaire, meanwhile, wants to test this revitalized version of himself against Inoue, a 26-year-old knockout artist nicknamed “Monster.” Whereas Donaire notices most opponents are afraid of Inoue, he wants to see how Inoue responds when he encounters a powerful puncher who’s willing to trade with him.

Donaire feels fresher after returning to the bantamweight division following his featherweight defeat to Carl Frampton (26-2, 15 KOs) almost 15 months ago in Belfast, Northern Ireland, Frampton’s hometown. Before winning both bouts in the WBSS’ bantamweight tournament, “The Filipino Flash” hadn’t competed at the 118-pound limit in seven years.

The five-division champion is certain that if their fight does happen, he’ll be the best opponent Inoue will have faced since he turned pro in October 2012. Donaire doesn’t think their resumes are comparable, either.

“It’s OK,” Donaire said of Inoue’s record. “I don’t think it’s a great resume. You know, he’s still young. He’s fought guys that – you look at my resume, I’ve fought guys that were world champions. I fought 11, 12 world champions in a row. You know, he hasn’t done that yet. And don’t get me wrong – everybody’s different, and they go in there differently. You know, it’s like somebody who fights in the gym, and they’re tremendous. But when they get into the fight, they don’t show up. You know, it’s like that. So, I don’t look at resume in that way. All I know is what I’m capable of and what he’s capable of, and it’s exciting.”