Donaire: Figuring Out How To Beat Naoya Inoue Gets Me Excited!

It’s been a busy weekend for Nonito Donaire, but he wouldn’t have it any other way—right down to having to face one the sport’s very best for his next ring adventure.

The four-division champ and reigning two-time bantamweight titlist spent back-to-back nights watching from ringside the latest victories by an opponent from his past and one in his immediate future. One fight after watching Ryan Burnett return to the win column with a win in Belfast, Northern Ireland, Donaire touched down in Glasgow, Scotland to witness the final leg of the World Boxing Super Series bantamweight tournament semifinals.

As it pertains to his future, the night ended with the latest step in the destructive path of Naoya Inoue (18-0, 16KOs), who scored a 2nd round knockout of Emmanuel Rodriguez. The feat earned the unbeaten wunderkind from Japan a major title in his third weight division, along with accolades of serving as perhaps pound for pound the very best boxer in the world today. 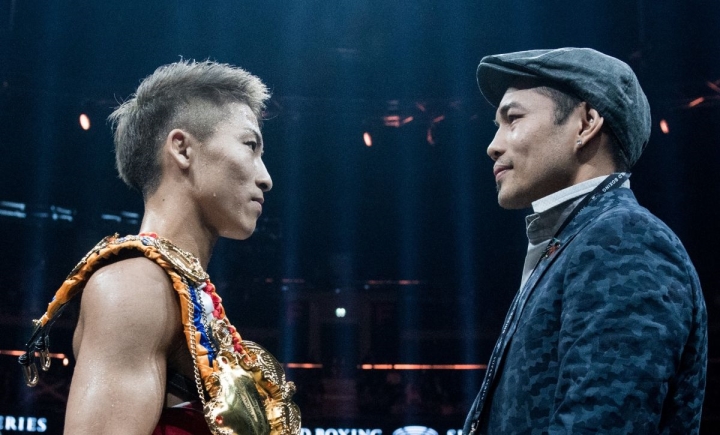 What it definitively provided Inoue was a spot in the WBSS finals, where awaiting him is an overjoyed fellow titlist.

“He came in here and did what he needed to do,” Donaire stated in joining Inoue in the ring shortly after Saturday’s bout, which streamed live on DAZN. “This is the moment we’ve been waiting for. We both felt it was our destiny and this is what boxing is all about—the best fighting the best.”

Donaire (40-5, 26KOs) has already led a Hall of Fame career, but his latest run in the WBSS tournament only adds to his incredible legacy. Granted, each of his last two wins come with disclaimers, beginning with his 4th round injury stoppage win over Burnett last November to become a two-tour bantamweight titlist.

The fight was competitive before Burnett was forced to the canvas late in round four after suffering a slipped disc in his lower back. The night would end with the previously unbeaten titlist having to be carried out of the ring on a stretcher, while Donaire extended his career by at least one more fight.

A bantamweight title unification clash was believed to be next for Donaire in the tournament semifinals, only for Zolani Tete to have to withdraw just days before their scheduled April 27 clash in Lafayette, La. after suffering a shoulder injury. Donaire was forced to settle for late replacement Stephon Young, whom he vanquished in a highlight reel 6th round knockout.

Still, the Fil-Am boxing icon entered the tournament with the intention of facing and beating the very best. From the outset, he envisioned a finals with Inoue—10 years younger than the 36-year old Donaire and in the optimal prime of his career—and it taking place in Japan or elsewhere in Asia.

In other words, it’s why he continues with what has already been an incredible career.

“He’s ‘The Monster,’” Donaire quipped, lending credence to Inoue’s ring moniker. “He has great power, great intelligence and figuring out how to beat him makes me feel like I’m 21 again—this is what excites me.”

I am just curious what is the size difference between Monster and Matrix?

This will be do or die!

Donaire v Inoue will be massive in Japan, remember the Nishioka fight. :moon:

This is gonna be a barn-burner. Nd is the underdog for sure. But' I think it will go the distance and it's gonna be close.

This is what I like about Donaire; he's a fighter at heart. He's genuinely excited about facing the very best in Inoue on a grand stage like the WBSS. If he wins it'll add another huge feather to his cap…