Imam, 27, rated No. 1 by the WBC, boasts a victory by knockout ratio of 86%, including his last three and five of his last seven.

Ramirez, 25, WBC No. 3 ranked super lightweight, has stopped 76% of the opponents he has faced, including four consecutive and eight in his last 10 bouts. 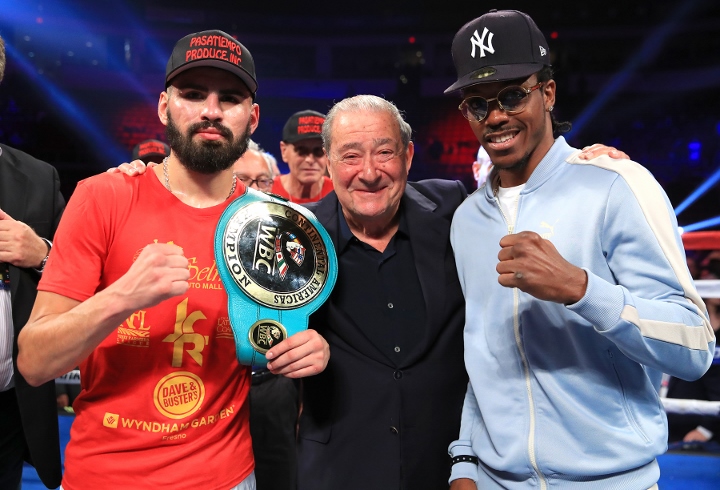 "Amir Imam is coming to Madison Square Garden, The Mecca of Boxing, in New York City, to take down not only Jose Ramirez but Bob Arum too!" boasted Imam's promoter Don King.  "I can hardly wait for Saturday night.  Start the clock.  Tick-tock, tick-tock."  T-minus 124 hours 45 minutes till Ramirez-Imam enter the ring, Saturday night . . .

"Yes sir, March 17 is a big day for me and the stakes are real high for both me and him.  It's the first time I get to fight in the Garden and that's exciting, knowing that greatness has fought there.  It's the first time I am fighting in a main event and first time fighting for a world title," said Imam.  "It's what I have been working for my whole life and it's finally here and I've got to take advantage of it.

"He's kind of tall and long just like me, so it's like seeing each other in the mirror so it is going to be real interesting and it's going to be an electrifying fight."

"Ramirez is a tough fighter - a real tough fighter and we know what we've got to do to win this fight.  If a knockout comes I will take advantage of it but I am not going in there looking for a straight knockout.  I have to fight real hard and get the rounds under my belt just in case.  He's been aggressive but he may not come out aggressive - you never know.  I just have to be smart in the ring and adjust to things he will be doing."

"I can definitely match his power, I can box when I have to, and I can fight.  I can do a lot of things. I can do whatever it takes to get the W.  A lot of fighters these days can't do that - they are one-dimensional fighters.  If I have to box or if I have to slug I can do it. I think I am the toughest guy in the 140-pund division.

"I can just hear them saying "The New."

Ramírez vs. Imam will headline a spectacular St. Patrick's Day boxing extravaganza, The Ramírez - Imam world championship fight will be televised live and exclusively at 8 p.m. EDT on ESPN and stream live on the ESPN App at 6 p.m. EDT.  It will mark the first time Arum and King have battled each other promotionally on the same card since Miguel Cotto defended his World Boxing Association (WBA) super welterweight world title on March 12, 2011.

Don King still slithers around the boxing business to this day ripping off everyone he comes into contact with. Shame on the great fighters that sign him into promotion?! After Tyson,Spinks,Ali and the list goes on &on he really should…

Somebody shut Don King up.. he talked soooo much trash for Wilder vs Stiverne 2. Lmao.. Damn near got that man killed

The King lives! Don is not as bad as people portray him. Boxing is a tough sport to make money. Nothing like baseball or football. Don does have a humanitarian side to him and has given generously to many causes…

Sorry Don but Ramirez will stop Imam. Imam is flashy and fast but Ramirez is a bad style for him.

[QUOTE=fragilety;18567978]This guy is not playing guys, having come up watching throuh the late 80's untill now and no one put cards together like Don King(though he probably had to rip off and massively underpay headlinimg worthy boxers to achieve this)..…