NEW YORK – Dominic Breazeale beat Eric Molina on Saturday night, but he didn’t do much to generate interest in a potential title shot against WBC heavyweight champion Deontay Wilder.

Breazeale knocked down Molina in the eighth round, after which Molina’s corner men stopped their scheduled 12-round WBC elimination match on the Wilder-Bermane Stiverne undercard at Brooklyn’s Barclays Center. 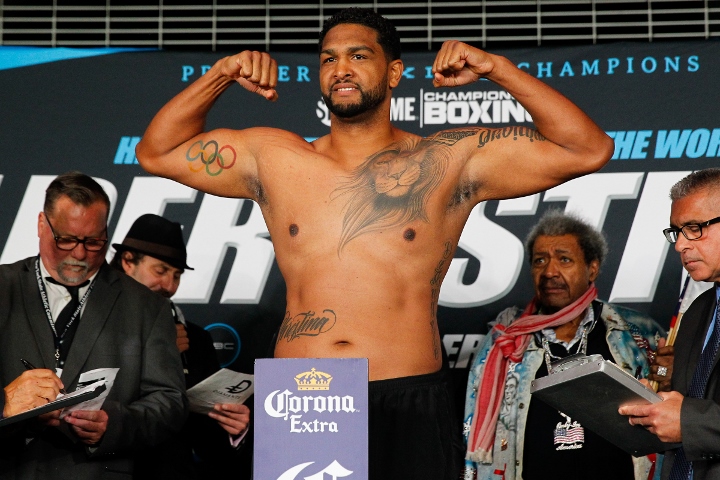 The win will elevate Breazeale in the WBC’s rankings, but WBC president Mauricio Sulaiman said the Breazeale-Molina match wasn’t a final eliminator. That means Breazeale isn’t the mandatory challenger for winner of the Wilder-Stiverne rematch later Saturday night.

Breazeale entered the fight ranked No. 6 by the WBC, six spots ahead of the 12th-ranked Molina.

Breazeale landed a right hand to the side of Molina’s head that caused Molina to take a knee near a neutral corner with about 1:50 to go in the eighth round. Molina made it to his feet, but seemed exhausted and couldn’t keep Breazeale off of him until the bell sounded to end the round.

Molina could barely stand up by the time the round ended and his trainers wouldn’t allow him to start the ninth round. Molina indicated in his corner after the fight that he was disoriented from getting hit on the back of his head.

Before the eighth-round knockdown, some of the best action in the relatively boring bout came just before the midway mark of the fifth round. That’s when Breazeale and Molina traded hard right hands in a neutral corner.

Breazeale was supposed to face Stiverne on Saturday night. Stiverne replaced Luis Ortiz as Wilder’s opponent in the main event, though, once Ortiz tested positive for two banned substances late in September.

Before Saturday night, Molina had boxed just once since British knockout artist Anthony Joshua (20-0, 20 KOs) stopped him in the third round of their title fight December 10 in Manchester, England. Molina won that six-round bout only by majority decision against Jamal Woods, who entered their September 2 fight in Palmhurst, Texas, with an unsightly record of 13-35-7.

breazeale vs whyte should be next for the mandatory spot for the wbc title..although both average boxers tbh..says a lot about the shallow heavyweight division

[QUOTE=juggernaut666;18390065]The ironic thing here is Breazeale is a lot more dangerous than a 6'2 counter puncher with NO names on his resume yet even Wilder fans did and will call the guy a bum then argue how Wilders resume isnt…

[QUOTE=Andre_parker1;18390001]breazeale vs whyte should be next for the wbc final eliminator..but something tells me breazeale is being groomed for a shot at wilder[/QUOTE] The ironic thing here is Breazeale is a lot more dangerous than a 6'2 counter puncher with…

breazeale vs whyte should be next for the wbc final eliminator..but something tells me breazeale is being groomed for a shot at wilder

Wilders should not waste time take this fight in Feb... Wilders/AJ won't be til after the summer something like fall of 2018 or spring of 2019 so give yourself a chance to add more stay busy fights