In the wake of Jarrell Miller’s suspension and eventual ousting from his scheduled heavyweight title shot against Anthony Joshua, there has been plenty of shaming of fighters for either blowing or not taking chances offered to them in the sport.

On five week’s notice, Miller’s slot had been offered to a variety of heavyweights, at least two of whom, Adam Kownacki and Luis Ortiz, have cited other scheduled bouts or a lack of preparation time as reasons to turn down the lucrative opportunity. Such is their prerogative, to take or not take fights, for any reason under the sun. In a boxing economy that values being undefeated, or having the smallest number of losses possible, even a short-notice bout that comes with a massive lump sum payment can feel like prematurely cashing out on one’s career. This is particularly true for fighters backed by Al Haymon, or other powerful managers and promoters, who have every reason to believe their paydays will keep rolling in regularly for many years to come.

It's a luxury that fighters in a place of promotional privilege can enjoy, and one that they have earned. But it’s important to remember the many fighters who have had to risk it all to even get a chance to fight for a world title.

Doheny had a long and demoralizing road to becoming a world champion. Having not won a senior national title in Ireland, the Olympics never materialized for Doheny, and as a result, neither did a big money promotional deal upon his turn pro. Without a hefty stipend coming in, and with Ireland’s unemployment rate spiking at over 15% at one point, Doheny moved to Australia, starting his pro career, and supplemented his boxing checks with a full-time scaffolding gig. He fought in places like The Irish Club, an Irish pub and restaurant, and Club Punchbowl, a ballroom better known as a wedding venue than a fight mecca.

Though he kept winning, and kept improving, the financial feasibility of continuing as a fighter was in question, especially when starting a family. The low point perhaps came in 2017, when he was just a step away from a world title shot. Doheny had a scheduled title eliminator bout with Evgeny Gradovich fall through. Having gone through a full training camp with no payday at the end of it, he had effectively lost money. He wasn’t sure if he would be able to buy a Christmas present for his son. Despite how far he’d come, and how close he was to a title, boxing no longer seemed worth it. He was ready to quit.

It wasn’t the first time he was ready to walk away. Doheny has talked about being ready to pack his bags and fly home to start a life after boxing, but he didn’t have enough money to book the flight, and not wanting to put the flight on his girlfriend’s charge card, he stayed and plugged away. 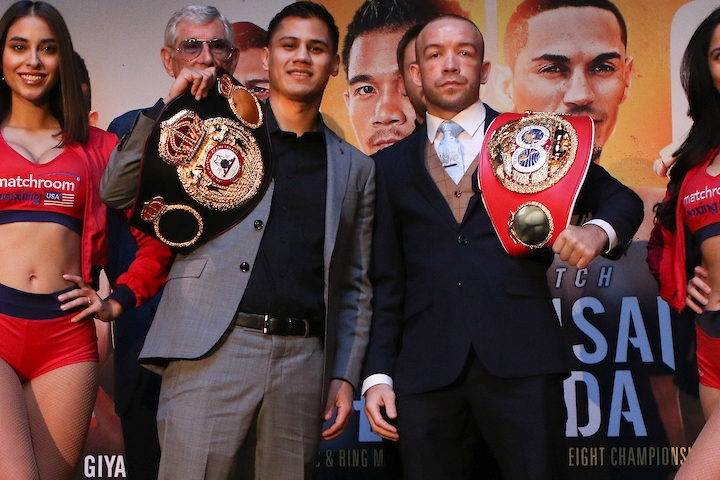 Luckily, a phone call came in for another title eliminator bout, this time in Thailand against Mike Tawatchai. Doheny pulled off a split decision win on the road, earned enough money to buy a Christmas present for his child, and for the first time in his professional career, had a shred of certainty: He was owed a world title shot.

Ultimately, he would make the most of that chance, defeating Rysosuke Iwasa in Japan by unanimous decision. The win made him Ireland’s 21st world champion, and to celebrate, his hometown of Port Laois, 50 miles southwest of Dublin, held a parade in his honor. The man who left Ireland because he “believed he could make something of himself” was able to return home with the proof that he was right.

But being a 122-pound world titleholder doesn’t even necessarily guarantee economic stability of any kind. It wasn’t until Doheny inked a contract with Matchroom Sport, which guaranteed him bouts on DAZN, that he finally felt at ease. Eleven days after signing, he fought at Madison Square Garden, making the first defense of his world title over Ryohei Takahashi.

Doheny’s journey mirrors the plight of so many young strivers in the modern world. Born into a gig economy, plenty of young professionals work one or more jobs to finance the chasing of their dreams. Doheny’s story starkly shows the bleak reality of many people’s situations, whether they are fighters or professionals of any kind. At some point, no matter how close you feel you are to achieving your goals, or how much you feel you may deserve it, it is no longer financially feasible to try any longer. Doheny was objectively one of the ten best 122 pound fighters on the planet, and yet he was one missed phone call away from being back scaffolding in Bondi Junction to ensure a regular wage.

Not everyone is in a position to chase their ambitions, let alone able to make the call on when they take their big chance. Doheny seems acutely aware of that, even calling for the unification bout with Roman before his first defense against Takahashi. Time on top of the sport can be fleeting, and boxing is unfair. One bad decision goes against you and suddenly you’re wondering when the next payday is coming and how much it might be. Doheny lived in that nightmare for much longer than he ever deserved to, so now, there’s no chance he won’t take to keep his dream alive.

Román vs Doheny is a very good fight, people

Good article! Does put in stark contrast the privaledges that Ortiz and Kownacki have. That said I think what with Miller the cynic says both camps are spooked about drug testing. One guy is fat and shares camps with Miller.…