Dmitry Mikhaylenko Secures a Much Needed Win in Russia

Russia - He badly needed a win, and he got one, as light middleweight Dmitry Mikhaylenko (23-3, 10 KOs) put a halt to his losing streak at two by overcoming the resistance of a hard-nosed opponent in Alexander Sharonov (9-3-2, 4 KOs) to win a unanimous decision over ten complete rounds.

Both boxers rumbled in close quarters but Mikhaylenko's superior experience and vitaliy meant, as he was just slightly better than Sharonov. Neither boxer was hurt during the contest, and Mikhaylenko, who had wins over Breidis Prescott, Johan Perez and Karim Mayfield in his past, ended up a winner on all three judges' scorecards with the identical score of 97-93.

Super featherweight Mark "Canelo" Urvanov (13-2, 6 KOs) got back to the winning column following his recent one-sided loss to Mukhammadkhuja Yakubov with a tough-fought unanimous decision over aggressive but short and limited Uzbek Feruzbek Yuldashev (12-4, 6 KOs) in a scheduled eight-rounder. 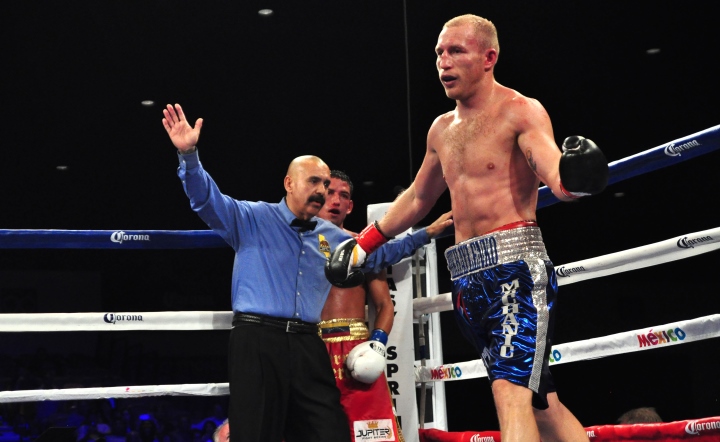 Uzbek lightweight Ravshanbek Umurzakov (4-0, 3 KOs) was forced to go the distance for the first time in his career, being taken the distance by Belarussian trialhorse Ilya Reutskiy (9-19-1, 5 KOs). Umurzakov scored a unanimous decision, which was also Reutskiy's thirteenth consecutive career loss.

Rising Vladislav Krasnoshein (4-0-1, 2 KOs) prevailed over tough-as-nails but technically limited journeyman Evgueny Smelov (3-6-1, 2 KOs) over six rounds in a tough fight. Smelov was hurt big time in round one by several wicked body shots but managed to somehow survive the onslaught. The bout was controlled by Krasnoshein but Smelov had his moments too.