A pick-‘em fight on paper proved to be just as competitive in the ring.

D’Mitrius Ballard and Yamaguchi Falcao fought to a 10-round draw in their middleweight crossroads bout Thursday evening at The OC Hangar in Costa Mesa, California.

Scores were 97-93 in favor of Ballard and 95-95 twice to produce the majority decision draw. 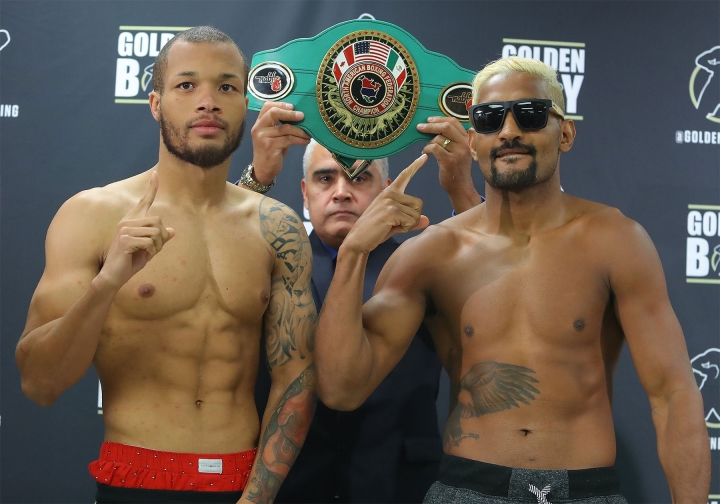 Ballard boxed smartly in the opening round, pawing with his jab and following up with right hands. Falcao was able to keep his space, fighting deep in his southpaw stance and able to slip most of the incoming power shots. Despite the southpaw versus conventional style, the action was relatively clean on the inside, both boxers making a conscious effort to play defense.

Falcao—who captured a Bronze medal for Brazil during the same 2012 London Olympics that saw his younger brother, unbeaten middleweight Esquiva Falcao win Olympic Silver—made key adjustments in round two, offering more head movement and his herky-jerky style proving difficult to time by Ballard, an unbeaten boxer from Temple Hills, Maryland. Two-way action along the ropes saw Brazil’s Falcao get the better of the sequences, closing the gap and connecting with straight lefts upstairs.

The sequence prompted Ballard’s renowned head trainer Calvin Ford to give him an earful on the shift in tide, although the pep talk didn’t quite translate into successful in-ring execution. Falcao fought with confidence throughout round three, at times backing up Ballard and avoiding most of the incoming shots while scoring with counter opportunities.

Ballard picked up the pace in the middle rounds, though Falcao was still landing the more telling blows. By the end of six rounds, Ballard’s corner urged him to bite down and take the lead, although never losing control and offering the simple advice of winning one round at a time.

It had an immediate effect, as Ballard put together his best round of the fight in round seven, connecting with several right hands early and late. The unbeaten prospect connected with a right hand on the inside to start the frame, stopping Falcao in his tracks although not to the point of threatening a stoppage. Still, it was enough to slow down the Brazilian southpaw for the first time in the fight.

A far too close to call round eight prompted Coach Ford to light a fire under his charge, urging Ballard to “dig deep down into your soul.” Ballard responded in round nine, pumping his jab and shooting a right hand behind it. Falcao was still bouncing on his toes, just not with the type of offensive output that allowed him to sell the judges that he was in control.

Both boxers were urged to go out and take the 10th and final round, though from varying viewpoints. Ballard’s instructions were to go out in style, Falcao to make sure to leave no doubt while making sure to not get caught with anything big. What should’ve been a fight became a tactical final three minutes, fatigue setting both ways as the final seconds saw the two of them clinch and pose, playing to the crowd if not the judges.

Naturally, each combatant felt they deserved the nod, although the general sense was that the even verdict was the right call.

Ballard’s record now moves to 20-0-1 (13KOs). Falcao is now 16-1-1 (7KOs), failing to produce a win for the second straight fight as he entered on the heels of an upset loss to Christopher Pearson this past May.

The bout streamed live on DAZN, serving as the chief support to a junior welterweight bout with title implications between Canada’s Yves Ulysse Jr. and Venezuela’s Ismael Barroso.