Dirrell: Benavidez-Porter Sparring Has Nothing To Do With Me

Anthony Dirrell doesn’t put much stock into David Benavidez’s sparring session with Shawn Porter—especially since it won’t at all prepare the unbeaten super former super middleweight titlist for their own upcoming clash.

“I think he sparred with Shawn one time. That has nothing to do with me,” Dirrell (33-1-1, 24KOs) noted during a recent media conference call to discuss the first defense of his second reign as a 168-pound.

His upcoming clash with Benavidez (21-0, 18KOs) takes place Sept. 28 at Staples Center in Los Angeles, Calif. The bout serves as the chief support to a Fox Sports Pay-Per-View event where Porter (30-2-1, 17KOs) appears in the main event in a welterweight title unification bout versus Errol Spence Jr. (25-0, 21KOs). 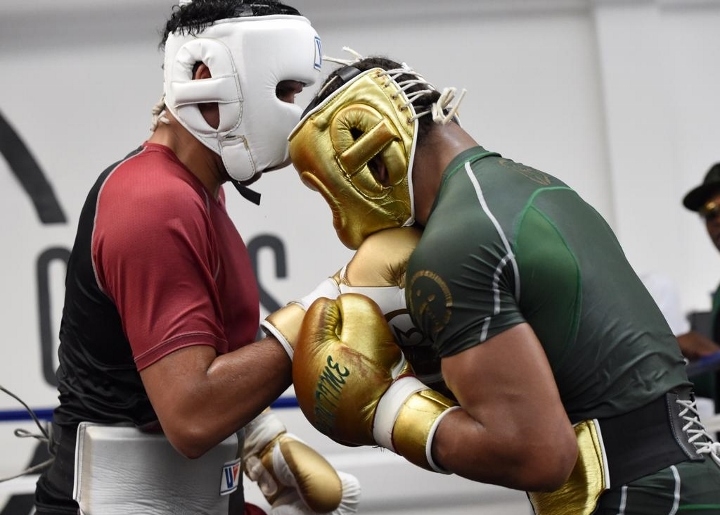 Arizona’s Benavidez—a former titlist who was stripped after testing positive for cocaine during random drug testing through the World Boxing Council Clean Boxing Program (WBC CBP)—agreed to a one-day sparring session with Porter—an Akron, Ohio native now based out of Las Vegas—which generated considerable media attention, particularly given the three-division weight difference and that neither reflects a style or physical resemblance to their upcoming opponents.

The 22-year old Benavidez is 6 1½” and is right-handed, four inches taller than Spence, a 5’9 ½” southpaw from DeSoto, Texas. Similarly, the squat Porter barely at all resembles the 6’2” Dirrell who enjoys a slight height advantage against an opponent 12 years his junior, unlike Porter who is at a height disadvantage versus Spence, as often is the case in most of his career bouts.

“Shawn is 5’2”, 5’3” maybe,” quips Dirrell, who first reign lasted just eight months from Aug. 2014-April 2015 before reclaiming the belt in a technical decision win over Turkey's Avni Yildirim this past February. “I don’t know how tall Shawn is (note: Porter is listed as 5’7”)  but we don't have the same fighting style or nothing.

“Shawn can get something (out of it) but it’s sparring at the end of the day. He spars who he can spar. It gives him the experience but don’t do anything else.”

Dirrell make it seem likenhe got a chance in winning

Not a single thing in common between the two. Dirrell will lose just because Benavidez is better but nothing to due with the sparring because that's a no contest if Benavidez was to open up!