A loaded fight bill is in store Saturday evening at O2 Arena in London, England. Headlining the show, top-rated heavyweight contender Dillian Whyte (25-1, 18KOs) takes on unbeaten Oscar Rivas (26-0, 18KOs)— a Colombia-bred heavyweight who fights out of Canada—with a major title fight very much within reach for the winner.

Whyte has won 10 straight heading into the night, his lone loss coming at the hands of Anthony Joshua when both were unbeaten rising prospects in their Dec. 2015 clash. The Brixton (England)-based boxer—who originally hails from Jamaica—fights for the first time since a thrilling 11th round knockout of Dereck Chisora in their war of a rematch in this very venue last December.

Rivas enters on the heels of a 12th round stoppage of Bryant Jennings this past January. The win marks a career best performance for the unbeaten 32-year old, who fights outside of North America for just the second time in his nine-year career. 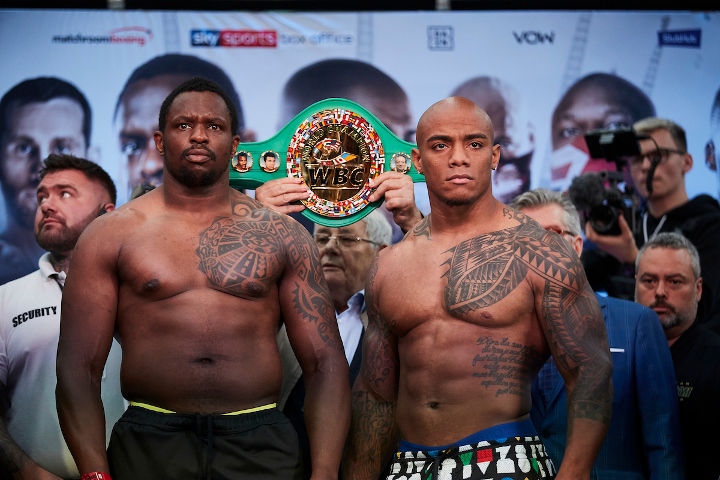 In a matchup between unbeaten British cruiserweights boasted identical records, it was only fitting that it came down to a single point in determining a winner. It would be Richard Riakporhe, who scored a 7th round knockdown which provided the margin of victory in a 10-round split decision over Chris Billam-Smith.

Despite the knockdown, Billam-Smith managed to land a 96-93 tally on one scorecard but was overruled by scores of 95-94 and a way off 97-92 in favor of Riakporhe.

The pair of unbeaten Brits traveled very different paths to reach this point in their respective careers. It showed in the early rounds, as their fighting styles didn’t particularly mesh well in producing frequent clinches and little in the way of sustained action.

A major shift in momentum came in round seven, when Riakporhe scored the bout’s lone knockdown. His right hand has served as his signature punch but it was a left hook which left the Shane McGuigan-trained Billam-Smith draped along the ropes, which referee Robert Williams accurately ruled a knockdown. The sequence was set up by a body shot which briefly stunned Billam-Smith and allowed Riakporhe to go on the attack.

It also took a bit out of his gas tank, as the Londoner wasn’t nearly as active in a round eight. Billam-Smith sought to take advantage of the development but also showed significant signs of fatigue by round’s end.

Riakporhe dug deep in his best efforts to close the show, landing a left hook late in round nine only for Billam-Smith to survive the blow and rally hard in the 10th and final round. It wasn’t enough to preserve his perfect record, falling to 9-1 (8KOs) despite his belief—as well as several in the venue—that the wrong boxer was awarded the victory.

Nevertheless, it’s Riakporhe who retains his unblemished record and regional title as he improves to 10-0 (8KOs) with the hard-fought, if sloppy and uneven affair .

Super lightweight newcomer Dalton Smith (2-0, 1KO) picked up the first stoppage of his young career, forcing late replacement Ibrar Riyaz to retire in his corner at the end of two rounds.

The bout was as competitive as you'd expect between an unbeaten rookie and a boxer with 165 career losses coming into the night. Riyaz jumped in on less than a day's notice to replace originally scheduled Reece Smith. The Berkshire clubfighter gave it the old college try, but six minutes of one-way traffic was enough to end the fight and run his losing streak to 41 straight in falling to 6-166-4 (3KOs).

Smith made his pro debut this past May, going the four-round distance.

Lawrence Okolie picks up his third consecutive stoppage win—all in 2019—after stopping Argentina’s Mariano Angel Gudino in the 7th round of their regional cruiserweight title fight.

The 2016 Olympian from Hackney, London floored Gudino three times in forcing a stoppage at 2:59 of round seven.

Action prior to that point was typical of Okolie’s career to date—looking like a world beater at times, going through the motions at others. The 26-year old boxed early on as Gudino (13-3, 8KOs) showed little interest in exchanging or even putting up a fight of any kind. The visiting boxer’s constant lateral movement with little offense to accompany the tactic made for a dull and frustrating affair in the early rounds.

Okolie (13-0, 10KOs) seized the initiative in the second half of the contest, putting his 6’5” frame to good use in cutting off the ring and forcing Gudino to fight back. It ultimately resulted in a mercy stoppage. Gudino hit the deck in round seven courtesy of a right hand, left hook combo along the ropes and again late in the frame from a right uppercut which forced him to a knee.

By that point, referee Robert Williams had seen enough, waving off the contest just before the bell to end round seven.

Promoter Eddie Hearn suggested after the contest that Okolie could be moving towards a title fight later in the year, which suits the boxer just fine. Hearn, however, would prefer one more step-up fight given the lack of action failing to provide a sufficient litmus test.

Dan Azeez remained perfect in the pro ranks following a 6th round stoppage of Charlie Duffield in the opening bout of the telecast.

Action was all one way in the matchup of London-based light heavyweights, with Azeez jumping out to a strong start and forcing an aggressive pace. Duffield was game but quickly fell behind and reached a point where his health was being called into question.

With his left eye rapidly swelling shut, Duffield (7-2, 6KOs) appeared well on his way out heading into the second half of the scheduled 10-rounder. Azeez finished the job, battering his overmatched foe and flooring him which prompted an immediate stoppage at 2:49 of round six.

Azeez improves to 9-0 (6KOs) with the win, his third of 2019. The unbeaten Londoner made his first appearance at O2 with this fight, likely with many more fight nights to come at the boxing hotspot.

Duffield falls to 7-2 (6KOs), snapping a four-fight win streak in the process.

I thought the officiating, judging and announcing for the Riakphoe vs Billam Smith fight was overall horrendous. The referee allowed Riakphoe to grab CBS and push him into and overtop of the ropes, also saw quite a few forearms and…

Whyte looks fat and untrained. Rivas gotta win and make a statement. But Dillian can take a punch.

The rr v billon Smith fight was also boll***s, I started doing a bit of house work during that one!