Yesterday, July 24, BoxingScene.com reported that an "A" sample taken from Dillian Whyte by United Kingdom Anti-Doping (UKAD) tested positive for one or more banned substances prior to Whyte's July 20 fight in London against Oscar Rivas. BoxingScene has now confirmed that the substances were epimethandienone and hydroxymethandienone, two metabolites of the banned drug Dianabol.

A metabolite is a byproduct of the body breaking down or metabolizing a drug into a different substance. When a drug is leaving the user's system, it leaves these intermediate end products.

Dianabol is an anabolic steroid that is taken orally (often in tablet form). It was developed in 1955 to treat hypogonadism but is no longer used medically and is no longer legally available in many countries, including the United States. It can still be purchased in the United Kingdom and is often used as a performance enhancing drug (particularly by bodybuilders). Among its many side effects, it can cause serious liver damage. 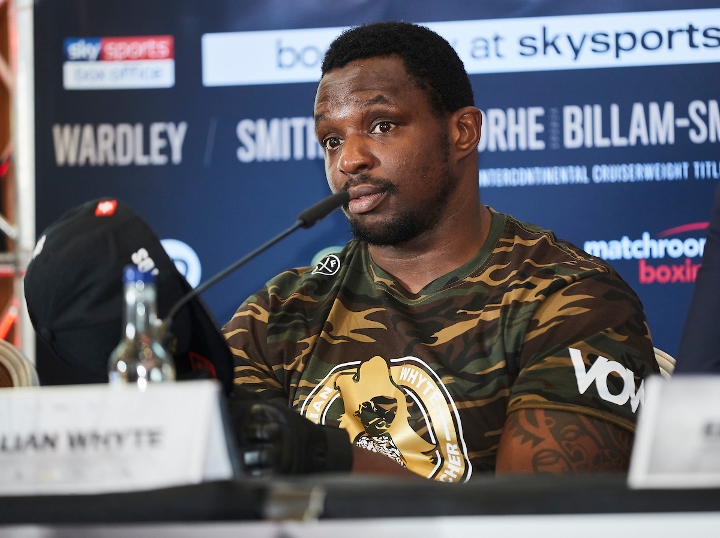 The British Boxing Board of Control was advised by UKAD prior to Whyte-Rivas that Whyte had tested positive for epimethandienone and hydroxymethandienone. However, it allowed the fight to proceed as scheduled without notifying the Rivas Camp of the finding.

Earlier today, Robert W. Smith (general secretary of the BBBC) declined to address the issue other than to issue a statement that read, "United Kingdom Anti-Doping undertake all antidoping procedures on behalf of British Boxing Board of Control and any subsequent findings, decisions, suspensions and sanctions are upheld by the British Boxing Board of Control in line with United Kingdom Anti-Doping. No further comment will be made at this time."

Smith's statement came on the heels of a statement issued yesterday by Eddie Hearn (Whyte's promoter) on social media that read, "Further to reports, I can confirm that both Dillian Whyte and Oscar Rivas were subject to extensive VADA and UKAD testing for their bout. Both fighters were cleared to fight by both bodies and the BBBofC."

However, Hearn's statement did not deny that Whyte's "A" sample tested positive for an illegal performance enhancing drug. And in no event does VADA "clear" a fighter to fight. VADA doesn't adjudicate test results. It simply reports its finding to all contractually-mandated parties.

The recent ring death of Maxim Dadashev underscores the dangers inherent in boxing. The use of illegal performance enhancing drugs adds to these dangers by enabling fighters to punch each other in the head harder than would otherwise be the case. At the same time, it has become painfully clear that most regulatory bodies lack the knowledge, financial resources, and resolve to address the issue of illegal PED use in a constructive manner.

It's now widely understood that the Voluntary Anti-Doping Association (VADA) under the leadership of Dr. Margaret Goodman offers the most comprehensive, fairly administered PED testing in boxing. The powers that be in the sport should act now in conjunction with VADA to put teeth in PED enforcement.

Matchroom Boxing in concert with Sky Sports and DAZN, Queensberry Promotions in concert with BT Sport, Top Rank in concert with ESPN, Premier Boxing Champions in concert with Showtime and Fox, all promoters and networks, should take the following stand: In order to fight under our promotional banner and on our network, fighters will be required to submit to year-round VADA testing. A small percentage of each TV license fee will be used to fund the program.

Alternatively, promoters, TV executives, and fighters can continue to play Russian roulette with a second bullet labeled "PEDs" inserted the chamber of each gun that is pointed at a fighter's brain.

Thomas Hauser's email address is thomashauserwriter@gmail.com. His next book – A Dangerous Journey: Another Year Inside Boxing  – will be published later this year by the University of Arkansas Press. In 2004, the Boxing Writers Association of America honored Hauser with the Nat Fleischer Award for career excellence in boxing journalism.

Was it ever explained how those Dianabol metabolites found their way into Dillian Shyte's bloodwork?

[QUOTE=_Rexy_;19949654]Or maybe Vada didn’t detect them, and then after the final Vada test he stopped taking his cycle AND his masking agent, and the DBol has a stronger half life than the masking agent causing him to piss dirty for…

[QUOTE=kafkod;19949653]I don't know what you're on about there. The traces of metabolites in Whyte's UKAD sample were so low level that VADA tests apparently didn't detect them. Or maybe VADA did detect them, but didn't think they were caused by…

[QUOTE=_Rexy_;19949624]That’s the dumbest thing I’ve ever heard. if I go out and rape someone tonight, I don’t get to show the judge a rape kit from last week as proof I’m innocent lmfao[/QUOTE] I don't know what you're on about…