Heavyweight contender Dillian Whyte will not be shocked if there is a big upset in his division on Saturday night.

The contest takes place at the Barclays Center in Brooklyn, New York - with Showtime and Sky Sports televising the contest. 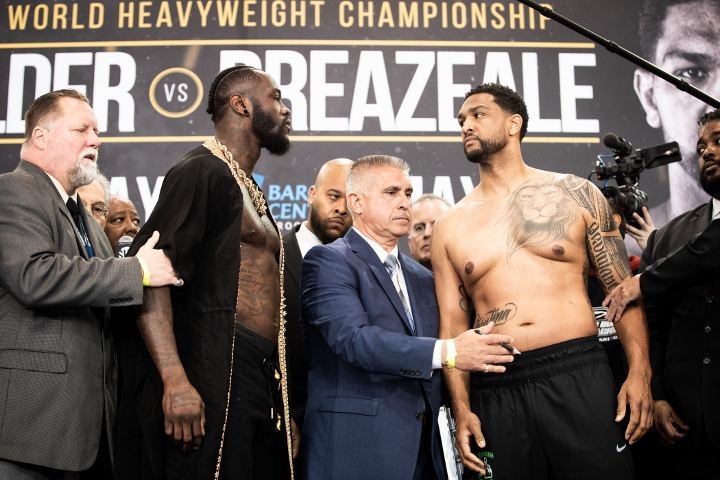 Whyte, who is ranked at number one by the WBC, has been steaming over the sanctioning body allowing Breazeale to get a mandatory crack at Wilder.

There has been a lot of controversy over the WBC sidestepping Whyte in favor of Breazeale.

Breazeale is a huge underdog in the contest.

He has one loss on the record, which came in 2016 at the hands of current unified champion Anthony Joshua.

Breazeale has won three fights since, and Whyte gives him a shot at pulling off the upset.

"I wouldn't be surprised," Whyte told Sky Sports. "Deontay Wilder, I wouldn't want to be one of his handlers or his manager because they must have nightmares and headaches watching him fight all the time, because he's not good at any one thing. He's not a good boxer.

"I wouldn't be surprised if Breazeale beats him, because Breazeale seems to be tough and he seems like he can take a punch."

But, Whyte is still backing the power of Wilder to overcome Breazeale.

"I just see Wilder keeping out of the way of him and drawing him onto punches and just tagging him, because Breazeale is not very good defensively," Whyte added.

"He takes a good punch and he's got a lot of heart, and he will try to come to fight, but I just think Wilder using his speed against him and biding his time against him, drawing him out and then knocking him over mid-fight."

[QUOTE=Longhaul;19751784]Hunter can’t help him .Breazeale looks like one of those over hyped big white guys that that pop up every decade.He won’t make it out of the first.[/QUOTE] Credit where credit is due. You made the right call mate, congratulations.

[QUOTE=giant_king;19753179]Dillian your just a roid cheat like fury Ortiz povetkin and Miller.dont get upset because you have to earn the right to fight deontay.man up fight Ortiz or your other cheating buddy fury[/QUOTE] Someone stating the truth. Well said.

Apparently the idiot author of this article should have read the whole interview before making a title that is totally misleading. "I just see Wilder keeping out of the way of him and drawing him onto punches and just tagging…

It is Heavyweight Boxing, the biggest Upsets in History comes in this Division so no I wouldn't be surprised either if not a Upset then at least a scare or knocking Wilder down is possible However, it is very likely…