Dillian Whyte capped his most memorable week in a place he feared he wouldn’t see for quite some time—in the ring and with his hand raised in victory.

Scores were 98-93 and 97-93 twice in favor of Whyte, who was able to breathe a sigh of relief after being cleared one day ago from a months-long drug testing investigation and more so once the final scorecards were read.

“I boxed nowhere near my standard,” Whyte admitted of his performance. “I was out of the ring for (five) months, I kept on training, but took the fight on three weeks notice. I wanted to stop him but he was tough.” 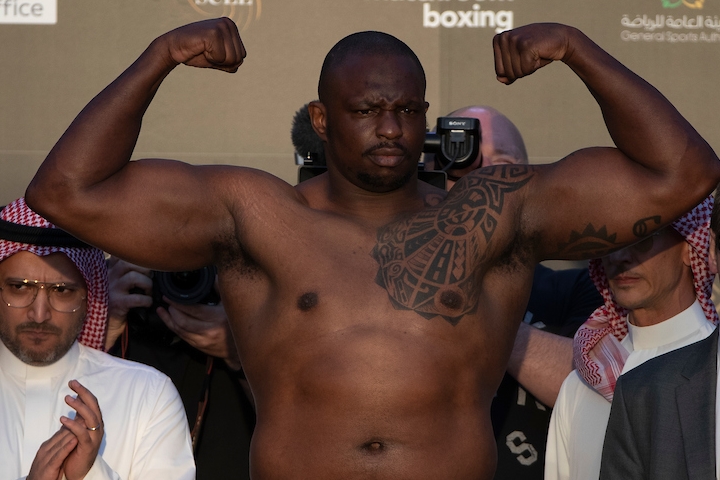 Between the fight being put together on late notice and the difference in size and reach, Whyte initially struggled to get his offense untracked. Wach was able to use his long jab to keep his shorter and stockier foe on the outside, even if it didn’t always land. Whyte managed to close the gap towards the end of the round, landing overhand rights which Wach took well.

Both heavyweights made a point to target the body, a smart strategy given that neither boxer was in peak physical condition. Wach was a bit more dedicated with the attack, while Whyte took his offense upstairs, shooting off right hands with hopes of following through with left hooks although the Polish heavyweight managed to consistently deny him that opening.

Wach took advantage of the slow pace of the bout, returning to his jab in round four and using the stick to set up right hands. Whyte alternated between shoulder roll and earmuff defense, firing off one shot at a time which had little effect on his busier foe.

Whyte went back to the body at the start of round five, offering a left hook downstairs which proved purposeful in momentarily shutting down Wach’s offense. It held up for most of the frame until Wach was able to connect with a pair of heavy right hands in the closing seconds.

The accelerated pace towards the end of round five carried over at the start of the sixth, with Wach outworking Whyte and able score with right hands. Whyte went to work in the seventh, going downstairs with hooks and coming back up top while able to keep the taller Wach within his desired punching range. Wach adjusted by round’s end, connecting with a right hand which Whyte took well.

A shift in tactics came about in round eight, with Whyte sliding backwards and drawing in Wach before catching him with quick right hands. Wach continued to come forward, but his offense limited to one jab at a time, reluctant to throw his right as Whyte was making him pay on such occasions. The tide shifted in the closing seconds of the round, when Wach managed to get the better of an exchange with a left hook which briefly wobbled Whyte.

Time was briefly called early in round nine as a left hook by Whyte strayed very low. It didn’t discourage the Brit—aptly nicknamed “The Body Snatcher”—to continue to work downstairs, although Wach was able make him pay with crushing shots upstairs. An effort by Whyte to respond instead left him open for an ensuing attack with Wach ending the round with a punishing sequence along the ropes.

Whyte showed bravery in fighting through a nearly swollen shut right eye, closing the fight strong with solid shots upstairs. Wach was forced to cover up and ride out a late storm, managing to get in a left hook but eating two in return as Whyte sealed his latest win.

Wach falls to 35-6 (19KOs), with five of the losses coming after his lone career title fight in a 12-round loss to Wladimir Klitschko in 2012.

Incredibly, Whyte (27-1, 18KOs) is still waiting on his first career title fight. That status was put at risk after a June drug test showed traces amounts of a banned substance surrounding his July 20 win over Oscar Rivas, a fight where he had to appear before the National Anti-Doping Panel that morning just to receive clearance.

He was finally fully absolved of any wrongdoing by United Kingdom Anti-Doping (UKAD) on Friday, just one day before a fight he only had less than three weeks for which to prepare.

Still, it was all enough to view 2020 in a far more positive light.

“It’s good hearing that,” Whyte said of being cleared on all fronts. “I went from being a hero to being masquerading as a nothing in the manner of a day. I appreciate Eddie and everybody sticking with me. Two, three months ago I was thinking about walking away from boxing.”

Instead, he can proudly walk towards a brighter future in 2020 and beyond.

In a swing bout, Amateur star Ivan "Hopey" Price (2-0, 1 KO) picked up a third round stoppage over Swedi Mohamed (12-7-2). Price, only 18-years-old, broke Mohamed down until the referee jumped in and waved off the fight.

The bouts served in a supporting capacity to the heavyweight title fight rematch between California’s Andy Ruiz (33-1, 22KOs) and England’s Anthony Joshua (22-1, 21KOs). Both bouts along with the heavyweight-themed undercard air live on Sky Sports Box Office in the United Kingdom and stream live on DAZN in the United States.

[QUOTE=LetOutTheCage;20247456]Canelo was officially banned for 6 months, Lucas Browne was also banned for clenbuterol and I believe he had a lot less of the stuff in his system.If you honestly believe Canelo's story then I feel sorry for you. This…

[QUOTE=Brettcappe;20249400]You keep asking the same questions. Do some fighters get artificial rankings? Absolutely! I have been following boxing since the 70's. My first "favorite" fighter was Smokin Joe frazier. Are the sanctioning bodies corrupt? Of course but Dillian Whyte is…

[QUOTE=Laligalaliga;20249303]And who did the old Mab fight to get a shot? Who did spilka, areola, dauhapas and co fought to get a title shot? You coin this things....there is a reason they make up every excuse to keep whyte away.[/QUOTE]…

[QUOTE=Brettcappe;20249273]I can't answer any of the questions that you asked? I do not rank fighters for the W.B.C. Should Ortiz have been ranked as high as he was? Not sure but I am sure that Whyte refused to fight an…

[QUOTE=Laligalaliga;20247144]Its better you log off because you can't answer any of the questions I asked you. Who the hell did Ortiz fought to get 2 title shots to wilder? Most wilders title defense has been voluntary, why can't whyte get…