The former two-time title challenger from Las Vegas returned to the win column the hard way, outworking the local favorite to claim a 10-round decision Saturday evening at Bridgestone Arena in Nashville, Tennessee.

Scores were 96-92 twice and 97-91 in favor of Magdaleno in their Fox-televised battle of lightweight southpaws.

Magdaleno did his best to pull the crowd from the local kid, literally two-stepping his way into the ring in an attempt to embrace the environment. It never had a chance to work, although the Las Vegas native found a way to take the Music City crowd out of the mix by night’s end.

"Experience has everything going for me," stated Magdaleno, whose three losses have all come to title-fight level opposition. "In my previous fight (a one-sided 7th round knockout loss to Teofimo Lopez, now a lightweight champion), I lost my head. This time I took my time. My camp said slow it down. Happy for the victory tonight." 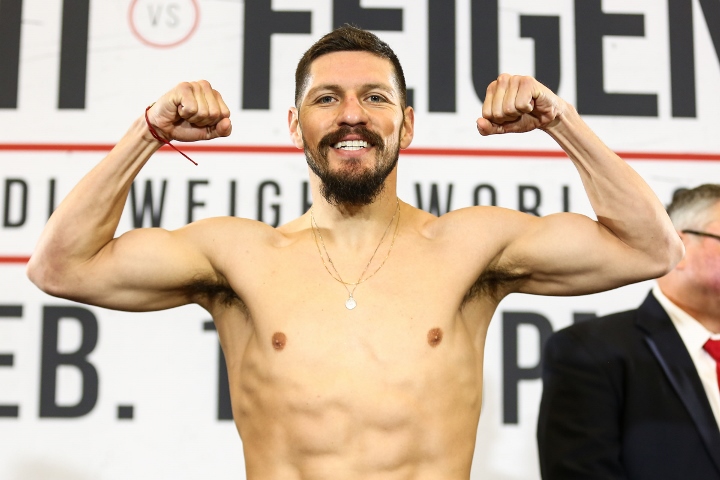 It took a couple of rounds for the veteran boxer to find his groove. A left hand by Dulay landed flush on Magdaleno’s chin in round two, drawing a rise out of the crowd. The fighting pride of Hendersonville—the fourth largest city in the Nashville metropolitan area—continued to control the pace in round three, showing just enough respect for Magdaleno’s title fight pedigree to not throuw caution to the wind, but aggressive enough to not give away rounds nor dull the chants of “6-1-5”,  Nashville’s area code which he proudly displayed across his trunks.

Magdaleno—who is now working with former 122-pound champion Clarence ‘Bones’ Adams—attempted to turn things around in round four, working behind his jab while coming forward in a straight line. Dulay circled to his left, never allowing Magdaleno to fully commit to his punches save for a brief exchange which left the 24-year old with his back against the ropes though able to slip out of harm’s way.

Dulay continued to play defense in round five, though with Magdaleno able to close the gap more frequently in the frame. The Las Vegas native got close enough to send Dulay to the canvas, though courtesy of a low blow just inside the final ten seconds of the round. The sequence drew a stern warning from referee Jack Reiss both as time as was called as well as in between rounds.

Magdaleno picked up the pace in round six, as Dulay struggled with his opponent’s mid-fight adjustment. It came to an ugly head in round seven, when Magdaleno scored the bout’s first knockdown courtesy of a left hand to the midsection. Dulay did his best to sell it as another low blow, but instead had to contend with the mandatory issued eight count.

A real low blow would come moments later, this time resulting in Magdaleno losing a point to offset what would have otherwise been a two-point round for the former title challenger. It was a lesson learned by 33-year old southpaw, who kept his punches chest-level or higher throughout round eight. Dulay seized momentum towards the end of the frame, as a one-two drew a rise out of the crowd in a fight where he’d need a late rally in order to avoid a hometown loss.

Dulay connected with a body shot in round nine, though immediately countered by a left hand upstairs by Magdaleno. The sequence was symbolic of the fight as a whole, with Magdaleno doubling up Dulay on punches landed (165 to 88 overall). A ten-second drill by Dulay at fight’s end was enough to draw cheers from the crowd, but not nearly enough to erase the deficit on the scorecards.

The loss snaps a three-fight unbeaten streak for Dulay, even if he refused to accept the hand he was dealt.

"I absolutely won the fight," insisted Dulay, who falls to 13-2 (10KOs) with his second loss in five fights. "Every round he was hitting me low and in the back and on the hips. It was more times than he got called for. I won that fight 100%."

Meanwhile. Magdaleno breathes new life into a career that was thought to be left for dead after his frightening knockout loss to Teofimo Lopez a year ago. Not that he ever had any doubt such would be the case.

"I knew mentally I could break him down," insisted Magdaleno, who picks up his first win in 17 months as he improves to 32-3 (13KOs). "If I attacked the body I knew I could break him down. He’s a young prospect. He’s taller than me so my plan of attack was to get in close and go to the body."

The bout appeared as the opening leg of a Premier Boxing Champions (PBC) on Fox tripleheader, topped by Ashland City’s Caleb Plant in a homecoming super middleweight title defense versus Germany’s Vincent Feigenbutz.

[QUOTE=Mammoth;20394358]How about Colbert vs Magdeleno?[/QUOTE] Make this fight yesterday. Someone get on it.

[QUOTE=TheMyspaceDayz;20394352]I’d like to see Magadeleno try n halt some other young guys hopes n dreams. Bring him back. All around solid, gritty fighter.[/QUOTE] How about Colbert vs Magdeleno?

I’d like to see Magadeleno try n halt some other young guys hopes n dreams. Bring him back. All around solid, gritty fighter.

Diego ... a real seasoned pro. Always good to see the underdog get the win. Always.