NABF and NABO Super Bantamweight Champion Diego De La Hoya (21-0, 10 KOs) will look to shine before a hometown crowd as he defends his titles against Edixon Perez (16-2, 11 KOs) in a 10-round main event at Plaza De Toros Calafia in Mexicali, Mexico. De La Hoya will fight for the first time as a professional in his native country of Mexico in a bout that will be televised live on TV Azteca at a delayed time of 8:30 p.m. PT.

De La Hoya is an undefeated contender who has built a stellar resume since turning professional in 2013. The 24-year-old scored his most significant victory when he defeated former IBF Bantamweight World Champion Randy "El Matador" Caballero on the HBO-televised undercard of Canelo vs. Golovkin in Sept. 2017. De La Hoya followed this win by defeating Jose "Sugar" Salgado via seventh-round technical knockout in June of this year. De La Hoya is on the verge of a world title shot but will risk that opportunity against Perez.

"I'm delighted to return to my hometown and defend my titles," said Diego De La Hoya. "I've developed my career in the United States, but I'm happy to fight for the first time as a professional in Mexico. There's no better way than to come back as a headliner and on a great platform such as TV Azteca." 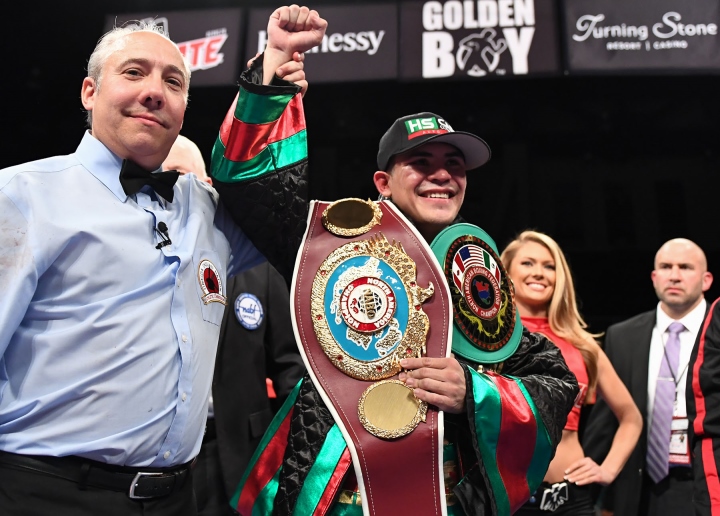 Perez is a 26-year-old native of El Tigrito, Venezuela who is coming off six straight victories, four of them by stoppage. Perez will look to follow in the footsteps of fighters such as the late Edwin "El Inca" Valero and Jorge "El Niño de Oro" Linares, boxers with Venezuelan blood who scored impressive wins against tough Mexican fighters.

"It is a privilege to fight in Mexico against a renowned boxer like Diego De La Hoya," said Edixon Perez. "I'm going to my opponent's backyard, but I am not going out without a fight. Local fans will find out who is Edixon Perez on the day of the fight."

In the co-main event, Seniesa "SuperBad" Estrada (14-0, 4 KOs) of East Los Angeles, Calif. will fight for the vacant WBC Silver Light Flyweight Title in a 10-round fight against Debora Rengifo (10-5-1, 5 KOs) of Rio Chico, Venezuela.

The undercard of this event will feature five competitive fights with local prospects along with a series of amateur bouts to begin the night.

Jesus Riegos (5-0, 3 KOs) and Cristian Pimentel (6-2, 2 KOs) will meet in a four-round super bantamweight fight in a battle between Mexicali, Mexico natives.

Jose Dorantes (15-0, 9 KOs) of Tijuana, Mexico and Alexandro Zarate (6-6, 4 KOs) of Navojoa, Mexico will clash in a featherweight fight scheduled for six rounds.

Miguel Espinoza (3-3, 1 KO) will participate in a four-round lightweight fight against fellow Mexicali, Mexico native Alejandro Leon in what will be the latter's professional debut.