After enduring a difficult couple of years in which he was unable to secure important fights at the level with which he had been used to, Argentina’s Diego Chaves is now a promotional free agent and looking at options, possibly in the United States.

Chaves competed last Saturday night in Buenos Aires, attaining a second round stoppage win over experienced Jean Carlos Prada of Venezuela.  Prior to that he fought in November and July of 2016 following a 19 month lay-off after his draw with Timothy Bradley.

“I’m resting for a few days with my family but next Monday I’ll start training again,” Cháves told BoxingScene.com this week. “I’m going to work here in Argentina but the idea is to fight again in the US.  If I fight there I’d probably head out two weeks beforehand to finalise things.  I want the big fights, I showed my best level on Saturday and I have no problem fighting any of the best fighters out there.” 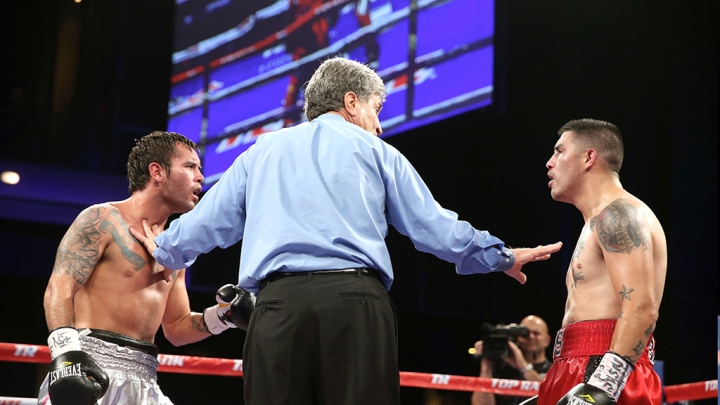 With his lack of activity and at the age of 31, Cháves has not been involved in too many ring wars or suffered much wear and tear, something which he feels can benefit him as he goes in to the next stage of his career.

“I’m in good physical shape, I haven’t taken any punishment and I’m mentally strong,” he affirmed.

“I had problems with my last promoter which kept me out of the ring, but I have fought three fights which I won by knockout and, now I’m feeling happy.

“Let’s hope from now on I can be more active and have big fights.  The time I was out inactive I will get back, I now feel I am at my peak.”

While currently unable to reveal with whom he is negotiating, it would be safe to say that ‘La Joya’ has a plethora of offers on the table based on what he showed during his previous visits to the US.

“It’s good to be a free agent but it helps to have a promoter.  I’m doing good work with important people but I’m also grateful for people who are calling me and asking if I’m available or not.  I have various offers and we’re looking at which one to accept.

“I want to fight Brandon Ríos again.  I deserve the rematch and I said that after my fight in the ring last Saturday.”

[QUOTE=KayDub;17799246]Neither had Chaves.[/QUOTE] ???? Are you retarded? The fight vs Bradley was too ugly and Chaves did a lot of dirty tactics He destroyed the face of Bradly via head-butt and the fight was one of the worst of the…

[QUOTE=Mexican_Puppet;17798737] Rios never fought dirty before the fight vs dirty pig Chavez. [/QUOTE] Neither had Chaves.

If not for Ref Dracula, we'd have seen Chaves KO Rios. So yeah, let's do it again.

[QUOTE=John Locke;17798017]Chaves was unlucky to not get that W over Rios the first time, both guys fought dirty, but the ref was completely incompetent and cost Chaves. This guy is real underrated, he could give anybody at 147 a tough…

[QUOTE=msg76;17797065]Why do people say that Diego Chaves beat him the first time? Rios was tagging him all night it was super close on the scorecards. Chaves was disgustingly dirty in that fight there should have been more points deducted.[/QUOTE] Exactly.…