The last time fans in the United States saw Diego Cháves (24-2-1, 20 KOs) was back in December 2014 when he earned a credible draw with Timothy Bradley in Las Vegas.

The question for many has been as to why the Argentine has not been seen in big fights since that date.  A proposed bout in the United Kingdom against Kell Brook fell through last year when the Englishman sustained an injury and the fight was never rescheduled.

He last fought on July 22 in his native land, albeit off television and will compete this Saturday, again in Argentina.  The reason for his inactivity was explained to BoxingScene.com who reached out to ‘La Joya’ to find out more about his situation. 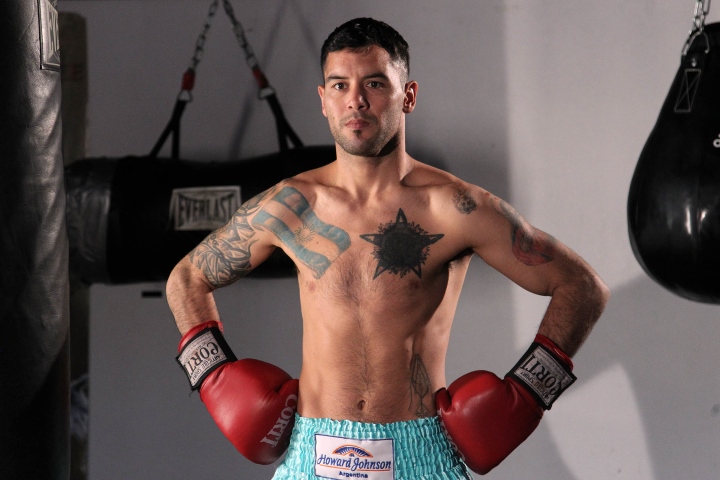 “But I think in 2017, around June or July time, maybe even before, I should be able to have those big fights again and I still believe I can be at the top level for a long time.

“I’m just going through a few things with my lawyer and waiting for the contract to end,” he divulged.

While not going too much into specifics due to legal reasons, Cháves revealed that fellow Argentine Jorge Sebastián Heiland also finds himself in a similar situation.

“I know that Sebastian Heiland has the same issue with my ex manager.  It was a very frustrating year and seven months out after having a great fight with Tim Bradley, to be on the shelf that long has been a real downer for me.  It’s like I’ve had to start again.  But I do believe I have the talents to compete with the best.
“I showed, despite the results, that against Keith Thurman, Brandon Ríos, when they unjustly disqualified me and Bradley who at the time was one of the top three pound for pound fighters in my view, that I have the qualities.”

Cháves fights Luis Pablo Zárate in Quilmes, Buenos Aires this Friday night at 154lbs but has plans to return to 147lbs when he is back on the international stage next year.

“I’m fighting again here in Argentina on Friday and it will be at super welterweight but little by little I will be coming back down to welterweight for the big fights.”

[QUOTE=John Locke;17203106]I'm not sure we're talking about the same fight? Bradley vs Chaves right? [url]http://www.mma-core.com/videos/Timothy_Bradley_vs_Diego_Gabriel_Chaves_Part_1/10088028[/url] Watch that and tell me it wasn't a very competitive, action packed fight. Yeah there were a few accidental headbutts, but overall it was an…

[QUOTE=Strategic1;17200651]Bradley beat Cháves clearly... Should've been 8-4 I think from what I remember. Only reason it was close was because of that horrible swollen eye.[/QUOTE] That's matter of opinion, i'd be interested in seeing a poll result on this question…

Kell Brook should do the right thing & give this guy a shot. He pulled out of an eliminator against Bizier because he was offered a direct shot then they decided to fight Bizier instead who was mandatory by then…

[QUOTE=Mexican_Puppet;17203071]You are crazy, very good? What drug are you consuming? That fight was pure ****, a lot of headbutts and dirties tactics. That fight was boring as hell. With Thurman it was a normal fight but Thurman always makes greats…

[QUOTE=John Locke;17202612]Eh? His fight against Bradley was very good, non stop action. The only boring fight I've seen him in was against Rios and they both were responsible for that.[/QUOTE] You are crazy, very good? What drug are you consuming?…