DiBella: No Way Zepeda Can Hide From Baranchyk In 'Boxing Fan's Kind Of Fight'

Jose Zepeda presents stylistic challenges for anyone he fights, including Ivan Baranchyk.

“I think he’s a very good fighter,” DiBella told BoxingScene.com regarding Zepeda. “He’s active, he’s fundamentally sound and he’s a problem for anybody. He’s able to box enough that there’s nobody out there that’s gonna be able to walk over Zepeda. He’s not that kind of guy. But I think Ivan is physically stronger and Ivan, for all his wildness and power, is a better boxer than people give him credit for. And his defense is a little better than people think.

“I think he showed that after he got hurt with [Josh] Taylor, and he protected himself much better for the remainder of the fight [a 12-round, unanimous-decision loss]. I think this is a dangerous fight because Zepeda is not a guy who is used to losing, but I think Ivan is too strong for him.” 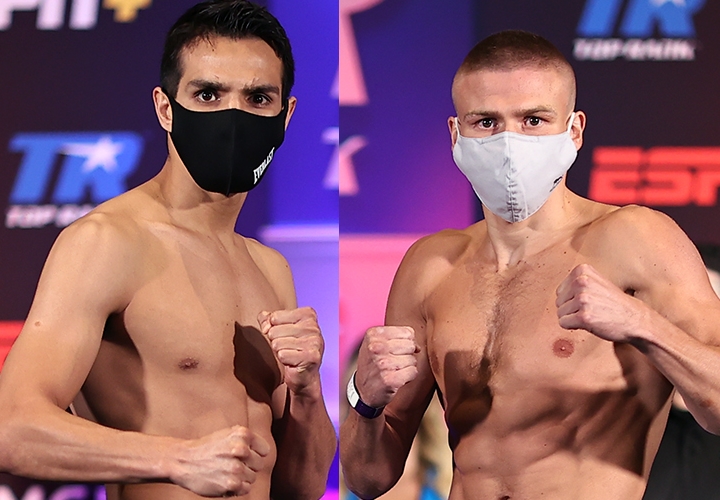 Zepeda, who is ranked second by the WBC, would move closer to a rematch with Jose Ramirez by beating Baranchyk, the WBC’s sixth-rated contender. Ramirez (26-0, 17 KOs) barely beat Zepeda, who lost a 12-round majority decision to Ramirez in their fight for Ramirez’s WBC 140-pound crown in February 2019 at Save Mart Center in Fresno, California.

Baranchyk, 27, and Zepeda, 31, initially were scheduled to box July 7 at MGM Grand Conference Center. Baranchyk – who has lost only to Scotland’s Taylor (17-0, 13 KOs), the IBF/WBA champ – pulled out of that bout toward the end of June due to a rib injury he sustained during a sparring session.

“It’s a sensational fight, honestly,” DiBella said. “It’s a truly competitive fight, with the outcome in doubt. It’s a terrific fight. It’s exactly the kind of fight that, as a fan, you wanna see. And it’s the kind of style matchup you wanna see. There’s no way in the world Zepeda can hide from Baranchyk. He’s gonna be out there trying to confuse and out-box Ivan, and Ivan’s gonna be trying to take his f*cking head off. It’s a boxing fan’s kind of fight.”

Lou DiBella got it wrong again first he said Devervyanchenko, was going to beat Jamall Charlo. Then DiBella said that Baranchyk was going to defeat Zepeda. He was wrong on both of those fights, it was his promoted fighters who…

Oh man, I'm looking forward to this one. Such a nice contrast of styles and temperament. Baranchyk is rugged, aggressive and will keep bringing it. It's the only way he knows how to fight. Zepeda is a skilled boxer and…

Get me this draw, guys, and let me win a coupla hundred with a tenner.