DiBella: Derevyanchenko Showed He Is An Elite Fighter

“He’s an elite fighter,” DiBella told BoxingScene.com. “He’s in the same league as the top four or five fighters [in the middleweight division]. He’s one of those guys. It’s, you know, Golovkin, Canelo, Jacobs, [Jermall] Charlo, Derevyanchenko, Andrade. That’s the top guys in the division. That’s the real top [six]. Those are the guys.” 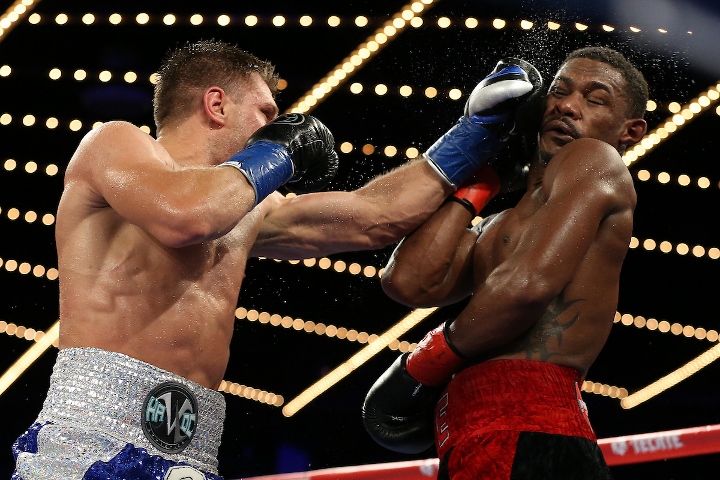 Derevyanchenko (12-1, 10 KOs) was a consensus top-six middleweight, according to most media outlets, before he boxed Jacobs. But Brooklyn’s Jacobs, a stablemate and frequent sparring partner, was undoubtedly the most challenging opponent of Derevyanchenko’s four-year pro career.

Jacobs (35-2, 29 KOs) knocked down Derevyanchenko late in the first round, but the rugged contender recovered and made matters very difficult for his taller, fast, strong opponent. Derevyanchenko won 114-113 on judge Julie Lederman’s scorecard, but judges Tom Schreck and Steve Weisfeld overruled her by scoring their closely contested 12-rounder for Jacobs by the same score (115-112).

Rozier wasn’t the least bit surprised Derevyanchenko gave Jacobs everything he could handle. He worked Derevyanchenko’s corner for his first 12 pro bouts, before understandably opting to serve as Jacobs’ chief second Saturday night.

“He let it be known that [he’s] not that unknown entity,” Rozier said. “[He showed], ‘I am a talent and I am a fighter to be reckoned with.’ He showed that [Saturday night].”

The 32-year-old Derevyanchenko didn’t leave The Theater at Madison Square Garden with the IBF middleweight title. His stock still is more valuable than when Derevyanchenko entered that arena Saturday night, according to DiBella.

“There’s enough competition out there and he’s a free agent,” DiBella said, “so I don’t think that it’s gonna be that tough to get a big fight. He’s probably gonna have to go out there and beat up a couple of guys first. But, I mean, he’s an elite fighter and he showed that.”

[QUOTE=Bardamu;19236849]A level below. That was rather clear. g ran away and was scared to death the whole fight. His entire face was literally reconfigured by Canelo. The swelling still hasn't gone down. Canelo-g II is honestly difficult to watch. One…

Andrade will run from an even mention of Derev's name somewhere nearby.

[QUOTE=SHO_RULEZ;19236083]Punch off the break, punch after the bell, low blows, forearms...as long as the refs keep missing that, hell do okay :lol1:[/QUOTE] He never punched off the break. Referee didn't say break there and there were no clinch. Ref said…

He's very good, but Saturday showed he is just below the level of the legit champs. The only reason he won on 1 of the cards was due to Jacobs pretty much giving him the last 3 rounds. I'd like…

Of course he is an elite fighter. He proved that on Saturday night against Daniel Jacobs. He is definitely a force to be reckon with. Now I can understand why Team Golovkin decided to bypass him in favor of Vanes…