DiBella: Derevyanchenko Same Quality Of Foe For Jacobs As GGG

Sergiy Derevyanchenko’s promoter is as aware as anyone that his fighter hasn’t accomplished nearly as much as a professional prizefighter as Gennady Golovkin. DiBella is still convinced Derevyanchenko will give Daniel Jacobs every bit as tough a fight as Golovkin did in March 2017 when they meet for the vacant IBF middleweight title Saturday night.

Kazakhstan’s Golovkin knocked down Jacobs in the fourth round of their middleweight title fight. Jacobs recovered and gave Golovkin what to that point was his toughest professional fight. 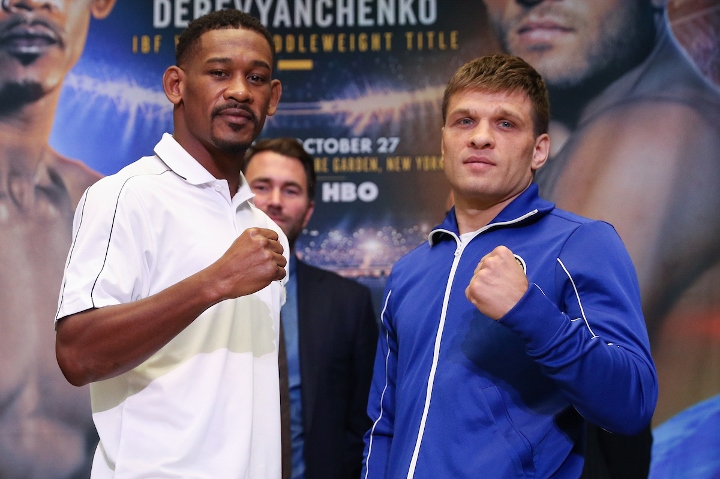 “Look, Sergiy was 390-20 as an amateur, fighting the best guys in world. Literally, his amateur credentials are among the greatest in the history of amateur boxing. That’s not an exaggeration. And he was fighting guys the caliber of Triple-G in the amateurs. He was one of the best fighters in the World Series of Boxing. And that is sort of a halfway point between pro and amateur.”

The 32-year-old Derevyanchenko had hoped to prove his prowess versus Golovkin himself, but Golovkin declined to make a mandatory IBF title defense against the unbeaten Ukrainian on May 5. Golovkin instead knocked out inactive junior middleweight Vanes Martirosyan in the second round that night at StubHub Center in Carson, California.

The IBF stripped Golovkin of its middleweight title a month later for failing to adhere to the stipulations of the exception it granted Golovkin to make that voluntary defense against Martirosyan. The IBF then ordered the top-ranked Derevyanchenko and the third-ranked Jacobs to fight for its unclaimed 160-pound championship.

“Look, everyone knows how hard of an opponent this guy is,” DiBella said of Derevyanchenko. “Tom Loeffler and Gennady made a very intelligent decision when they had that gazillion-dollar fight sitting there with Canelo. They weren’t gonna fight Derevyanchenko. It wasn’t a matter of timing. It was a matter of risk and degree of difficulty, with a huge payday ahead of you. Sergiy has been, for a long time, high-risk, low-reward for the biggest names in the division. He’s sitting here and he’s starving, literally. He needs to win this fight to change his life, to get to where Danny already is. Hunger is a tremendously powerful motivator.”

HBO will broadcast Jacobs-Derevyanchenko as the main event of a “World Championship Boxing” tripleheader from The Theater at Madison Square Garden (10 p.m. ET/PT).

I saw an interview with Jacobs and he said he will take this fight more seriously than his past two fights. That is good but a fighter should take every fight seriously. They simply don't learn when they fight down…

LOL, he is kidding right? Look, I favor euro fighters but let's be honest here... Derev is no GGG.... Jacobs cruises to easy victory here.

close fight, interested to see how it pans out. Jacobs going to need a stronger performance than his last two.

[QUOTE=Hatesrats;19221224]Pirog Flashbacks or nah??? [IMG]https://i.makeagif.com/media/1-09-2016/WKEvwy.gif[/IMG][/QUOTE] That Pirog KO was a thing of beauty, but it happened because Dmitry was so unorthodox and such an unknown quantity. Derevyanchenko is highly skilled, compact and quite fluid, but doesn't do anything Danny won't…

Man, I'm starting to worry about Sergei. I don't think dude's getting enough to eat.:lol1: