NEW YORK – Daniel Jacobs knows full well what he is getting into against Sergiy Derevyanchenko.

Jacobs estimated Thursday that he and his stablemate have sparred nearly 300 rounds against one another in recent years. Thus the former WBA world middleweight champion completely understands Derevyanchenko’s capabilities.

Lou DiBella, Derveyanchenko’s promoter, figures many boxing fans aren’t nearly as familiar with the unbeaten Ukrainian contender. DiBella promised them during a press conference in Manhattan that Derevyanchenko will give Jacobs the toughest fight of his career when they meet October 27 in The Theater at Madison Square Garden. 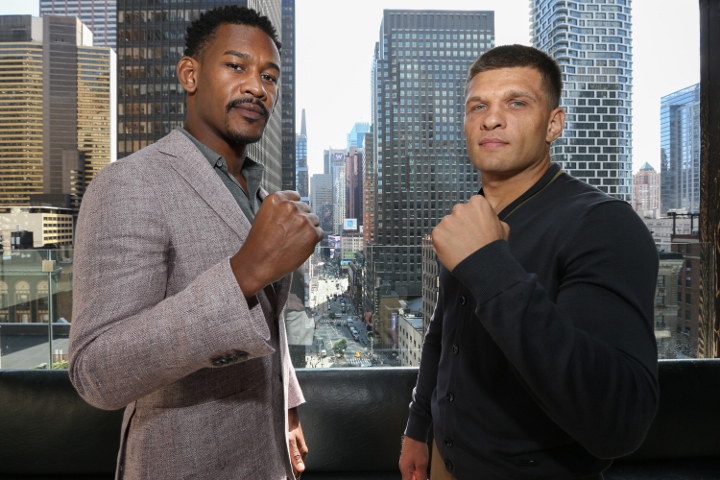 “You’re a great fighter when you have 400 amateur wins,” DiBella said of Derevyanchenko, who represented his country at the 2008 Summer Olympics in Beijing. “His amateur career, Sergiy’s, was every bit as outstanding as Triple-G’s amateur career was. He’s one of the great technicians in boxing. He knows how to adjust. He can pretty much do everything in the ring. Some people might be sleeping on it because they’re not familiar with him. But anyone who’s familiar with him knows that this very well could be the most difficult fight of Danny Jacobs’ career. I believe it’s going to be the most difficult fight of Danny Jacobs’ career.”

The 31-year-old Jacobs has suffered two defeats since making his pro debut in December 2007.

The Brooklyn native was stopped by Russia’s Dmitry Pirog in the fifth round of their fight for Pirog’s WBO middleweight title in July 2010. Jacobs (34-2, 29 KOs) also lost a close unanimous decision to Gennady Golovkin when they fought for Golovkin’s IBF, IBO, WBA and WBC middleweight crowns in March 2017.

DiBella is confident Derevyanchenko (12-0, 10 KOs) will deal Jacobs his third defeat when they meet for the vacant IBF middleweight title in a bout HBO will televise.

“Sergiy’s had to pay a lot of dues to get to this point,” DiBella said. “He’s been frustrated a lot, had to sit and wait, had to endure difficulty in supporting his family, as most fighters do when they’re not getting main events and they’re not champions. But his life is gonna change on October 27th at the Hulu Theater at Madison Square Garden.”

Not real familiar with Derevechenko. Only time I saw him fight was against Tureano Johnson. I do think the IBF rehydration second day weigh in could hurt Jacob's. Can't wait to watch, slowly clearing the 160 ?

Have a feeling DJ is gonna mop this boy up, make it look easy. DJ by tko in 6

[QUOTE=satiev1;19046095]Sergey needs to get a new trainer and not go with the assistant coach of rozier. If he does, he's in trouble.[/QUOTE] I disagree, the assistant coach (Gary Stark Sr) should be very familiar with Jacobs. maybe you think Stark…

Jacobs met a destructive end to Pirog, and GGG beat him. We are about to see Jacobs third loss to Old Eastern Block fighters?