NEW YORK – By the end of the second round Saturday night, Sergiy Derevyanchenko didn’t appear ready to give Gennadiy Golovkin what evolved into the fight of the middleweight champion’s life.

Down an additional point on the scorecards and suddenly bloodied, Derevyanchenko didn’t get discouraged. Instead, the daring Ukrainian contender fought back as hard as possible and pushed Golovkin to his physical and mental limits throughout the remaining 10 rounds. 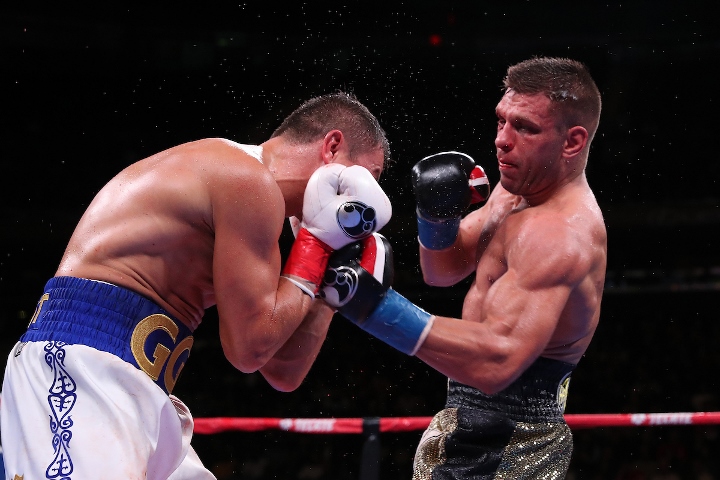 Golovkin defeated Derevyanchenko by unanimous decision, but Derevyanchenko definitely won over plenty of fans for fighting ferociously against one of the most dangerous boxers of this era. Promoter Lou DiBella commended his fighter’s courage after Derevyanchenko delivered an epic performance at Madison Square Garden.

Virtually every time Golovkin (40-1-1, 35 KOs) seemed to affect Derevyanchenko (13-2, 10 KOs) with punishing punches, a determined Derevyanchenko fired back with combinations that made Golovkin back off. Golovkin still won seven rounds on two of the three scorecards (115-112, 115-112, 114-113), but CompuBox credited Derevyanchenko for landing more overall and power punches against Golovkin than any previous opponent.

“I just looked at the CompuBox numbers,” DiBella said. “[Derevyanchenko] out-threw him in power shots unbelievably. He out-landed him in power shots by almost 50 percent more. And it was the most power shots ever, in any fight, landed on Triple-G, including Canelo. And he had him hurt.”

Keith Connolly, Derevyanchenko’s manager, is certain Derevyanchenko deserved what would’ve been by far the most noteworthy win of his five-year pro career. Even in defeat, Connolly commended his fighter for giving fans every reason to want to see him fight Golovkin again.

[QUOTE=Timur78;20114661]Anyway, good to see another Aussie on the forum! Judging from your cover photo, I think.[/QUOTE] No Aussie here. I was just a supporter of Katsidis back in the day. :D Although I [i]was[/i] an honorary Aussie when I went…

[QUOTE=PittyPat;20114342]I absolutely agree, especially the part in bold. When I said "just slugging it out", I meant it as props to Derevyanchenko's apparent lack of fear, but it likely came across as an oversimplification because many fighters use fear as…

[QUOTE=theface07;20108067]I'm a Golovkin fan but I was very aware of how much of a risk Derevyanchenko was. He's younger, fresher and his only loss came via a close decision against Jacobs who Golovkin won a close decision off so there…

[QUOTE=Timur78;20108961]I don't think it's as simple as you explain. Derev wasn't just slugging it out. He was very technical in his approach, and did things that other fighters could not implement against GGG. He always moved and never let GGG…