The veteran promoter is convinced Derevyanchenko did enough to win his grueling fight against Gennadiy Golovkin last October 5 at Madison Square Garden. DiBella doesn’t think Derevyanchenko deserved to lose his 12-round middleweight title fight to Daniel Jacobs, either.

“I never screamed robbery with his fights, but he could’ve won both of them,” DiBella told BoxingScene.com. “And he, at least in my mind, won one of them clearly. I’m concerned, particularly because of the way the judging has been lately, and how uneven it’s been in this pandemic. And then you have this promotion, which has been an A-side, Charlo promotion.

“I mean, you see the minute-and-a-half [promotional video] that Showtime’s got out there, it’s a piece on the Charlo brothers. The commercial I saw today on one of my cable channels was a Charlo brothers commercial. Like, you wouldn’t even think it’s two fights that are as good as these two fights are. And I’m really concerned about the wrong thing happening again.” 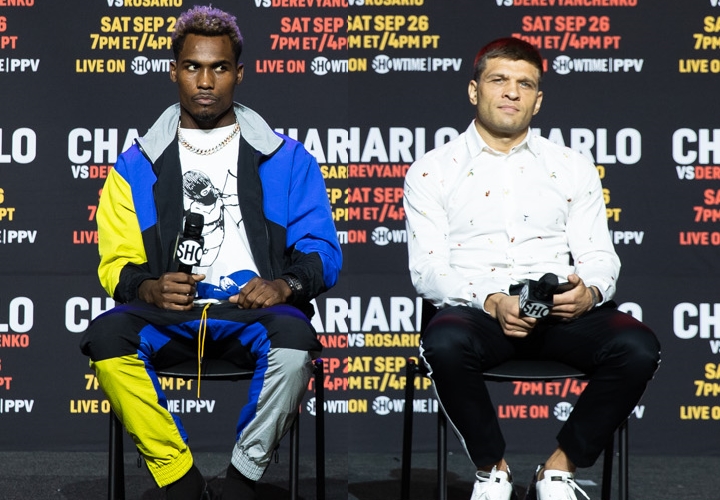 DiBella’s promotional contract with Derevyanchenko expired following his loss to Golovkin, but Derevyanchenko and his adviser, Keith Connolly, retained DiBella as part of his team for the Charlo fight.

The 34-year-old Derevyanchenko (13-2, 10 KOs) is a slight underdog against Houston’s Charlo (30-0, 22 KOs), who hasn’t encountered as accomplished or as rugged an opponent as Derevyanchenko since he moved up from the junior middleweight division 3½ years ago. DiBella believes Derevyanchenko is capable of stopping Charlo, yet he doesn’t think Derevyanchenko should feel that’s the only way he can win.

“Sergiy can stop people based on aggression, and he’s got some power, and he throws a sh-tload of punches,” DiBella said. “But he’s not Mike Tyson. I don’t want this kid to be in a situation that if he doesn’t knock the guy out the other guy wins. He’s already been victimized twice, and he deserves a fair shake. But I think the judging panel that they’ve announced is pretty good.”

“This whole thing is a setup for the Charlos to become some kind of a dual pay-per-view threat,” DiBella said. “But if Sergiy’s up all night a third time, believing that everything was set up against him, and he didn’t get a fair shake, in my mind, it’ll be horrible. I want the right guy to f--king win. But I know this is a super-competitive fight and either guy can win.”

Weisfeld is the only judge assigned to Charlo-Derevyanchenko who worked either the Golovkin-Derevyanchenko or Jacobs-Derevyanchenko bouts. He scored Jacobs a 115-112 winner of their October 2018 fight at Madison Square Garden’s Hulu Theater in New York.

“I scored Sergiy and Danny Jacobs a draw,” DiBella said. “And the only reason I scored it a draw was because of the knockdown [in the first round]. There was one round I really couldn’t score. I had Sergiy up 6-5 in rounds, so it was a draw on my card. So, then I thought to myself, he needs to pick this up against Golovkin. He did and really couldn’t have picked it up anymore. At the end of the fight, honestly, everybody in the ring, including Triple-G, knew that Sergiy got the better of him. I don’t care what ringside observers thought, because I was looking in Golovkin’s face.”

GGG know he lost that fight. It was 8 round to 4

There goes that arrogant, DiBella showing how much of a jerk he is. I'm surprised someone hasn't punched him in his big mouth. Derevyanchencko is a really good fighter, but he turned pro at an advanced age. DiBella should have…

Not going to happen. Judges will give all close rounds to Charlo, even if Derev is boxing his ears off. Derev can't knockout Charlo (too big, too strong) unless he's completely drained for this fight... So either way, Derev loses.…

Dibella wants to renew the contract BADLY. He complained about the promotion, like Charlo IS THE A SIDE, he is the champ and undefeated. He is fighting a guy coming off a loss. Also if you don't like fights going…

[QUOTE]“[B]I never screamed robbery with his fights[/B], but he could’ve won both of them,” DiBella told BoxingScene.com. “And [B]he, at least in my mind, won one of them clearly[/B].[/QUOTE] If this ain't a contradiction Idk what is.