Diaz vs. Rakhimov, Teixeira vs. Castano Finalized, February 13 on DAZN

A new era has begun in the career of Joseph “JoJo” Diaz (31-1, 15 KOs) as he makes the first defense of his IBF Junior Lightweight World Title against mandatory challenger Shavkatdzhon “Shere Khan” Rakhimov (15-0, 12 KOs) in a 12-round battle between two southpaws with highly decorated amateur backgrounds. The co-main event will also feature a classic battle between Brasil’s Patrick Teixeira, who will defend his WBO Junior Middleweight World Title, and Argentine mandatory challenger Brian “El Boxi” Castano.

The event will take place Saturday, Feb. 13 and will be streamed live exclusively on DAZN in more than 200 countries and territories, including the U.S., Mexico, Russia, Tajikistan, Brazil and Argentina.

Information regarding the venue and undercard will be announced shortly.

“After his participation in the Olympics and turning professional, Joseph had one goal: become a world champion,” said Oscar De La Hoya, Chairman and CEO of Golden Boy. “Everyone at Golden Boy Promotions was so proud when Joseph had his hand raised and realized his dream. Now that he’s got that belt, he’s not giving it back any time soon.” 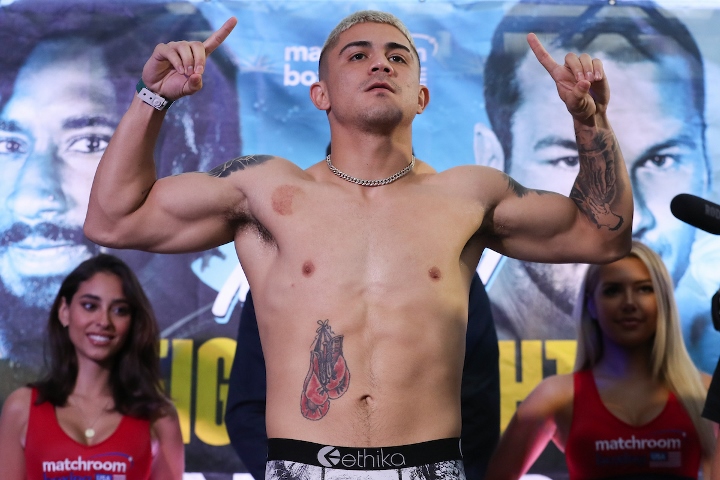 Diaz Jr. is a 28-year-old southpaw who represented the U.S. at the 2012 Olympic games in London. Immediately after, Diaz Jr. signed with Golden Boy and began a stellar career that has included fights against Gary Russell Jr., Andrew “El Chango” Cancio, Jesus Rojas, and Rafael "Big Bang" Rivera. In his last fight, the native of South El Monte, Calif. defeated Tevin “American Idol” Farmer to become the IBF Junior Lightweight Champion, which began a new phase of his career as he begins to take over the division.

“Shavkatdzhon Rakhimov is a very good fighter who is highly ranked throughout the world,” said Joseph Diaz Jr. “I know he’s been aching for a world title shot, but I’m ready to go out there and showcase that I’m willing to fight the best and defend my title with whoever wants to step in that ring with me. I’m the hungriest I’ve ever been, and there is nothing that he brings to the table that can affect me.”

“In my first main event on DAZN, I’m going to show to the world that I am the biggest threat at 130 pounds and a household name,” Diaz Jr. continued. “Not only am I doing this for myself, but I’m also doing this for my family. I fight to motivate people to keep on pushing and continue pursuing the dreams they have through the ups and downs in life. That’s my purpose. Come Feb. 13, I’m going to shine. It’s my time!”

Rakhimov is a 26-year-old puncher who earned gold medals in some of the world’s most prestigious international amateur tournaments. In 2015, the native of Qurghonteppa, Tajikistan made his professional debut, and in only his 11th fight as a professional, he captured the IBO Super Featherweight Title by scoring a sixth-round technical knockout over Emanuel Lopez. He defended the title three times, and one of those victories was against experienced contender Robinson “Robin Hood” Castellanos. Though no longer holding the IBO belt, he remains undefeated as he looks to capture a belt from one of the four recognized sanctioning bodies.

“I’ve been waiting for this chance for a long time,” Shavkatdzhon Rakhimov. “Thank you for this opportunity to my team. My training camp is long one but very good. I will do my best to win this fight. I came here for the victory!”

In the co-main event, Patrick Teixeira (31-1, 22 KOs) of Sau Paulo, Brazil will make the first defense of his WBO Super Junior Middleweight World Title against undefeated challenger Brian “El Boxi” Castaño (16-0-1, 12 KOs) of Buenos Aires, Argentina in a 12-round battle.

“I am very confident about this fight against Brian Castaño,” said Patrick Teixeira. “I am ready to defeat him and keep my title. The fight will be a war. It will be a bit show for all the boxing fans.”

finally! both fights are long overdue.