Devin Haney: I Want Lomachenko Fight, So Does He - But Not His Team

Although Devin Haney and Vasiliy Lomachenko both have unfinished business ahead of them by way of separate opponents, the 21-year-old Haney is still looking forward to testing himself against one of the sport’s pound-for-pound greats.

In response to an advance Haney made on social media, the WBA, WBO and WBC Franchise lightweight crownholder Lomachenko wrote: “Contact my manager [Egis Klimas]. He will help you. I need you all, but in turn.”

Lomachenko replied, "I will keep it in mind!"

Haney (24-0, 15 KOs) went on to further elaborate with Zittel on his exchange with the two-time Ukrainian Olympics gold medalist Lomachenko (14-1, 10 KOs).

“I think honestly that Loma wants the fight, but I think his team doesn’t think it’s in his best interest. I think Loma is a true champion. He showed that he’s willing to face the best, but I don’t think that his team [wants it],” said Haney. “I don’t want to say the wrong thing [to mess up the Lomachenko fight], and then the fight doesn’t happen. I say one thing, and then they say the opposite. I’ll do anything to make the fight happen.” 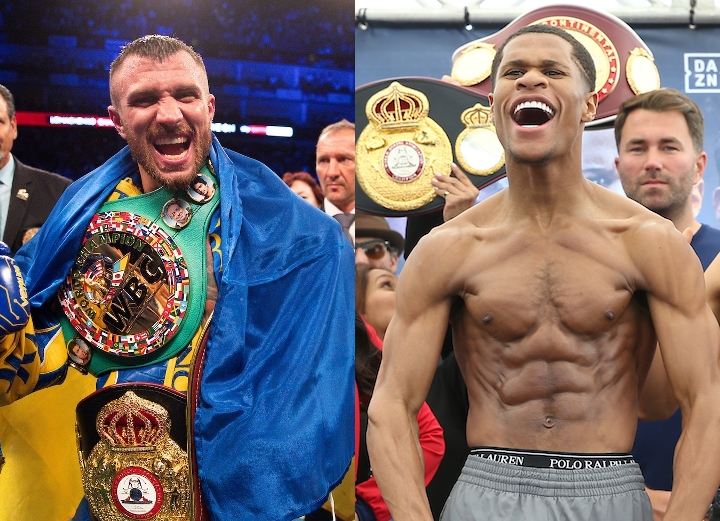 Haney then quickly switched gears to another potential future foe in Gervonta Davis, and the sentiment he shared can be applied to Lomachenko, Teofimo Lopez, Ryan Garcia and every other 135 pounder calling each other out in recent months.

Haney and Lomachenko having cordial exchanges is a welcome development.

In April, Haney got himself in a bit of hot water commenting on a potential Lomachenko fight, saying: "I can tell you this — I will never lose to a white boy in my life. I don't care what nobody got to say. Listen, can't no white boy beat me, I don't care, on any day of the week. I fight a white boy like 10 times, I'm gonna beat him 10 times."

"I’m not racist and I never will be a racist. I’m chasing greatness," Haney said at the time. "I just had a very positive conversation with Mauricio Sulaiman, President of the WBC and confirmed to him directly my commitment to be a role model and my absolute rejection of discrimination of any kind!"

Haney is not losing focus for his next fight at hand, which comes against Yuriorkis Gamboa (30-3, 18 KOs) on Nov. 7 at the Seminole Hard Rock Hotel and Casino in Hollywood, Florida on DAZN.

Haney said Gamboa will be the toughest test of his five-year pro career.

“I’ve got Gamboa ahead of me, but after that fight, I’d like to make [the match with Lomachenko] that fight or any other fight that’s possible. My focus is on Gamboa. I can’t look past him,” said Haney. “I know [Gamboa] is going to come to fight and bring his all, and I’m going to go in there and showcase my skills. I’m going to show the world I am the best lightweight. No one beats Gamboa like I will.”

[QUOTE=revelated;20817490]All Teo has to do is win. It's all over the marketing. I have no idea what 135 is going to look like after this. At some point champions won't matter anymore.[/QUOTE] Right. If you gotta get permission to win…

[QUOTE=JimRaynor;20817621]Lomachenko has a loooooong way to go before we can even begin comparing him to Mayweather.[/QUOTE] I don't think you're one of the people with double standards that I mentioned.

[QUOTE=ShoulderRoll;20816509]Wrong. Check my posting history, you'll never see me backtracking about giving credit to someone if they fight someone I called for them to fight. It will be the same if Lomachenko beats Teofimo. Full credit will be given. I'm…

[QUOTE=Motorcity Cobra;20817205]Did Teo have to petition the WBA and WBO to become champion if he beats Lomachenko tonight or does all he have to do is beat him?[/QUOTE] All Teo has to do is win. It's all over the marketing.…

[QUOTE=revelated;20816462]Sulaiman is on record in the past saying that the Franchise Championship is not a "defended title". You can't unify a title that isn't defended. No, Mauricio is trying to pull a fast one because of the fiasco with the…