You’ll have to pardon Devin Haney for acting as if he’s heard this song before.

The unbeaten lightweight contender patiently sat and listened as Russia’s Zaur Abdullaev (11-0, 7KOs) and his team vowed to shock the world this weekend. The two will collide Friday evening at Madison Square Garden’s Hulu Theater in New York City, with an interim title at stake in the DAZN-streamed headliner.

Abdullaev’s handlers went as far as to draw a historical parallel as to the last time an unbeaten but unheralded Russian product was in a similar position and went on to pull off the upset. Dmitry Pirog entered his July 2010 vacant middleweight title fight versus then-unbeaten and highly touted Daniel Jacobs as a considerable underdog. He emerged victorious in a 5th round knockout of a competitive fight, going on to defend the title three times before retiring in 2012 due to health issues. 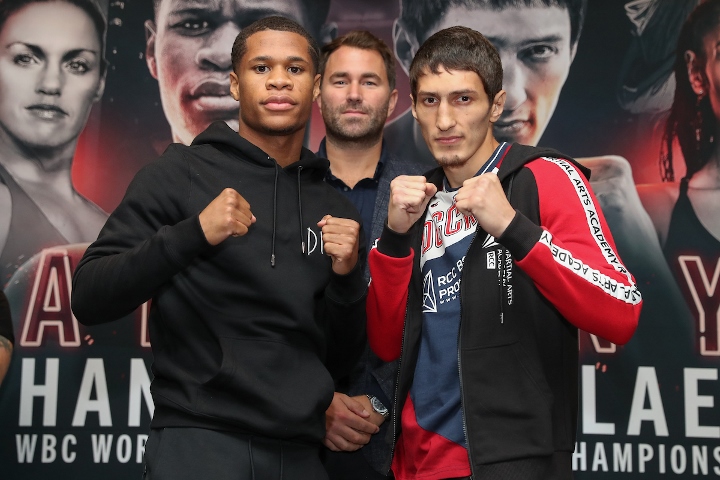 As it relates to this weekend’s unbeaten American title hopeful, he wasn’t quite as impressed.

“This is a totally different (time),” Haney (22-0, 14KOs) said in response to the story shared by Alex Titov Jr. of RCC Boxing Promotions, Abdullaev’s promoter. “No disrespect to Danny Jacobs—who is a great fighter—but I’m a totally different monster than whatever happened five years or however long ago it was.”

Haney has blitzed past the prospect stage to full-blown title contender. He was prepared to challenge for the vacant World Boxing Council (WBC) lightweight belt versus England’s Luke Campbell—a 2012 Olympic Gold medalist—only to be passed over for unified titlist Vasiliy Lomachenko who petitioned the sanctioning body for an exception. Lomachenko was granted the fight, claiming a 12-round decision to become a three-belt lightweight titlist.

Instead, the 20-year young rising contender settles for an interim title fight and—with a win—a mandatory challenger to the ultra-talented Ukrainian southpaw.

“I know Zaur Abdullaev is going to come, he’s going to bring a great fight and bring his all,” acknowledges Haney, though more as self-motivation than any concern of not being prepared for this or any other moment. “I’m going to put on a great fight and show everyone I’m ready for the big dogs.”

[QUOTE=Boxing Goat;20053497]There you go, fight your way up son. Don't even think about Loma yet. You need at least one decent win to even speak his name.[/QUOTE] Too late, he spoke his name & even called him out multiple times.

[QUOTE=lieutenant;20053473]Eddie Hearn needs to do his job and protect this kid from himself, he'd be wise to keep him far away from Lomachenko this year or next.[/QUOTE] Bullshet, he whoops l0m0 this year or next.

[QUOTE=skinnystev;20053434]the compulsive gum chewing haney was doing during the face off betrays a high degree of nervousness this is his 1st fight on the big stage i doubt if he is ready[/QUOTE] You mad cuz he chewing gum like he…