The unbeaten WBC world lightweight champion is a heavy favorite to beat Gamboa, as was Davis. Haney isn’t overlooking his 38-year-old opponent, though, which is why Haney thinks the younger, stronger Davis didn’t look as good as expected against Gamboa.

“He definitely underestimated Gamboa,” Haney told BoxingScene.com. “Once he didn’t knock Gamboa out early in the fight, he didn’t know what to do. It’s like everyone underestimates Gamboa. They forget how much experience and talent he has, and how much he has accomplished.” 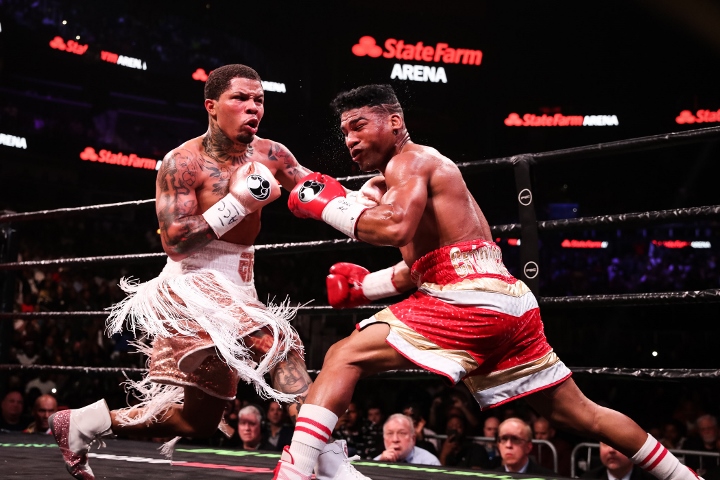 Baltimore’s Davis dropped Gamboa three times, once apiece in the second, eighth and 12th rounds. The powerful southpaw stopped Gamboa following that third knockdown, 1:17 into the final round December 28 at State Farm Arena in Atlanta.

Gamboa provided medical documentation afterward on social media that confirmed he completely tore his right Achilles tendon in the second round versus Davis, who won the then-vacant WBA world lightweight title by beating Gamboa.

“Gamboa showed a lot of heart,” Haney said of his loss to Davis. “He showed how tough he is and how he can come back from adversity.”

Gamboa’s toughness notwithstanding, Haney hopes he can knock out Gamboa faster than Davis was able to end their fight.

“It would be a statement,” Haney said. “It would show how much of a force that I am. But it’s about going in there, still being smart and not taking punches, trying to get him out of there. If it is a knockout, I want a pretty knockout. I want it to be well set up.”

The 21-year-old Haney (24-0, 15 KOs) will make his second defense of the WBC world 135-pound crown when he battles Cuba’s Gamboa (30-3, 18 KOs). Their 12-rounder will be the main event of a card DAZN will stream a week from Saturday night from Seminole Hard Rock Hotel & Casino in Hollywood, Florida.

Odds-makers have established Las Vegas’ Haney as a 20-1 favorite over Gamboa, but Haney considers the former three-division champion the most imposing opponent he has agreed to face in nearly five years as a pro.

“I think he’s the toughest opponent and he has more talent than all the guys that I’ve fought,” Haney said. “That’s why this fight means so much, because this is a huge step up for me. No one I’ve fought has accomplished nowhere near what Gamboa has accomplished, or has as much skill or talent as Gamboa.”

[QUOTE=Oldskoolg;20841731]So we are criticising Davis because he didn’t get him out sooner? I recall him knocking him down multiple times and forcing a stoppage late?[/QUOTE] Right!!! Even Robert Garcia was saying it was a bad performance because he should've KOd…

What? He dropped him 3 or 4 times and stopped him. Wth

[QUOTE=shaheed1972;20843287]I don't think anyone is hating on Leo. I think people don't like the fight and think Tank is fighting a smaller fighter.[/QUOTE]Oh trust, there was a lot of hate on here for LSC, just like there was for Mikey…

[QUOTE=Bronx2245;20841845]I have a lot of respect for LSC, just like I do for Mikey Garcia! I can't understand why people are hating on him for challenging Tank? Isn't that what we want fighters to do? The only thing I thought…

[QUOTE=Doubledagger;20843257]You make it sound like the fight isn’t at 130lbs. You realise that it is in fact at 130lbs right? Ps. I agree that Santa Cruz deserves a massive amount of respect for taking this fight just like Garcia did.…