Devin Haney To Fight Oct. 3 Against Either Gamboa, Fortuna In U.S.

Matchroom Boxing head Eddie Hearn is zeroing in on Devin Haney’s next encounter in the ring.

“He’s fighting on Oct. 3 in the U.S.,” Hearn told IFL. “We’re talking about Yuriorkis Gamboa and Javier Fortuna. [Fortuna] fell out of a fight with Linares, so he’s an option as well … One of those guys is most likely for Devin Haney for Oct. 3. Devin Haney is in the position where he wants the big tests and the big fights.”

The 21-year-old Haney (24-0, 15 KOs) had a busy 2019, finishing 4-0 and picking up the WBC lightweight title via email along the way. The 135-pound can't-miss prospect easily moved past the likes of Xolisani Ndongeni, Antonio Moran, Zaur Abdullaev and Alfredo Santiago. 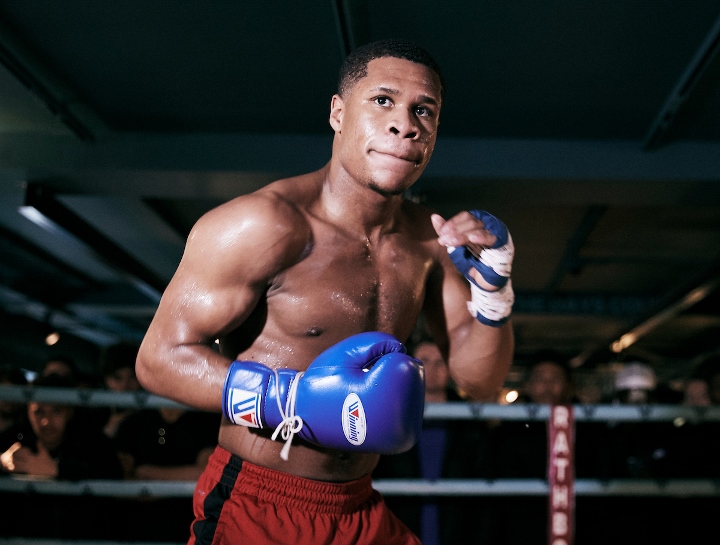 In the fight against Santiago in November, which ended in a one-sided decision win, Haney suffered a shoulder injury that sidelined him. Then the coronavirus stalled the sport, which further kept Haney on the sidelines.

“He’s coming off of a year layoff with a shoulder operation,” said Hearn. “So normally you take an easier fight, but that doesn’t exist right now. He’s got his head around that, and he said, ‘Do you know what? Give me a real fight,’ and Fortuna and Gamboa are a real fight for Devin. So we’ll have to see.”

Hearn targeting Fortuna (35-2-1, 24 KOs) as a potential next foe is an ambitious endeavor considering Fortuna is still on track to fight Aug. 28 despite Linares pulling out of the originally scheduled fight due to contracting coronavirus.

The five-week turnaround may be impossible for Fortuna if he still ends up fighting, which for the time being is likely against Hector Tanajara.

The 38-year-old Gamboa (30-3, 18 KOs) has been idle since suffering a 12th round TKO and Achilles injury against Gervonta Davis in December.

One challenge or another, Haney will soon re-enter the stacked lightweight picture.

[QUOTE=UNBANNED;20707974]I brought him up. Morales, Barrera, DLH, Hatton, Mosley, Cotto, Margarito, Rios, Matthyse, and Thurman. Pretty much everyone Manny is "famous" for beating was coming off consecutive losses or poor performances, injuries, long layoffs, catchweights, and/or new trainers...basically when things…

[QUOTE=PBR Streetgang;20705706]Who is talking about Pacquiao? Why even bring him up?[/QUOTE] I brought him up. Morales, Barrera, DLH, Hatton, Mosley, Cotto, Margarito, Rios, Matthyse, and Thurman. Pretty much everyone Manny is "famous" for beating was coming off consecutive losses or…

[QUOTE=UNBANNED;20705518]Sounds like 80% of Pac's resume and some posters on here think Manny is Top 10 ever. Going by that recipe Loma and Ryan Garcia should fight Gamboa next[/QUOTE] Who is talking about Pacquiao? Why even bring him up?

[QUOTE=revelated;20704499]He demanded Loma, right to his promoter's face, on live stream. This isn't like Crawford where he ducks fights on live streams.[/QUOTE] Crawford has literally never ducked a single fight in his entire career. Of note is how 35 year…