HOLLYWOOD, Fla.—Devin Haney has returned, though whether he has truly arrived is all in the eye of the beholder.

The unbeaten lightweight titlist made his second successful defense in a 12-round unanimous decision victory over Miami’s Yuriorkis Gamboa in their DAZN-streamed main event Saturday evening at Seminole Hard Rock Hotel & Casino in Hollywood, Florida.

Judge Fernando Barbosa scored the bout 118-109, while judges Michael Tate and Michael Ross had Haney pitching a shutout at 120-107 apiece.

As for the statement that Haney wanted to make?

“I wanted to show that I can pitch a shutout,” Haney told BoxingScene.com after the win. “I didn’t get hit with anything big. Gamboa has managed to hurt a lot of his past opponents, especially a lot of big names. He didn’t hurt me once or hit me with anything big and that’s a statement within itself.”

Both boxers were entering the ring off of long layoffs and having suffered significant injuries in their previous outings. Haney was fighting for the first time in 52 weeks, spending a significant portion of the downtime recovering from shoulder surgery following a 12-round win over unbeaten Alfredo Santiago last November. Gamboa suffered an Achilles tear and three knockdowns in a 12th round stoppage loss to Gervonta Davis last December in Atlanta.

With that came a feeling out opening round, largely controlled by Haney’s jab. Gamboa poked with his left, hoping to catch Haney with counter right hands but never quite accomplishing that goal in the opening frame. Haney continued to shoot the stick in round two, bringing it downstairs and then coming back up top while Gamboa moved deliberately around the ring.

“Everything felt great, being back in there after being out so long,” revealed Haney. “I felt really good in there and am just ready to get back in the ring as soon as possible.” 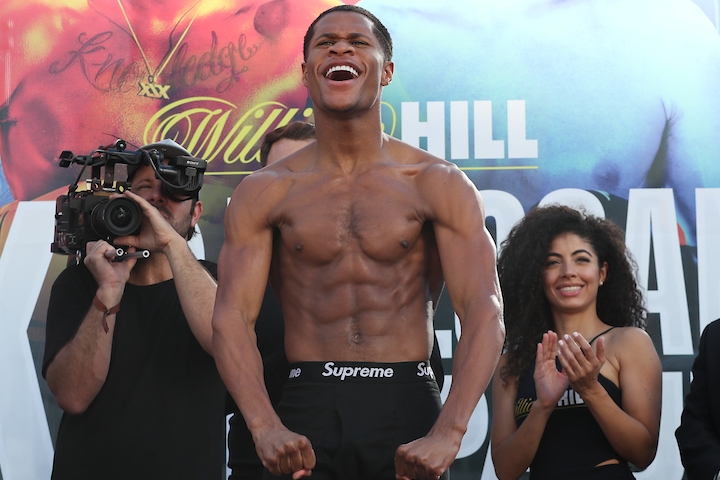 Gamboa opened up his offense early in round three, flicking a jab and firing a right hand directly behind it. Haney took the shot well and quickly resumed control of the action after a brief clinch. The defending titlist connected with a right hand later in the frame, followed by a right and a left hook downstairs.

Haney picked it up a notch in round four, with Gamboa struggling to keep pace. Haney connected with several right hands, also landing a body shot which clearly caught the attention of the Cuban veteran. An ensuing attack by Haney resulted in a clinch, with Gamboa emphatically warned by referee Telis Assimenios for hitting on the break after trying to sneak in a left hand.

Gamboa enjoyed moments of success in round five, finding a home for his right hand when he wasn’t defending against Haney’s long jab. Haney’s speed and combinations remained a sore spot for Gamboa, though attempting to extract any momentum from the frame into round six. It came in spots, as Gamboa scored with an occasional right hand while Haney mixed it up with jabs upstairs and to the body when the two weren’t entangled in clinches.

Haney found himself in a fight as they ventured into the second half. Gamboa’s confidence continued to grow, making things uncomfortable for Haney on the inside as he would smother the 21-year old titlist following right hands. Gamboa was warned for the infraction, while Haney did his best to maintain his composure and concentrate on the skills that have kept him unbeaten.

Round nine saw Haney return to controlling the action with his jab, while Gamboa was more interested in tying up on the inside than continuing to engage in two-way action. The same strategy produced by the 38-year old drew a final warning from the referee for frequent clinching in round ten, which saw Haney connect with a leaping left hook along with a clean right hand later in the frame.

Haney found a way to pick up his attack in the championship rounds, punching when his hands were free while Gamboa was content to simply go the distance. More clinching by the former featherweight titlist resulted in a long overdue point deduction, only further increasing Haney’s already sizeable lead.

“I was just praying he would stop stinking the show out,” Bill Haney, Devin’s father and head trainer told BoxingScene.com. “Devin was prepared for Gamboa throwing those wild shots and taking chances, but it’s kind of hard to hurt an opponent that’s not willing to engage.”

With the fight well out of reach, Haney fought with a relaxed yet active tone in the 12th and final round. Very little offense came from Gamboa, who was forced to defend against incoming right hands to the body and left hooks from Haney who closed the show to the best of his ability.

Haney rolls to 25-0 (15KOs) with the win, while Gamboa suffers his second straight defeat in falling to 30-4 (18KOs). The loss marks his third failed attempt at a lightweight strap.

Gamboa stormed out of the ring after the fight and refused to speak to the media.

As for Haney, the questions being asked in boxing circles are whether he should have done more to send a message to the rest of the red-hot lightweight division.

His win comes one week after Davis scored a highlight reel 6th round knockout of Leo Santa Cruz on Halloween in San Antonio. Two weeks prior, Teofimo Lopez became the lineal lightweight champion along with unifying three belts in a 12-round win over pound-for-pound entrant and now-former three division titlist Vasiliy Lomachenko.

Understandably, the expectation was for Haney to follow suit or perhaps surpass that of what was accomplished against Gamboa by Davis, and Terence Crawford well before him.

Crawford stopped Gamboa in the 9th round of their entertaining June 2014 title fight, though enduring some rough moments early before becoming the first to beat the former featherweight titlist.

“They always gonna say something,” notes Haney, who outlanded Gamboa 133-to-84 and at a much higher connect percentage (33.2% to 17.8%). “It comes with the territory. If you knock him out in the 1st round they say you fought a nobody. If you go in there and pitch a 12-round shutout like I did, they say you should have knocked him out.

“They’re always gonna say something regardless. I just want to keep growing, keep getting better and make the big fights happen. I want a big fight next.”

The one he has in mind couldn’t be bigger—even more so than the one he wanted a year ago.

Haney became a lightweight titlist primarily due to then-unified WBC/WBA/WBO champ Vasiliy Lomachenko deciding to move in a different direction in lieu of honoring his WBC mandatory agreement.

That is no longer of concern, since the Ukrainian southpaw has since been dethroned—with his conqueror now the primary target.

“Teofimo Lopez,” Haney emphatically stated of his next desired target. “I want all of the belts. Teofimo has them. That’s the fight that I want. I’m chasing belts.”