Four months after turning heads in his DAZN debut, Devin Haney turned a corner in his latest outing.

In the span of a year, the 20-year old lightweight from Las Vegas has advanced from prospect to contender to interim titlist. The latter status came courtesy of a one-sided stoppage win over Russia’s Zaur Abdullaev after four rounds in their DAZN-streamed headliner Friday evening at Madison Square Garden’s Hulu Theater in New York City.

Haney’s two-fisted attack resulted in Abdullaev suffering a busted nose and fractured cheekbone, prompting a corner stoppage prior to the start of round five.

“I felt good on my performance,” Haney noted after his latest win, which also netted him the interim World Boxing Council (WBC) lightweight title. “I wasn’t nearly done beating him, I was just warming up. I’m happy with the win.”

Haney emphatically announced his arrival on the contender stage following a one-punch 7th round knockout of Mexico’s Antonio Moran this past May. The bout was his first on the sports streaming platform, which he is now regularly showcased through a co-promotional pact with Eddie Hearn’s Matchroom Boxing USA outfit.

The second fight under that deal put him in line to one day challenge three-belt lightweight titlist and pound-for-pound entrant Vasiliy Lomachenko. He arrived there by picking apart Abdullaev (11-1, 7KOs), who was fighting in the United States for the first time in his young career.

“Abdullaev was number two and I destroyed him,” stated Haney, not at all overselling his performance, however brief was the affair.

Whether not ready for the moment or simply not—or never—ready for Haney, the visiting 25-year old struggled to force his foe to ever break stride. Abdullaev’s biggest win to date came last September, outpointing former title challenger Hank Lundy to become a lightweight contender.

He didn’t at all look the part versus Haney, who controlled the action with a sharp jab and looping right hand. It was the weapon of choice from the opening bell and remained a constant nuisance throughout the night.

Abdullaev never managed to make an impact in a fight he demanded take place. He was given the chance to step aside when Haney hoped to face England’s Luke Campbell for the title that Mikey Garcia vacated earlier this year. Due to Abdullaev—who was rated higher than Haney in the WBC—refusing to step aside, Campbell wound up fighting Lomachenko who petitioned the sanctioning body to jump the line. 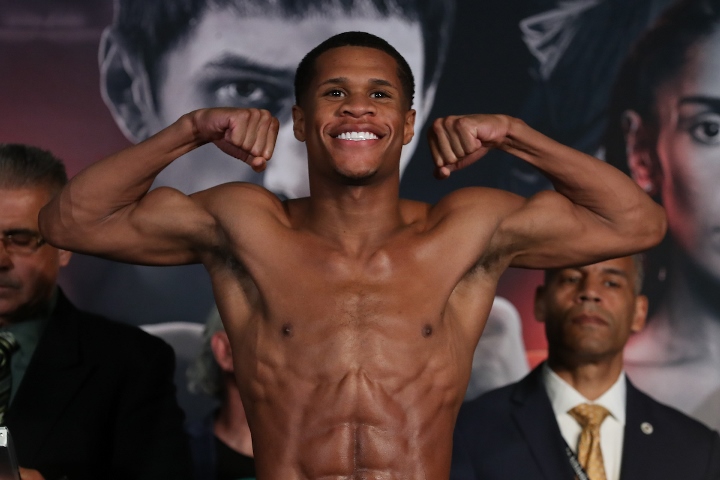 That led to Friday’s fight, which turned out to be another showcase for Haney even if he couldn’t unload his entire arsenal. He delivered enough to make it as uncomfortable as possible for his determined but overmatched foe. By round four, Abdullaev was busted up to the point of blood pouring from his nose and dripping down to his legs.

The ringside physician gave the Russian boxer a long hard look between rounds, as did referee Charlie Fitch who was instructed to stop the contest.

The official time was 3:00 of round four.

Haney storms to 23-0 (15KOs) with the win, already his third of 2019. He could add one more to his campaign, as there are designs on placing him on the undercard of the Nov. 9 rematch between YouTube celebrities Logan Paul and KSI live on DAZN from Staples Center in Los Angeles, Calif.

“I’ve been talking to my promoter about Nov. 9,” Haney confirmed of the recent rumors surrounding his involvement on the card, which will be announced Saturday. “I think it’s good for the sport of boxing, brings new fans, and gets me back in the ring.”

It also keeps him active for the one fight he truly craves.

Somewhere down the road will come a title shot, whether versus Lomachennko or whomever holds the title by the time it’s his turn in line.

Whether or not Lomachenko is as eager remains to be seen. Haney isn’t holding his breath.

“It’s No-machenko because he doesn’t want to fight me,” insists the rising star, who will celebrate his 21st birthday shortly after his next proposed fight in November. “Lomachenko let’s get this fight going! If I’m so easy, No-machenko should fight me and get me out of the way.”