Devin Haney Brutally Knocks Out Antonio Moran With One Shot

When opportunity knocks for a young fighter, an adamant knockout is as good an answer as there is. 20-year old lightweight hopeful Devin Haney (22-0, 14 KO) wasn’t originally slated for the main event at the MGM National Harbor on Saturday night in Oxon Hill, Maryland. When cruiserweight king Oleksandr Usyk’s heavyweight debut was postponed, Haney was elevated to headliner.

He responded with arguably the best performance of his career to date.

Haney, 134 ¾, of Las Vegas, Nevada, scored a knockdown in the fifth and one-shot knockout in round seven of 26-year old Antonio Moran (24-4, 17 KO), 134, of Mexico City, Mexico to inch towards a title shot in the intriguing lightweight division.

The referee was Kenny Chevalier.

Haney made the first statement of the fight with a crisp right hand. Then Haney repeated himself to the body and head as the round progressed, mixing in some quick counter left hooks. By the end of the third round, Haney was loading up with home run shots to test for a possible early exit. 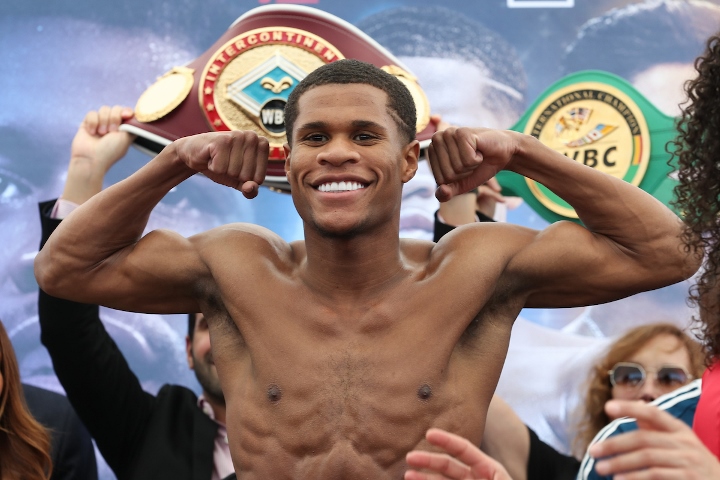 Unsuccessful in the attempt, Haney resumed controlling the action with superior footwork, reflexes, and punching accuracy. In round five, a tangle of feet and a harsh right to the body sent Moran to the deck. Moran beat the count and protested he’d been tripped to no avail. Haney spent the rest of the round battering Moran.

The courageous Moran took every shot without give, still punching, still trying to change his fortune. By the sixth round, the punishment he’d absorbed left little zip on Moran’s shots while Haney fought like he’d just broken a sweat.

In the seventh round, Haney broke through with a highlight reel finish. Backing Moran into the ropes, Haney dropped an echoing right hand bomb over the top, Moran senseless on contact as he melted into the canvas. The referee jumped in immediately and Moran remained on the mat for several minutes.

It was Moran’s first knockout loss.

Haney entered the ring Saturday rated in the top ten by all four of the major sanctioning bodies, including #4 ratings from both the WBC and WBA. The WBA and WBO lightweight titlist is Vasyl Lomachenko and Lomachenko will fight for the vacant WBC belt against Luke Campbell in August.

Speaking at ringside after the fight, Haney said the pressure of moving into the main event was extra motivation. “They bumped me up to the headline and I didn’t want to disappoint them. I wanted (Matchroom) to know they made the right choice.”

Promoter Eddie Hearn of Matchroom was anything but disappointed and hoped American fans get behind Haney. “It was unbelievable,” Hearn said. “Where I come from in England, if we had a star like this, the country would be going mad. So you guys need to get behind Devin Haney because let me tell you, America has a superstar on their hands. He is 20 years old. He is 22-0. They say he doesn’t carry power but he is taking guys out like that. (Former two-division titlist) Jose Pedraza struggled against (Moran), a champion who went the distance with Lomachenko. That was like watching an artist draw a beautiful picture and then at the end just sign his name off and walk away into the night.”

Concerning the ratings and a possible challenge of Lomachenko, Haney said, “Yeah, I definitely feel like I’m ready for Lomachenko now. My team wants me to slow down. They say I’m on the fast track.”

If he is to challenge, it may have to come sooner than later. There were whispers the cut to lightweight was difficult for this fight and, asked about how long he can continue to compete at lightweight, Haney stated, “Not much longer. My body is maturing as everyone saw I was ripped at the weigh-in. It wasn’t easy to make but I sacrificed and I made the weight but not much longer can I make the weight.”

Whatever weight he ultimately settles at, Devin Haney looks like a promising part of boxing’s future.

The bout was streamed in the US on DAZN, promoted by Matchroom Boxing.

[QUOTE=CauliflowerEars;19831713]I like when you guys post these looping GIFS with the slowmo. You get to break down that action in detail. That bottom clip shows so clearly how the KO was set up by the body shot. Moran didn't want…

Bout to watch it back

Haney's gonna be a monster one day.

[QUOTE=CauliflowerEars;19772099]Looks like your girl took care of business but had to pack a lunch. :blackeye: I imagine you'll be looking out for a Taylor rematch or maybe even Sanchez ?[/QUOTE] I wanna see the Sanchez rematch!!! Honestly I had Sanchez…