Deshon Webster, Samuel Clarkson Fight To Draw In Front of Fans In Biloxi

The Gulf Coast has ushered in a new era of boxing in the current global health crisis.

The first sporting event with fans in attendance during the ongoing coronavirus pandemic took place in front of a social-distanced crowd Saturday evening at Mississippi Coast Convention Center in Biloxi, Mississippi. What failed to come of the event, however, was a winner in its headlining act as Samuel Clarkson and Deshon Webster fought to a 10-round draw.

Judge Wayne Spinola had Clarkson winning 96-94, but was overruled by matching scores of 95-95 turned in by judges Bill Clancy and John Dixon in the CBS Sports Network-aired main event, in a fight with something called the World Boxing League cruiserweight title at stake. 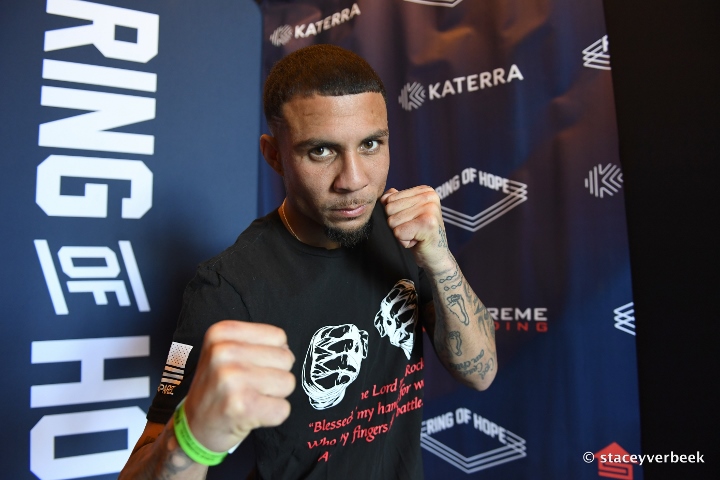 An estimated 1,000 fans were in attendance in the Gulf Coast casino, most of whom were in the stands as spectators in floor seats were well spread out and wearing masks in accordance with current social distancing and health guidelines.

Clarkson served as the aggressor early in the fight, though not always effective. Webster offered constant in and out movement, flicking his jab and using nearly every inch of the ring. Clarkson—best known for a knockout loss to Dmitry Bivol in April 2017 and a courtroom win over former promoter Greg Cohen—constantly moved forward, landing his right hook when he was able to cut off the ring and control the action.

Webster spent most of round four circling to his left, potshottng with jab and following up with right hand shots. Clarkson was landing the heavier blows but mostly one at a time.

Clarkson scored with a right hook late in round five, the best punch of the fight to that point. Webster took the shot well, though stopping him in his tracks for the first time on the night.

Webster went back to boxing on the outside in rounds six and seven. Clarkson followed him around, failing to close the gap as his offense remained limited to one shot at a time. Webster landed his best punch of the fight, catching Clarkson with a left hook and immediately moving out of harm’s way before his opponent had a chance to counter.

Clarkson figured out how to stick and move in round eight, scoring with the more telling blows in the process. Webster connected with a right hand, but was clipped with a pair of left hooks in the second half of the frame. Clarkson was able to connect and then slip the incoming.

With the fight potentially in the balance, Clarkson surged ahead with a powerpunching round nine. Webster overshot with a right hand, which Clarkson managed to slip and pirouette into position to initiate his attack. Right hooks by the Texan had Webster visibly hurt for the first time in the fight, fending off the force of the blows as well as growing fatigue.

Clarkson closed the show in the 10th and final round. The southpaw missed with an uppercut but connected with a left hand which forced Webster to retreat. Webster spent most of the final 90 seconds of the bout racing around the ring while eyeing the running clock, breathing heavy and no longer throwing in combination.

As it turned out, it merely cost Webster a victory but didn’t result in his second straight defeat. Instead, the Kansas City-based cruiserweight remains winless in his past four starts, including three draws over that stretch as his record now moves to 12-3-3 (6KOs).

Saturday’s show marked the first boxing event in the United States with fans in attendance since early March.

I thought Clarkson won it. More aggressive and the other guy dud t land many hard shots. Clarkson should drop back down to 175

This is sweet, finally fans in attendance in a boxing event. :boxing: