Sergiy Derevyanchenko has come so close to winning a middleweight title twice that if he makes good on his third attempt against WBC champion Jermall Charlo on September 26, it might get a little emotional in the ring at the Mohegan Sun Casino for the Ukrainian and his team.

And that’s fine, but he did get a warning from trainer Andre Rozier about it getting too emotional.

“My coach said to me, you can do everything when you win this belt, just don’t cry,” said Derevyanchenko, his wife Iryna by his side to aid with any needed translations.

I tell him a little crying wouldn’t be bad.

A couple weeks out from the next biggest fight of his career, Derevyanchenko is calm, cool and collected. Then again, that’s the default mode for the 34-year-old, who has been down this road before. So many times that he’s probably lost count.

For starters, over 400 amateur bouts is the conservative estimate, then there’s the pro career, not as impressive in numbers with 15 fights, but in quality, Derevyanchenko has made his mark, losing only to Danny Jacobs by split decision in 2018 and Gennadiy Golovkin via unanimous decision last October.

Some could make a case for Derevyanchenko winning the Jacobs bout, but a lot more would make that case for his showdown with Golovkin at Madison Square Garden. Yet as is his custom, Derevyanchenko prefers to let the past be the past while focusing on the future.

“I saw those fights a lot of times, so of course I know my mistakes and I’m trying to fix everything,” he said. “Of course, when I went back to the gym after those fights, I was working on it, and I’m always working to be better than I was before. I’m also going to keep doing what I’m doing, so it (training camp) is similar with a few changes in training partners with different styles for every fight.” 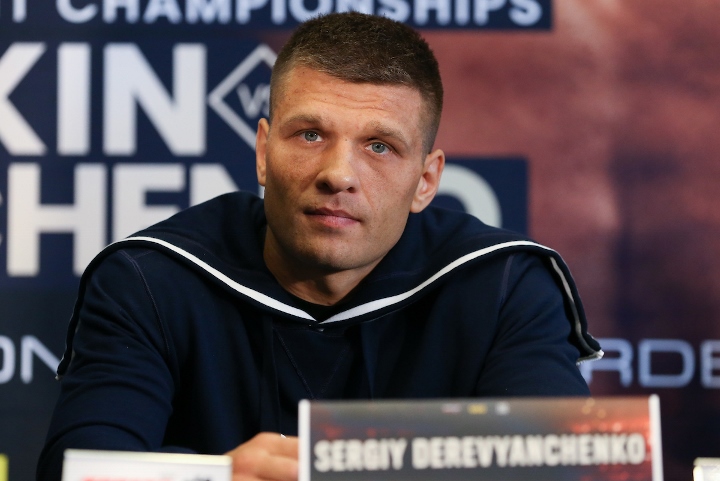 And though the losses were disappointing, sometimes – not often, but sometimes – boxing can be fair, so though he had to defeat Jack Culcay in April of 2019 to get another crack at the belt after losing to Jacobs, following the Golovkin fight, there was no question that he was going to be back in a big fight as soon as possible.

Unfortunately, that soon as possible is nearly a year since his meeting with GGG.

“After the Golovkin fight, I rested very well and after this fight, I probably should rest a little less than one year,” he said. “I think six months is fine and I will be ready for the next fight after Charlo.”

But hey, a world championship does deserve a little vacation, right?

“I think, yeah,” laughs Derevyanchenko, who has been a Brooklyn resident for several years now, though he does get back home to recharge his batteries whenever he can.

“I’m in New York, but sometimes I come back to Ukraine,” he said. “I have family and good friends there. When I’m back home, I’m relaxed, and when I come back, I have a lot of power.”

He’ll need it against Charlo, unbeaten and virtually untouched as a pro with the 30-0 (22 KOs) record to prove it. Yet while the Texan’s wins are a testament to his status as one of boxing’s best, he’s never been in a dogfight like Derevyanchenko was against Golovkin and Jacobs. Yes, Austin Trout pushed him in their 2016 meeting, but there never seemed to be a time where it looked like Charlo might lose. That experience, along with those hundreds of amateur fights, will serve Derevyanchenko well on September 26.

“Of course, my amateur experience gave me a lot in my professional career,” he said. “I understand that I have this, so I’m mentally ready for this fight because in my amateur career, I had fights with a lot of good boxers, world champions. And when I came to the USA, not all my opponents were good like Charlo, of course, but I was ready for those fights since my first professional fight. My experience has helped me always. I can get a feel for the opponents, work with them in the ring and after one, two, three rounds, I can figure them out a little bit better than maybe Charlo can.”

If Charlo gets off fast and puts Derevyanchenko down early like Jacobs and Golovkin did, it will put the Ukrainian in a hole most would have trouble digging out of. But “The Technician” has been there before, almost pulling off the wins that would have earned him a world title. He gets another shot in Connecticut, and just like Rozier correctly predicted a strategic war in the Golovkin fight, Derevyanchenko is ready for more of the same against Charlo.