Derevyanchenko Promises To Be More Aggressive And Push Jermall Charlo

Sergiy Derevyanchenko has previously gotten close, but the proverbial cigar by way of a big win has escaped him against elite opposition.

Derevyanchenko’s (13-2, 10 KOs) two losses have come to the hands of Daniel Jacobs in 2018 and Gennadiy Golovkin in 2019 in competitive clashes of which some observers argued he was the victor.

The 34-year-old wants to make sure he doesn’t leave anything up for debate by scoring a decisive win against Jermall Charlo (30-0, 22 KOs) when he takes on the undefeated WBC middleweight champion Sept.26 on Showtime pay per view in what will be a six-fight twin bill produced by the premium cable network.

“Jermall Charlo is a tough fight and wonderful fight,” Derevyanchenko said in an Instagram Live session with Premier Boxing Champions. “Yeah, I’m ready for this fight. I want to put more pressure and be more aggressive, and every round is easy. This is a good opportunity to take a belt. I’m so proud to be in this show.” 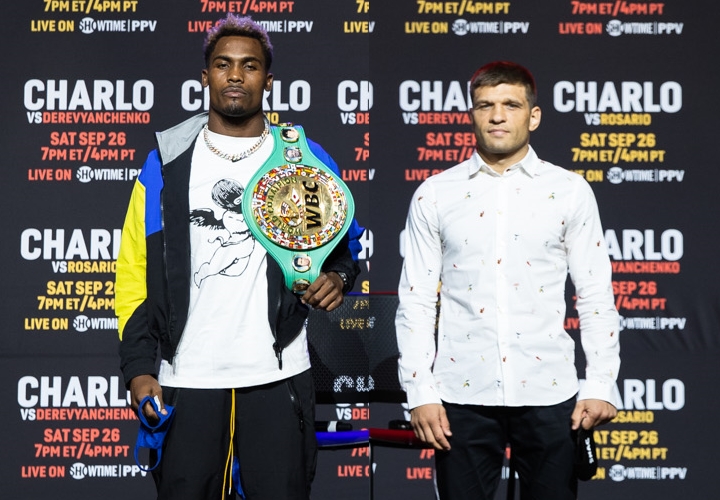 Charlo will face the toughest test in his career against Derevyanchenko, something the Ukrainian has already gotten a taste of.

Derevyanchenko admirably handled one of the sport’s most destructive knockout artists in Golovkin last year in a fight of the year candidate, and even dished out the most shots ever landed on the Kazakh KO artist.

“Every fighter has power and a good punch,” Derevyanchenko commented on Charlo’s power. “I’m ready. Let’s see on the 26th, let’s do a good fight, and we’ll see who is better ... Every fight I want to [put on a] show when people watch my fights.”

Derevyanchenko is looking to learn from his losses and clean up his miscues to come away victorious against the 30-year-old, Houston native Charlo.

The 2008 Olympian billed as “The Technician” has compiled an extensive amateur career with a record of 390-20. He credits trainer Andre Rozier as an important motivating factor and is planning on leaning on his experience to land a career-defining win.

“I’m ready. Let’s see on the 26th, let’s do a good fight, and we’ll see who is better,” said Derevyanchenko. “I want to show good boxing for those who see this fight. I want to show the best boxing show and fight of my life.”

“I don’t like to give predictions, but I know it’s a good fight and tough fight. It’s a good show, a very good show. We’ll see on Sept. 26, but I feel good, I’m rested, and training and I’m ready … My career is very long, and I have a good experience. I think it helps me in this fight. This is part of my job. Yes, I want to hear, ‘and the new champion of the world.'”

I have Derevyanchenko winning by decision. I just don’t trust the Charlo brothers. I don’t think they have really been tested by top opposition. They are all smoke and mirrors to me. And if Jermall does beat him, it will…

It's his only chance to win. He just may have to pay a hell of a cost because of it but the reward is more than worth the risk.